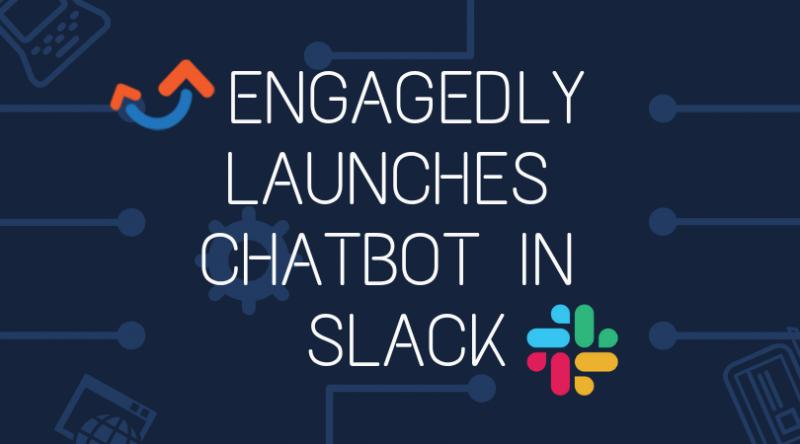 Engagedly launches first of its kind, Continuous Performance AI based SlackBot for Slack : Engagedly and Slack join forces to bring collaboration and employee engagement in one place. With Engagedly’s Chatbot, you can now perform various actions in Engagedly while still inside Slack communicating with your colleagues.St. Louis, May 22, 2019 - Engagedly announced today the launch of an AI based Continuous Performance chatbot for Slack that enables employees to access and command the Engagedly application from within the chat. EngagedlyBot helps you to share and request feedback, check in on your goals, reward and recognize your team and get notified on pending actions. Simply inviting @Engagedlybot to your Slack channels will add the Engagedly chatbot, which saves a lot of time, providing context to your performance and coaching discussions. Now people can have performance discussions where they already are instead of having to switch applications.Now the Engagedly’s chatbot on your Slack channel extends the functionality of engagedly using a conversational details about your feedback, goals, check-ins, discretionary points and public praises, adding perspective and knowledge to the conversation, while maintaining the conversational flow. The interactive buttons in a Slack channel open up a whole new world of opportunities for productivity. "With the changing communication modes at workplace, people want to have performance discussions where the context is" said Sri Chellappa, President of Engagedly, " We are excited that our cutting edge AI based SlackBot will enable more frequent conversations and drive our thesis of continuous performance to ultimately drive better organizational outcomes"Engagedlybot drives efficiency with: - Smart filtering to show what’s important : Engagedlybot cuts through spam by enabling smart filtering of data, based on data values and what action the user wants to take in their Engagedly accounts.- Intelligent automation: Engagedlybot’s intelligent automation acts based on the requested actions in Slack.About EngagedlyEngagedly is a progressive performance management and employee engagement software company based in St. Louis, MO with offices in India, Australia and the UK. Engagedly has many features, like 360 Multirater review, continuous feedback, goal setting, and more. The extremely customizable and user-friendly interface is perfect for any company looking to better engage employees and increase performance.Press Contact:William Miller Engagedly Inc. +1-650-4851642 sales@engagedly.com 911 Washington Avenue, Suite #660 St. Louis, MO 63101