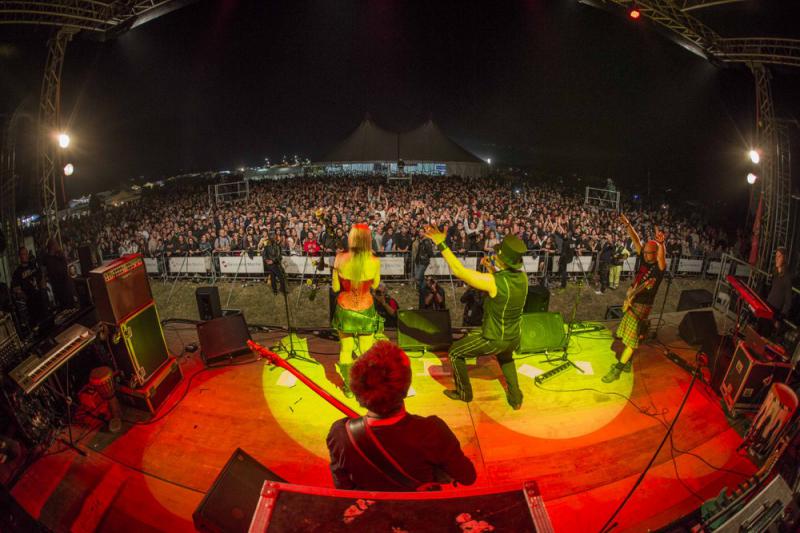 “In a time that permits no gathering without a project, no favour without a price, living in a space of friendship is a revolutionary act,” reads the 2019 Montelago Celtic Festival’s manifesto. Taking Tolkien’s notion of true fellowship as this year’s moniker, the Festival once again welcomes the energetic bonhomie of 20,000-plus enthusiasts as they escape to the alpine plains of Colfiorito on the Umbria-Marche border of central Italy from 1st-3rd August.The 2019 music programme features 21 bands from six countries, and marks the return of several international & local favourites, along with a host of new faces and sounds. Asturian gaita maestro Hevia makes his second festival appearance, as does world fusion group Beltaine from Poland. Among the first-timers are Spanish folk-metal institution Mägo de Oz; Finnish group Steve ‘n’ Seagulls with their country-bluegrass reinterpretions of hard rock and metal classics; BBC 2017 Folk Band of the Year, Talisk, from Scotland; and north Italian band Folkstone with their explosive mix of folk, rock and metal. The festival kicks off on Thursday night with the European Celtic Contest – showcasing Europe’s best up-and-coming musicians – and finishes at daybreak on Sunday 4th.While music is the Festival’s foundation, there are plenty of other attractions and participatory events, which have significantly expanded over the years and once again this year sees several intriguing additions:- 10 music and dance workshops ranging from bagpipes to banjo, and the gaita to Scottish dance - 10 craft workshops on diverse skills such as woodturning, weaving, ikebana, macramé and incense-making - traditional Irish and Gallic cooking classes - 14 cultural presentations in the Tolkien Tent, with topics such as black magic, elfin languages, Emily Dickinson and Shakespeare - falconry, archery and fencing - battle re-enactments and a medieval village - Celtic games such as tossing the caber and tug o’ war - 7-a-side rugby tournament - an extensive Celtic market - Celtic weddings presided over by priestesses for those wishing to tie the knot for a year and a day - fantasy storytelling course and competition - guided one- and two-day hikes through the surrounding alpine terrain for those wishing to take nature’s path to the festival Services include free parking; food and beverage stands featuring local and specialized products, including an award-winning Montelago craft beer and mead; an open-air market with fresh meat and vegetables; expansive camping area with a segregated section for families, including a baby park & babysitting services; cooling-off points; free wifi & phone charging stations; shuttle buses; breathalyzer testing; and a 24-hour field hospital. Montelago is eco-friendly, uses only biodegradable tableware, and enjoys the patronage of Italy’s largest environmental organization, Legambiente.Aside from events and activities, the soul of the festival is embodied in the Montelago community – Il Popolo di Montelago – which is both animated and harmonious, and it’s testament to this spirit of camaraderie that in 16 years there’s never been a single bad incident. It’s a place where friendships are forged and renewed every year, perhaps none more emblematic than Marco and Francesca, who met many years ago as neighbors in tent city, where they bartered charcoal for tent pegs. As the Festival’s vox populi declares: “Still after five years the two cross the Italian peninsula to meet again in Middle Earth, behind them a thousand kilometres, more than three hundred days and untold messages, for those three magical days in the mountains.” Further information: www.montelagocelticfestival.it info@montelagocelticfestival.it https://www.youtube.com/user/MontelagoCelticFest https://www.facebook.com/montelagocelticfestival https://twitter.com/MontelagoCF https://www.instagram.com/montelagocelticfestival/The Montelago Celtic Festival takes place every year over the first weekend in August amid the Apennine mountains on the Marche-Umbria border of central Italy. The Festival annually attracts over 20,000 enthusiasts from all opver Italy and beyond, and features some of Celtic music's biggest names.LA CATASTA SRLS Loc. Casali 12 62038, Serravalle di Chienti (MC) Italy