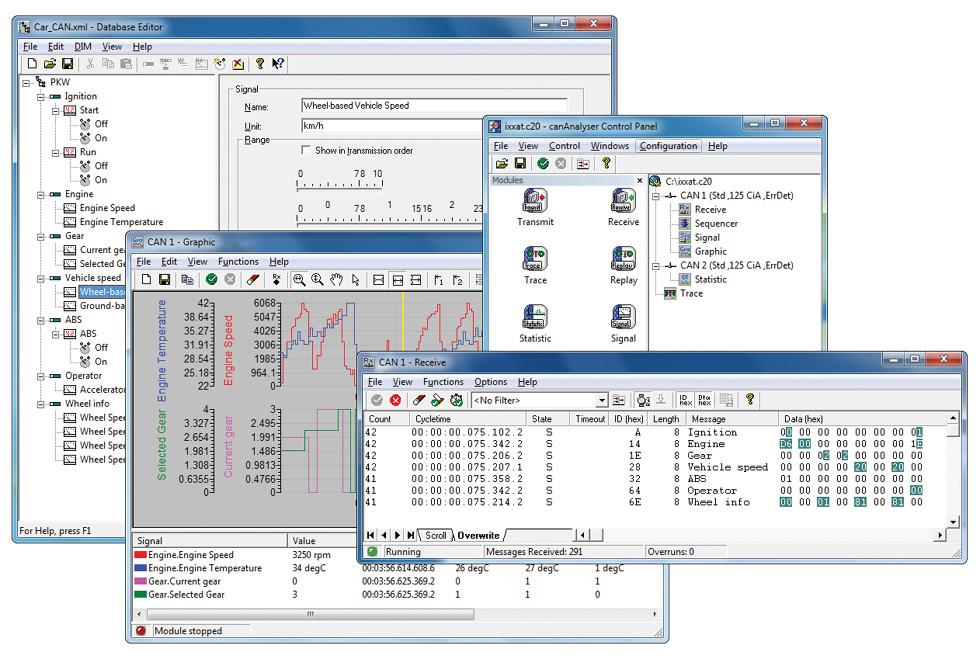 New features simplify operation and interaction with other tools IXXAT's canAnalyser is a powerful analysis tool for CAN, CANopen, SAE J1939 and DeviceNet systems. Both in the development area, for data analysis and device/system stimulation, and for commissioning and troubleshooting, the canAnalyser is successfully used worldwide and proven in practice.With the new version 2.8, canAnalyser was extended in terms of usability and interaction with other tools. canAnalyser and canAnalyser lite now allow the transfer of received messages from the receive module to the transmit module via “drag and drop” or to copy messages to the clipboard. The creation of transmit lists and the further processing of received messages is thus considerably accelerated and simplified. The ability to easily set reference time stamps was implemented to measure reception times in relation to other messages. In addition, the advanced CANdb import and export function allows both the rapid configuration of the powerful canAnalyser data interpretation engine and the simple export of configuration data for use in other tools.Customers already using canAnalyser version 2.7 can update to version 2.8 free of charge. Attractive update packages are available for those using older versions of canAnalyser. For further information about canAnalyser please visit www.ixxat.de/cananalyserIXXAT Automation is a leading provider of data communication products and services for the automation and automotive industries. The company focuses on industrial communication systems based on CAN (CANopen, DeviceNet), Ethernet (POWERLINK, EtherNet/IP, PROFINET, EtherCAT, Modbus TCP), and TCP/IP with the associated transport protocols. Solutions for the automotive industry are mainly based on CAN (diagnosis protocols, SAE J1939), FlexRay, and LIN. IXXAT is experienced in the development of safety-oriented hardware and software in compliance with IEC 61508. In addition to designing system solutions and developing hardware and software, IXXAT supports the implementation and application of CAN and TCP/IP communication systems and offers training and consultation. The extensive product portfolio includes interface cards, test systems, analytical tools, and protocol software. Currently, the company employs a staff of 80, mostly electronics engineers and computer scientists. IXXAT has an ISO 9001-certified quality management system.IXXAT Automation GmbHFrank PastorsLeibnizstr. 15 88250 Weingarten GermanyTel.: +49 . 751 . 561 46 - 0 Fax: +49 . 751 . 561 46 - 29 E-mail: info@ixxat.de WWW: www.ixxat.de

You can edit or delete your press release canAnalyser Version 2.8 here

10-01-2013 | Industry, Real Estate & Constr …
IXXAT Automation GmbH
Real-time operating system support for IXXAT's CAN interfaces
ECI driver for QNX, INtime, RTX and Linux With the current ECI driver IXXAT offers a powerful programming interface for its CAN PC interfaces, specially adapted to the requirements of embedded applications. CAN-based control and test systems can easily and quickly be achieved, both in the industrial and automotive area. The latest version of the ECI (Embedded Communication Interface) is available for the operating systems QNX (6.5.0), INtime (3.14, 4.2, 5.0), RTX
01-24-2013 | Industry, Real Estate & Constr …
IXXAT Automation GmbH
IXXEC-100 - The cost-effective EtherCAT Master solution for DIN rail mounting
With its new IXXEC-100, IXXAT offers a powerful and extremely flexible EtherCAT Master solution for DIN rail mounting at a very compelling price. The EtherCAT Master functionality is provided using the proven protocol software from acontis for EtherCAT Master Class A and B devices. A specially optimized link layer allows the IXXEC-100 to operate with cycle times of less than 1 ms. The selected EtherCAT Master implementation, as well as the
01-24-2013 | Industry, Real Estate & Constr …
IXXAT Automation GmbH
FRC-EP190 - Communication platform for automotive bus systems with extensive sof …
With its new FRC-EP190, IXXAT offers a universal hardware platform for FlexRay, CAN, LIN and K-Line with impressive performance, a reasonable price and a wide range of applications and solutions. With increasing complexity in automobile technology, suitable solutions for communication with the control units are required - whether for the development, test benches or test driving. Such solutions must be inexpensive, easy to operate and robust. With the FRC-EP150 and the
12-14-2012 | Industry, Real Estate & Constr …
IXXAT Automation GmbH
Software package for the development of CANopen applications under Microsoft Win …
IXXAT Automation is pleased to announce the immediate availability of version 6.1 of the CANopen Master API. In addition to previously supported CAN interfaces, CANopen Master API 6.1 now works with the new FPGA based CAN-IB200/PCIe active CAN interface. With the CANopen Master API, IXXAT offers a proven solution for a quick and easy development of PC based CANopen® control, test and service applications under Microsoft Windows. The new CANopen Master API