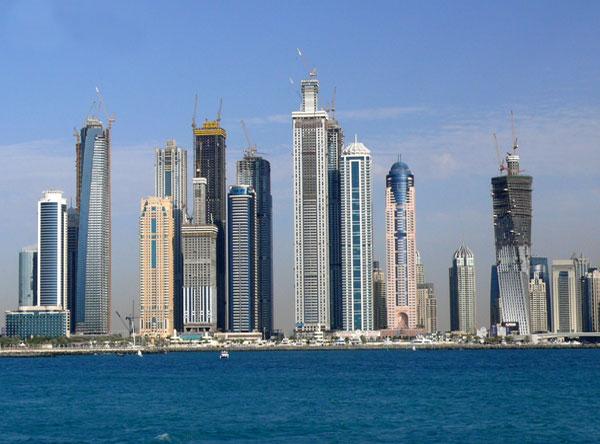 Dubai, UAE: Property in Dubai reached new heights this month as residential development ‘The Torch’ at Dubai Marina officially became the world’s tallest residential building.Developed by Select Group, one of the largest private property developers in the United Arab Emirates, The Torch beat the Q1 Tower on the Gold Coast of Australia by just twenty five metres when its completion was announced earlier this month.Designed by award winning architects Khatib and Alami, ‘The Torch’ rises 351 metres (1152 feet) into the Dubai sky. The tower has 86 floors containing a total of 676 apartments along with a gym, a sauna, a steam room and an eight level garage.It is the only one hundred percent residential project ever to break the world’s tallest tower record; under Guinness Book of Records regulations towers must be made up of ninety percent or more residential units to be eligible for the title.“The Torch, a defining landmark of Dubai Marina skyline, offering stunning views across the Jumeirah beachfront, is a sold out property and a testimony to Select Group’s continuing commitment to Dubai and the potential of its property sector as it gradually emerges from the shadows of the impact of the global financial crisis,” commented Mr. Rahail Aslam, CEO of Select Group.“This is a milestone for the Group and we are proud to be contributing to the list of global firsts Dubai has achieved over the years. We would like to position The Torch as our tribute to this cosmopolitan city which despite the downturn in the real estate sector and fluctuations in the economy has shown resilience to weather the extreme economic downturn,” he added.The Torch is the latest development to be completed by Select Group at Dubai Marina. Others include; The Point which was completed in 2009 and reaches a height of 125 metres with 27 floors and 188 apartments; and Botanica, a 41 floor development made up of 360 residential units.Despite the difficulties faced by property developers during the global economic downturn, Select Group has reported their properties at Dubai Marina are already enjoying up to 85 percent occupancy this year.Prices at The Torch start from US$205,000 for a one bedroom apartment with a balcony and views spanning the length of the Dubai Marina and Jumeirah Beach.Rebecca Smith Ocean Villas Group - http://www.oceanvillasgroup.comArticle source... http://blog.oceanvillasgroup.com/dubai-property-the-torch-sets-new-world-record/Rebecca Smith is a real estate journalist with more than 15 years experience. She is currently the sales director for Ocean Villas Group (http://www.oceanvillasgroup.com) who specialise in luxury ocean view property investments worldwide.Ocean Villas Group Pte. Ltd. Level 31, 6 Battery Road, Raffles Place, 049909, SingaporeTel: +65 63 208 359

03-04-2019 | Health & Medicine
Dr. Schumacher GmbH
Resounding success in Dubai
Dubai/Malsfeld – Dr. Schumacher GmbH has been a regular guest at Arab Health for more than a decade now. With over 4,150 exhibitors, the international event, held this year from 28th to 31st January in Dubai, is one of the world’s largest health trade fairs. This year, Dr. Schumacher GmbH managed to improve on the success of previous years yet again and welcomed a wide variety of trade fair visitors
12-05-2018 | Media & Telecommunications
Evops Marketing & PR
Dubai Tourism Inaugurates HITEC® Dubai 2018
HITEC Dubai 2018, the Middle East’s largest hospitality technology exhibition and conference, was officially inaugurated today by Issam Kazim, CEO, Dubai Corporation for Tourism and Commerce Marketing (DCTCM). Co-produced by Hospitality Financial and Technology Professionals (HFTP®) and Naseba, this year’s expo, which is taking place at the Madinat Jumeirah Dubai from 5-6 December, is showcasing a wide range of innovative solutions from the world’s leading hospitality technology providers. Travel technology has
11-19-2018 | Media & Telecommunications
Evops Marketing & PR
Dubai Tourism to Inaugurate ‘HITEC Dubai 2018’
HITEC Dubai 2018, the Middle East’s largest hospitality technology exhibition and conference, will be inaugurated by Dubai Tourism on 5th December 2018. The annual business-to-business (B2B) exhibition will give Middle East buyers, currently worth over USD 75 billion, access to the world’s leading technology solution providers and experts in the hospitality sector. Commenting on the critical role technology is playing in driving tourism, Issam Kazim, CEO, Corporation for Tourism and Commerce
02-19-2018 | Business, Economy, Finances, B …
Vinsys IT services (I) PVT LTD
PMP Dubai - PMP Training Dubai – Vinsys
PMP Training at Dubai By Vinsys. Register Now for The PMP Dubai Class Led by Highly Qualified and Certified Subject Matter Expert. Widely accepted as a global benchmark to recognize proficiency and skills in Project Management, the Project Management Professional (PMP Dubai) certification will certify an individual’s ability to successfully drive and manage a project. PMI’s Project Management Professional (PMP®) credential is recognized worldwide as the definitive industry-recognized certification for project
09-28-2016 | Science & Education
Web Design Dubai
Web Design Dubai
Fascinating web interfaces will definitely surprise people when they visit your website. An amazing Website design plus development is a combination of both art and science. A successful website design will definitely offers an appealing look and feel to attract your visitors but at the same time it also be capable of delivering what it needs to. Webarro is located in Dubai with capabilities to provide services like web development,
07-14-2011 | Media & Telecommunications
http://www.misuratatelecom.net/
Misurata Telecommunication Business Dubai
Dubai, with its advanced infrastructure, supports many business activities in tourism, real estate, telecom, IT and media. Extensive development in the field of technology has led to the growth of the telecommunication sector in Dubai. Numerous organizations are engaged in rendering high-end telephony solutions, which have contributed towards Telecom UAE. Misurata is one such organization, which has come up with numerous sophisticated services with the aid of its telecom engineers
Comments about openPR
Your portal is fast, simple, and easy to use. Others may have more functions but they also demand more editing time, you have to preformat the text in order to achieve a good result etc. I think openPR is really fantastic!
Andreas Knepper, wallmedien AG