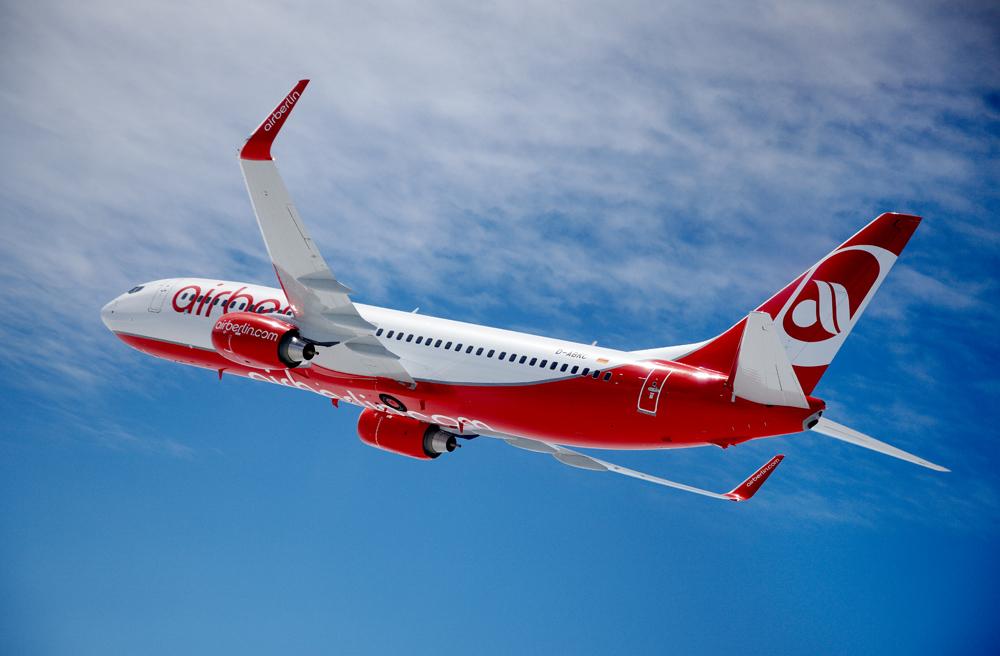 airberlin is increasing the number of flights to Dubai from Berlin-Tegel, starting with its winter schedule 2011/12. The new connections can already be booked. With this move, airberlin will become the only airline providing service between the German capital and Dubai five times a week. Domestically, the airline offers connections, for example, from Düsseldorf, Cologne-Bonn and Munich. For passengers from other European cities, airberlin also offers connecting flights from airports including Barcelona, Gothenburg, Helsinki, Copenhagen, Moscow, Stockholm, Vienna and Zurich. The new airberlin tickets can be booked immediately online (airberlin.com), around-the-clock in the company's service centre (Tel.: 01805-737 800, 0.14 €/minute from a landline, max. of 0.42 €/minute from mobile phone networks) and in travel agencies.airberlin is Germany's second largest airline. The company has a workforce of 8,900 employees. In 2010 alone, airberlin received over 10 awards for service and quality. The fleet comprises 169 aircraft with an average age of five years, making it one of the most modern fleets in Europe. The airline's state-of-the-art jets are highly fuel efficient, which contributes toward a long-term reduction in pollution emissions from aircraft. As one of major European airlines, airberlin currently flies to 163 destinations in 39 countries. In 2010, the airline carried 33.6 million passengers. airberlin has signed up for membership to the global airline alliance oneworld® and is expected to become a full member at the start of 2012. airberlin has been offering flights under codeshare agreements with American Airlines and Finnair since November 2010.Air Berlin PLC & Co. Luftverkehrs KG Press Office Saatwinkler Damm 42-43 D-13627 Berlin Tel.: + 49 30 3434 1500 Mail: abpresse@airberlin.com

10-05-2011 | Tourism, Cars, Traffic
Air Berlin
airberlin receives award from Fuerteventura Tourist Office
The Fuerteventura Tourist Office has conferred an award on airberlin for special services to tourism on the island. Pablo Caspers, Deputy Director airberlin for Spain & Portugal, accepted the award in the category “Playas de Plata” at a gala event attended by more than 200 invited guests drawn from politics and tourism. The judging panel emphasised in particular that airberlin had become an important economic factor for the island
10-05-2011 | Tourism, Cars, Traffic
Air Berlin
airberlin and Meridiana fly start codeshare flights
In the future airberlin and the Italian airline Meridiana fly will be offering flights from Italy to Germany under joint flight numbers. The agreement is implemented for flights departing from 30th October 2011. At the beginning of the winter flight schedule airberlin flights will be leaving from Bari, Brindisi, Catania, Florence, Milan, Naples, Olbia, Palermo, Rome, Venice and Verona for eight destinations in Germany within the framework of the codeshare agreement.
08-31-2011 | Tourism, Cars, Traffic
Air Berlin
airberlin and American Airlines expand codeshare agreement to include Canada
airberlin and American Airlines have added two Canadian destinations to their cooperation agreement. As of today, the codeshare agreement will also include the American Airlines flights from New York-JFK to Montreal and Toronto. The new destinations in Canada will be frequented several times per week and can be reached by airberlin passengers flying from Berlin and Düsseldorf, via New York. Since airberlin's winter flight plan, for the first time, will
08-19-2011 | Tourism, Cars, Traffic
Air Berlin
Board of Air Berlin PLC accepts resignation of Joachim Hunold - Hartmut Mehdorn …
Mr. Joachim Hunold's offer to step down as the company's CEO as per 1 September 2011 was accepted today by the Board of Directors of Air Berlin PLC with great respect. Mr. Hartmut Mehdorn, who has been a member of the Board of Air Berlin PLC since 1 July 2009, will assume the position as CEO for an interim period. Mr. Joachim Hunold will remain bound to the company as a

12-18-2020 | Politics, Law & Society
Fotis International Law Firm
Corporate Lawyers in Dubai
Fotis International Law Firm (the Firm) has successfully extended their operations to all the Emirates in the United Arab Emirates, after much demand and requests from clients. The Firm caters to the legal requirements of clients from across the globe on various legal and corporate matters. With dominant presence in the Middle Eastern region, the Firm is home to lawyers, legal counsels, dedicated researchers and consultants from over fifteen (15)
03-04-2019 | Health & Medicine
Dr. Schumacher GmbH
Resounding success in Dubai
Dubai/Malsfeld – Dr. Schumacher GmbH has been a regular guest at Arab Health for more than a decade now. With over 4,150 exhibitors, the international event, held this year from 28th to 31st January in Dubai, is one of the world’s largest health trade fairs. This year, Dr. Schumacher GmbH managed to improve on the success of previous years yet again and welcomed a wide variety of trade fair visitors
12-05-2018 | Media & Telecommunications
Evops Marketing & PR
Dubai Tourism Inaugurates HITEC® Dubai 2018
HITEC Dubai 2018, the Middle East’s largest hospitality technology exhibition and conference, was officially inaugurated today by Issam Kazim, CEO, Dubai Corporation for Tourism and Commerce Marketing (DCTCM). Co-produced by Hospitality Financial and Technology Professionals (HFTP®) and Naseba, this year’s expo, which is taking place at the Madinat Jumeirah Dubai from 5-6 December, is showcasing a wide range of innovative solutions from the world’s leading hospitality technology providers. Travel technology has
11-19-2018 | Media & Telecommunications
Evops Marketing & PR
Dubai Tourism to Inaugurate ‘HITEC Dubai 2018’
HITEC Dubai 2018, the Middle East’s largest hospitality technology exhibition and conference, will be inaugurated by Dubai Tourism on 5th December 2018. The annual business-to-business (B2B) exhibition will give Middle East buyers, currently worth over USD 75 billion, access to the world’s leading technology solution providers and experts in the hospitality sector. Commenting on the critical role technology is playing in driving tourism, Issam Kazim, CEO, Corporation for Tourism and Commerce
02-19-2018 | Business, Economy, Finances, B …
Vinsys IT services (I) PVT LTD
PMP Dubai - PMP Training Dubai – Vinsys
PMP Training at Dubai By Vinsys. Register Now for The PMP Dubai Class Led by Highly Qualified and Certified Subject Matter Expert. Widely accepted as a global benchmark to recognize proficiency and skills in Project Management, the Project Management Professional (PMP Dubai) certification will certify an individual’s ability to successfully drive and manage a project. PMI’s Project Management Professional (PMP®) credential is recognized worldwide as the definitive industry-recognized certification for project
09-28-2016 | Science & Education
Web Design Dubai
Web Design Dubai
Fascinating web interfaces will definitely surprise people when they visit your website. An amazing Website design plus development is a combination of both art and science. A successful website design will definitely offers an appealing look and feel to attract your visitors but at the same time it also be capable of delivering what it needs to. Webarro is located in Dubai with capabilities to provide services like web development,
Comments about openPR
We publish our press releases on openPR.de because we like people who are "open" - just like us.
Frank Obels, CEO, INCONET - Informationssysteme, Communication und Netzwerkberatung GmbH