Bulgari to open new property in London Knightsbridge for 2012 Olympics 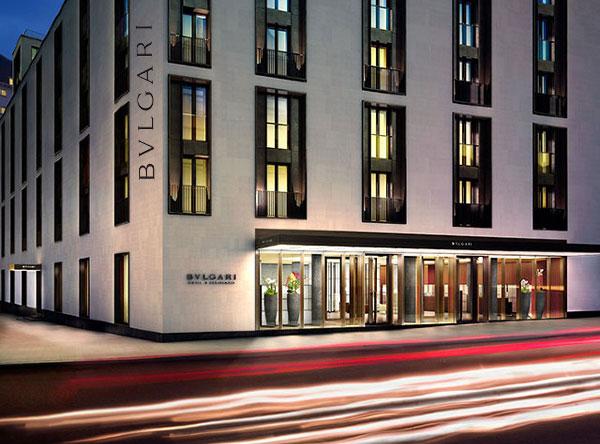 Luxury Italian brand Bulgari has just received approval for a new luxury hotel in London’s exclusive Knightsbridge area.The Bulgari Hotel and Residences are due to be completed in May 2012, just before the start of the 2012 London Olympics. The new luxury hotel will have seventy eight rooms and five apartments, with six apartments and a penthouse available for sale to private investors.CEO of Bulgari Group, Francesco Trapani, commented; “We are extremely proud to be able to open a Bulgari Hotel in the heart of London, something that we have wanted to do for a long time. This hotel - the first new build luxury hotel in London for over 40 years - will be another important element in the Bulgari Hotels & Resorts project. I’m convinced that it will be a further statement of our brand in the UK, which is a strategic market for luxury goods.”The Bulgari Hotel and Residences will replace the Normandie Hotel which was demolished to make way for the new building. The original building was constructed in 1911 and became the Knightsbridge Palace Hotel. It was renamed the Normandie Hotel in 1937. The Normandie Hotel finally closed its doors in 1977 when the upper floors were converted to apartments for holiday lets. Since 1987 the building has been awaiting redevelopment and several proposals have been submitted for a new hotel.The most recent was in 2006 when Waterloo Real Estate were given permission to build a 155 room hotel. The company sold the project to three investors in 2007.The Bulgari Hotel and Residences will be designed by Italian architect Antonio Citterio, who also designed Bulgari’s other two hotels in Bali and Milan.“Constructing a new building in this part of London is an extraordinary achievement because the city tends to be extremely conservative due to its consolidated urban plan. The architectural style of the project reflects the rigour of the Bulgari Hotel in Milan: its classic, solid, contemporary style will consolidate the urban landscape in an area of London that is undergoing a profound transformation. In this sense, the use of Portland stone and bronze, which are typical materials of the architectural style of public buildings in London, and the meticulous façade design reveal a rigorous, modern approach to the theme.” opined Citterio.The site is close to the London landmarks of Harrods, Harvey Nichols, The Royal Albert Hall, The Natural History Museum and Hyde Park.Bulgari originally started as an Italian jeweller and luxury goods retailer run by its Greek founder Sotirio Voulgaris.Voulgaris began his career as a jeweller in his home village of Paramythia in Epirus, Greece. His original shop is still there today.In 1881 Voulgaris moved to Rome and in 1884 he founded Bulgari, opening his second shop on the Via Sistina in the Italian Capital.The company’s flagship store on the Via Dei Condotti in Rome opened in 1905. It quickly became the place for the world’s rich and famous to buy unique, high quality jewellery designs which combined Roman and Greek art.During the 1970’s Bulgari opened its first international stores in New York, Geneva and Monte Carlo, along with a showroom at the New York Pierre Hotel.Today Bulgari has two hundred and thirty retail outlets worldwide.Bulgari moved into the hotel market in 2001 when they signed a joint venture with Mariott International, the American hotel operator.The plan was to invest US$140 million over five years to develop hotels in London, Paris, New York, Miami and Southern California.To date Bulgari has only opened hotels in Bali and Milan.Bulgari is one of a number of high profile fashion brands expanding into the hotel market at the moment. Others include; Versace, Ferragamo, Christian Lacroix, Giorgio Armani, Moschino and Missioni.Rebecca Smith Ocean Villas Group - http://www.oceanvillasgroup.comArticle source... http://blog.oceanvillasgroup.com/bulgari-to-open-new-property-in-london-knightsbridge-for-2012-olympics/Ocean Villas Group are specialists in lifestyle and investment property worldwide and are committed to supporting investors in both the emerging and established property markets across the globe.Level 31, 6 Battery Road, Raffles Place, 049909, Singapore