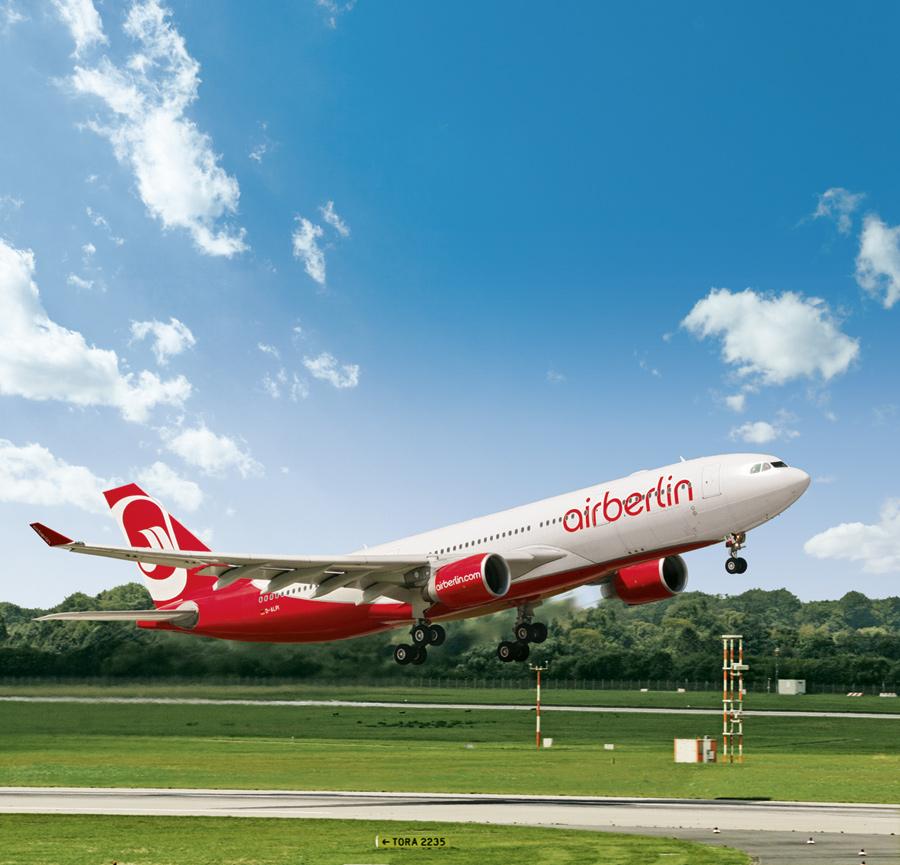 As of today, airberlin connects the two metropolises, Berlin and New York, with a non-stop flight. Flight AB7248 will be serviced using an Airbus A330-200. The flight with 289 passengers on board started from Berlin-Tegel at 1:00 p.m. and is expected to land at JFK airport in New York at 3:45 p.m. local time. Together with the guests of honour, His Honour Philip D. Murphy, United States Ambassador to Germany and Matthias Platzeck, the Prime Minister of the State of Brandenburg, Joachim Hunold, CEO of airberlin, and Prof. Dr. Rainer Schwarz, Chief Executive Officer of Berlin Airports, inaugurated the new flight with a traditional maiden flight ceremony. Prof. Dr. Rainer Schwarz, Chief Executive Officer of Berlin Airports said: "The global networking of Berlin continues to advance: Our partner airberlin's non-stop connection between Tegel and New York is already the 13th long-haul connection starting out in Berlin. This carries forward our success story, which has really gained in momentum during the past year as a result of establishing the airberlin hub at Tegel. airberlin's imminent admission into the airline alliance oneworld is a huge opportunity for the people in this region to be even better connected to the countries and markets in the world. As of June 2012, the new airport BBI (Berlin Brandenburg International) will offer the airlines an outstanding infrastructure for expansion in terms of quality and quantity."His Honour Philip D. Murphy, United Stated Ambassador to Germany commented: "airberlin is Berlin's air carrier; it has been playing an important role in linking the capital to the rest of the world for some time. We are extremely pleased that airberlin is bringing Berlin and the United States of America closer together. Thanks to their membership in the oneworld alliance, airberlin makes it easier for Germans and Americans to book connecting flights and to discover each other's respective countries."Matthias Platzeck, the state prime minister said: "airberlin focused on the region of the capital city at an early stage and is our 'Home carrier' at the new Berlin Brandenburg airport in Schönefeld. The accessibility of the region and the networking with markets on the North American continent will be improved further as a result of the new long-haul connection. Our region is becoming increasingly attractive for intercontinental connections and airberlin is an important driving force for this." Joachim Hunold, CEO airberlin: "With the new year-round non-stop connection between Berlin and New York, we want to do our part in bringing the two world metropolises closer together and to further strengthen the friendly relationships between Germany and the United States. Together with American Airlines, we are giving passengers from Germany and the USA the opportunity of profiting from the extensive range of flights offered by the respective partners. Starting this November, we will also be gradually upgrading our long-haul product with new seats in the economy and business class as well as with modern high-tech in-flight entertainment. The continual further development of our goods and services not only makes us the first choice with many passengers in Germany but increasingly also with international travellers. Joining the oneworld airline alliance in the coming year will strengthen this development even further."Effective 1 May 2011, airberlin will service the flight route Berlin-New York four times weekly (Mondays, Wednesdays, Fridays, Sundays) with a non-stop flight. The connecting flights originate in various German and European cities. Codeshare connecting flights to eight American Airlines destinations are in existence in New York. After Miami, New York is the second North American destination which airberlin offers non-stop from Berlin-Tegel. The airline's route network in North America includes a total of six destinations, namely New York, Miami, Fort Myers, Los Angeles, San Francisco and Vancouver. Non-stop connections with all six North American destinations exist from Düsseldorf.About airberlin: airberlin is Germany's second largest airline. The company has a workforce of 8,900 employees. In 2010 alone, airberlin received over 10 awards for service and quality. The fleet comprises 169 aircraft with an average age of five years, making it one of the most modern fleets in Europe. The airline's state-of-the-art jets are highly fuel efficient, which contributes toward a long-term reduction in pollution emissions from aircraft. As one of major European airlines, airberlin currently flies to 163 destinations in 39 countries. In 2010, the airline carried 33.6 million passengers. airberlin has signed up for membership to the global airline alliance oneworld® and is expected to become a full member at the start of 2012. airberlin has been offering flights under codeshare agreements with American Airlines and Finnair since November 2010.Air Berlin PLC & Co. Luftverkehrs KG Press Office Saatwinkler Damm 42-43 D-13627 Berlin Tel.: + 49 30 3434 1500 Mail: abpresse@airberlin.com

You can edit or delete your press release airberlin: Festive Launch of Maiden Flight from Berlin to New York here

10-05-2011 | Tourism, Cars, Traffic
Air Berlin
airberlin receives award from Fuerteventura Tourist Office
The Fuerteventura Tourist Office has conferred an award on airberlin for special services to tourism on the island. Pablo Caspers, Deputy Director airberlin for Spain & Portugal, accepted the award in the category “Playas de Plata” at a gala event attended by more than 200 invited guests drawn from politics and tourism. The judging panel emphasised in particular that airberlin had become an important economic factor for the island
10-05-2011 | Tourism, Cars, Traffic
Air Berlin
airberlin and Meridiana fly start codeshare flights
In the future airberlin and the Italian airline Meridiana fly will be offering flights from Italy to Germany under joint flight numbers. The agreement is implemented for flights departing from 30th October 2011. At the beginning of the winter flight schedule airberlin flights will be leaving from Bari, Brindisi, Catania, Florence, Milan, Naples, Olbia, Palermo, Rome, Venice and Verona for eight destinations in Germany within the framework of the codeshare agreement.
08-31-2011 | Tourism, Cars, Traffic
Air Berlin
airberlin and American Airlines expand codeshare agreement to include Canada
airberlin and American Airlines have added two Canadian destinations to their cooperation agreement. As of today, the codeshare agreement will also include the American Airlines flights from New York-JFK to Montreal and Toronto. The new destinations in Canada will be frequented several times per week and can be reached by airberlin passengers flying from Berlin and Düsseldorf, via New York. Since airberlin's winter flight plan, for the first time, will
08-19-2011 | Tourism, Cars, Traffic
Air Berlin
Board of Air Berlin PLC accepts resignation of Joachim Hunold - Hartmut Mehdorn …
Mr. Joachim Hunold's offer to step down as the company's CEO as per 1 September 2011 was accepted today by the Board of Directors of Air Berlin PLC with great respect. Mr. Hartmut Mehdorn, who has been a member of the Board of Air Berlin PLC since 1 July 2009, will assume the position as CEO for an interim period. Mr. Joachim Hunold will remain bound to the company as a