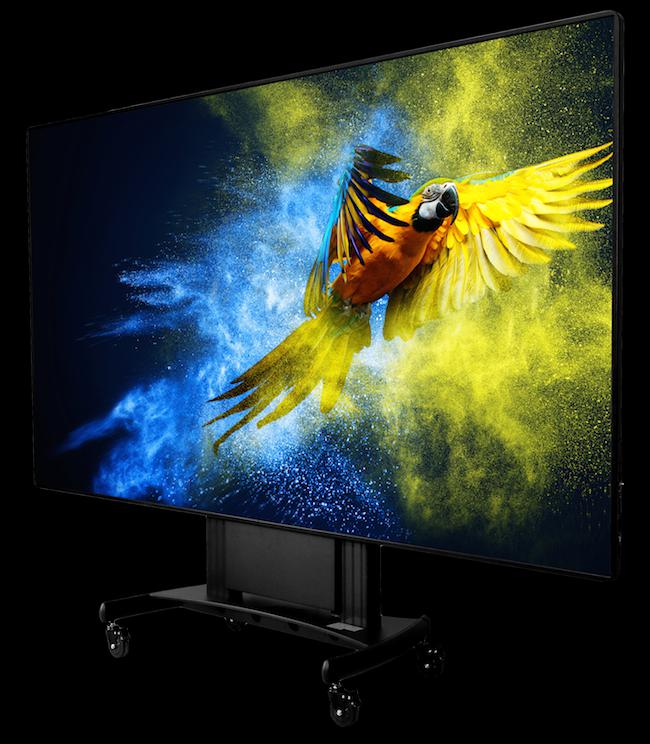 Calibre UK announces that the FHDQ130 130” AiO (All-in-One) LED Wall is available for immediate delivery. Powered by the in-built Calibre’s LEDView series scaler/switcher bringing UltraHD capability to LED screens, the FHDQ130 is a 130" Full HD LED Videowall that, unlike some competing products, is fully CE, CB and UL approved. Weighing just 125 kilograms/275.5lbs it can be built ready to run in under an hour by three people. Maintenance is similarly straightforward: a single module can be replaced in less than ten seconds. Control of the AiO is equally simple, via either a remote or an app. The AiO LED display also responds to the growing focus on minimising energy consumption: in standby mode, it consumes less than 0.5 Watts. The AiO is constructed from a four-in-one SMD LED that measures 1.5mm pitch for outstanding picture quality and clarity. It can be positioned in portrait and landscape mode and is one of the thinnest screens available on the market measuring just 3.8mm in depth. It has multiple inputs including HDMI and 3G-SDI for live in-camera use making this the perfect product for demanding applications including professional AV, Staging, Broadcast, Houses of Worship, medical, corporate AV and education and much more. “The AiO the result of feedback from our customers requiring a single solution that minimises set up time, is plug-and-play and ready to go,” said Willy Tsai, Managing Director at Calibre UK. “Our solutions are increasingly used in a verity of challenging environments requiring higher brightness levels, clarity and better colours. We are delighted to be delivering them to market so soon after announcing them, and we’re sure they will find many admirers among our existing and new customers.” The award-winning product was developed with sister company Optoma - also part of Coretronic – the AiO is designed to address one of the biggest drawbacks to LED display – the time it takes to deploy them. Fresh from being launched at Prolight + Sound in Frankfurt during April and at the Calibre UK official launch in Taipei this month, the AiO solution will make its Asian debut at InfoComm South East Asia trade show (Calibre Stand E62 at Bangkok International Trade and Exhibition Centre (BITEC), Hall 98, Thailand from 15-17 May 2019). Multi-award-winning British company Calibre is a pioneer in image processing technology. Over the past 30 years, it has achieved world recognition with the Queen’s Award for Enterprise and was one of the designated brands for video processing in the Olympic Games. Calibre is a market leader with innovation, providing image scaling and processing technology for use in broadcast and television, large venue projection and LED videowalls. Calibre became part of Coretronic Corporation in August 2017, which is a milestone in the global chain of the Coretronic Group. Coretronic will continue expanding its international market share, cultivating the industry’s best talent, innovating in technology and providing each customer with added value. www.calibreuk.com Cornwall House, Cornwall Terrace, Bradford, BD8 7JS calibre@greatcentralian.com Phone +14153495778

12-03-2019 | IT, New Media & Software
Calibre UK Ltd
Inter BEE demonstrates Calibre’s continuing success
Evidence of the increasing popularity of Calibre UK’s market-leading solutions, and of its rapidly growing network of partners, could be found at the recent Inter BEE (International Broadcast Equipment Exhibition) in Japan. At the Makuhari Messe in Chiba City, Calibre’s range was present on the stands of two exhibitors - Techno House and ARK Ventures. Techno House distributes the HQPro1000 and LEDView scaler/switcher products, while AZBAY – of whom ARK
05-15-2019 | Media & Telecommunications
Calibre UK Ltd
Calibre Transforms Digital Signage Creative Possibilities with LED SmartBrick
Opens up new creative opportunities for deployment Being previewed by Calibre at InfoComm SEA (Stand E62, Bangkok International Trade and Exhibition Centre (BITEC) Hall 98, Thailand, 15-17 May 2019) is the Calibre LED SmartBrick, an innovative product designed to increase the reach and potential creativity of digital signage installations. Where the majority of LED-based displays for digital signage are based on industry standard form factors (16:9, 5:4, 4:3), the three models
03-22-2019 | Media & Telecommunications
Calibre UK Ltd
Calibre Sets Focus at Prolight + Sound
At Prolight + Sound (2-5 April, Messe Frankfurt, Hall 4, Stand B35) Calibre will be presenting two compelling new products for the first time in a global launch. “Over the coming months, the industry will see a number of changes from Calibre and we intend to offer our customers much more than we have ever done before. Visitors to Prolight + Sound will be the first to see some of
10-01-2018 | Media & Telecommunications
Calibre UK Ltd
Extended Warranty now Available
Calibre UK Ltd a subsidiary of the Coretronic Corporation of Taiwan is pleased to announce the launch of its new extended warranty program for the Calibre HQView, LEDView, HQUltra and HQPro series of Switcher-Scalers. These ranges are already supplied with a 3 year RTB warranty from the factory and from today customers are able to easily extend that warranty at their time of purchase from 3 to 5 years for a