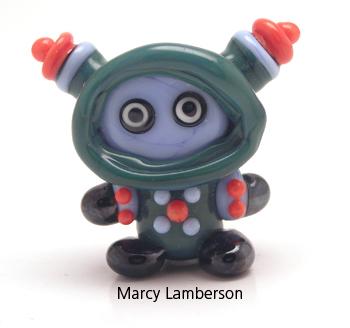 Marietta, Georgia – April 25, 2011 A hand-crafted glass bead, created by local teen artist Nick Shook, was selected by Beads of Courage to go to space and back on NASA’s STS-134 mission. The artwork, titled Rocket Ship is part of Beads of Courage and NASA’s Beads in Space project. The STS-134 mission is scheduled to launch on April 29, 2011. Four artists were chosen from Georgia. Nick Shook’s was selected in a contest for glass bead makers around the world. A panel of bead crafting experts and Beads of Courage volunteers selected 39 beads from 32 different artists. Collectively, the beads weigh precisely sixteen ounces, the maximum allowed by NASA for the flight. Nick Shook is a sixteen year old who has been working with glass for about a year and a half. He is does good work for the time he has spent working with glass. He can be contacted via Facebook. Beads of Courage programs are currently employed at over 90 hospitals worldwide. At the center of this arts-in-medicine program are decorative glass beads similar to the beads that will accompany the Space Shuttle Endeavor. Children who participate in the program are given a length of string along with letter beads that spell out their name. As they undergo their healing process, they receive beads that represent different treatments and milestones. Their growing beaded necklaces stand as pieces of art that symbolize their medical histories and allow the kids to share and reflect on their experiences. Upon their return, the beads will join the Beads in Space traveling exhibit. The exhibit contains beads that flew on STS-132, the final mission of the Space Shuttle Atlantis in May 2010. Beads in Space is traveling to each city with hospitals participating in the Beads of Courage program. Its next stop is in Birmingham, Ala. Replicas of the beads that flew on STS-132 are available for purchase at BeadsInSpace.com. Proceeds support Beads of Courage programs worldwide. This NASA mission is the last flight of the Shuttle Endeavor. It is commanded by Mark Kelly. Kelly is married to U.S. Congresswoman Gabrielle Giffords, the target of an attempted assassination in Tucson, Ariz., on January 8, 2011. Beads of Courage is headquartered in Tucson. The Beads in Space project is the brainchild of Jamie Newton, an employee at the Marshall Flight Center in Huntsville, Ala. Newton’s daughter has been battling cancer and is a participant in the Beads of Courage program. He pursued this idea in hopes to raise awareness about Beads of Courage and the work the organization does helping children undergoing medical treatment. “We are very grateful for the dedication and enthusiasm of all our artists, not just in this special program, but every day of the year. Without their help, Beads of Courage just wouldn’t exist,” said Jean Baruch, Executive Director of Beads of Courage. “We are very fortunate to be given another opportunity to work with NASA to send such fine artwork into space. These missions bring inspiration to many children and their families battling serious illnesses.”Beads of Courage is a non-profit organization, based in Tucson, Ariz., focused on arts-in-medicine programs geared toward helping children cope with serious illnesses. Patients are given beads to represent significant treatment milestones during their journey. Beads of Courage programs have helped thousands of children and their families at over 90 hospitals in the U.S, Japan and New Zealand. More information is available at www.beadsofcourage.org.Jean Baruch Beads of Courage, Inc. 10501 E. Seven Generations Way Suite 161 Tucson, AZ 85747 520.331.1984 jbaruch@beadsofcourage.org