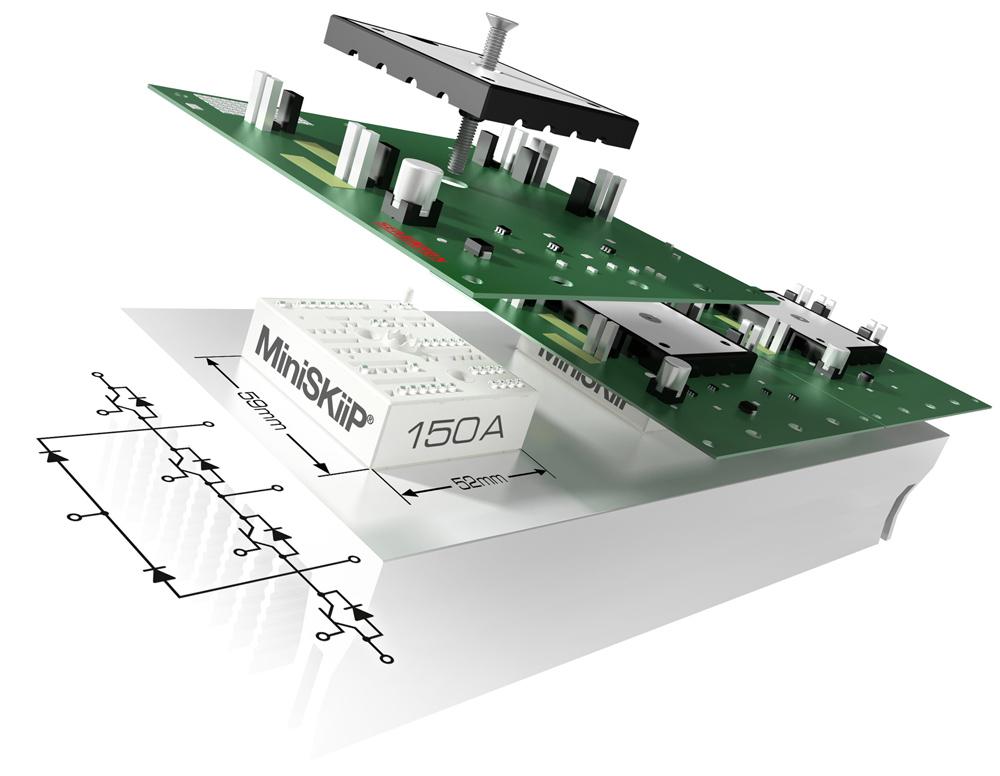 Nuremberg, 27 April 2011 - Semikron presents its newest MiniSKiiP IGBT power semiconductor module, which is now also available in 3-level topology. The new module boasts a rated current of 4.9 A/cm², the highest rated current per unit of area in comparison to competitor products, and one phase leg per module, enabling the development of compact inverters with output power of up to 85 kVA. The MiniSKiiP is characterised by the fast and easy single-screw assembly and therefore optimised for the efficient manufacture of 3-level solar inverters and UPS systems. The rated current per unit of area is up to twice that of other 3-level modules. Since no solid busbars are needed between the three phases/modules, more compact inverters can be made. The reverse voltage of the IGBTs and diodes used has been increased to 650 V to enable DC link voltages of 900 V for 480 V three-phase power applications typical in commercial or industrial settings in the United States. Each module has a 3-level phase leg with sufficient space for ten power semiconductors each.Across the world, more than 15 million MiniSKiiP modules are in use in drives and frequency converters. The success of this module platform continues in the new 3-level topology, which improves electrical efficiency and makes power converters more efficient. Thermal and electrical connection between the module and the heat sink and the driver board is established with a single screw or two screws for rated module currents of up to 150 A or 200 A, respectively. This means that solder equipment and time-consuming soldering processes are done away with in the assembly stage. For solar inverter output power of 60 kVA and above, i.e. for rated current of 150 A and higher, modules with screw connections were previously used for the busbars. Thanks to MiniSKiiP 200 A 3-level modules, the busbars can be replaced with cheaper PCBs in inverters with outputs of up to 85 kVA. Former complex 8-screw connections have been reduced to simple 2-screw-assembly solutions.“Owing to the efficiency gain, 3-level technology is set to become standard in solar inverters and UPS systems in the very near future,” comments Thomas Grasshoff, Head of International Product Management, referring to the trends on these markets. In the drives sector, MiniSKiiP modules have already gained a strong footing thanks to their fast and easy assembly.The 3-level product range from Semikron covers rated currents of 20 A to 600 A: featuring SEMITOP solder modules for up to 150 A, MiniSKiiP spring contact modules for up to 200 A and SKiM screw connection modules for up to 600 A.Semikron is an internationally leading power semiconductor manufacturer. 2011 marks the 60th anniversary of the German-based family enterprise which employs 3600 people worldwide. A global network of 35 companies with production plants in Brazil, China, France, Germany, India, Italy, Korea, Slovakia, South Africa and USA guarantees fast and competent on-site customer care. Semikron is a one-stop provider of chips, discrete semiconductors, transistor, diode and thyristor power modules, power assemblies and systems for markets such as industrial drives, wind and solar, hybrid and electric vehicles, the rail industry and power supplies. Globally Semikron technology powers nearly every second windmill. According to a survey carried out by BTM Consult ApS, the total wind power capacity installed until 2009 was 122 Gigawatt. 57 Gigawatt comprises power semiconductors from Semikron. The dedication to the hybrid and electric vehicle market is evident in the development and production of power semiconductors for this market but also the majority take-over of Compact Dynamics GmbH, a development specialist for innovative control systems, the joint venture with drivetek, a provider for application-specific control technology, and the take-over of VePOINT, developing and producing inverters, DC/DC converters and chargers. Semikron is the market leader in the field of diode/thyristor semiconductor modules, enjoying a 30% share of the worldwide market. (Source: IMS Research „The global power semiconductor market 2010”)www.semikron.com.SEMIKRON INTERNATIONAL GmbH Annette Müller Manager International Communications Sigmundstr. 200 90431 Nürnberg Tel: +49-(0) 911-6559-158/ Fax: +49-(0) 911-6559-77158 annette.mueller@semikron.com

You can edit or delete your press release IGBT module tops the competition in current density: 4.9 A/cm² for 3-level inverters here

02-25-2019 | Energy & Environment
GD Rectifiers
SEMIKRON Product Catalogue 2018/2019 by GD Rectifiers
Semikron boosts a range of over 11,6000 different power semiconductors from 1Kw to 10MW, including chips, discrete diodes and thyristors, power modules (IGBT/MOSFET/diode/thyristor/CIB/IPM), driver and protection components and integrated subsystems. Amongst many other pioneering developments, in 1974 Semikron invented the world's first isolated power module, the Semipack. In 1996 Semikron also launched the MiniSKiiP – the first integrated IGBT rectifier circuits in solder-free spring contact technology. With more than 35 million modules
10-29-2018 | Energy & Environment
GD Rectifiers
SEMIKRON - Your Ultimate Partner in Power Electronics by GD Rectifiers
Discover more about SEMIKRON’s SEMiX and MiniSKiiP product ranges In the world of electronics today, the way to guarantee maximum supply chain safety is to use industry standard power modules. SEMIKRON’s portfolio covers all the standard packages and are fully compatible and provide added value in the form of optimisations. By continually expanding their SEMiX and MiniSKiiP production capacities, they are able to meet our customers growing needs. What’s more, their application
07-26-2018 | Energy & Environment
GD Rectifiers
SEMIKRON's SiC Power Modules Available at GD Rectifiers
SEMIKRON’s SiC Power Modules feature leading chip and packaging technology for the highest energy efficiency. The Full/hybrid SiC modules range from 10kw up to 350kw in 1200V and are typically used in the following applications: solar inverters, energy storage systems and motor drives. Both the hybrid and full silicon carbide power modules combine the benefits of proven industry standard power modules with SEMIKRON packaging technologies. A low module commutation inductance allows
04-12-2018 | Science & Education
GD Rectifiers
Silicon Carbide (SiC) is a Popular Choice for Power Electronic Devices
As more engineers choose to use silicon carbide, we look at the benefits SiC has to offer. Silicon Silicon has been used as a semiconductor switch for over 50 years and the quest for higher switching frequencies, higher blocking voltages, lower losses, greater power densities and increased operating temperatures has led to the launch of Silicon Carbide (SiC) and other wide band gap materials used in power devices. Silicon Carbide Silicon Carbide is fast
08-01-2017 | Logistics & Transport
GD Rectifiers
SEMIKRON's MiniSKiiP - 20 Years of Innovation
SEMIKRON’s MiniSKiiP modules offer a unique design, setting a new standard in the power electronics industry. They are designed for 600V/650V, 1200V and 1700V with 4A-400A nominal chip currents. The modules are solder-free PCB assembly using spring contacts, easy PCB design and high reliability resulting in a cost benefit. Today, there are more than 35 million modules in the field, it was the first module available with pre-applied thermal interface material,
07-17-2017 | Logistics & Transport
GD Rectifiers
SEMIKRON MiniSKiiP Modules: The Benefits
SEMIKRON’s MiniSKiiP Modules are designed for 600V/650V, 1200V and 1700V with a power range that covers 4A – 400A, providing a possible inverter output power of 90kW. Benefits One of the major benefits of the MiniSKiiP Modules is the easy assembly and service friendly spring-contacts for the load and gate terminals. Compared to conventionally soldered modules, where an expensive soldering equipment and time consuming solder process is required, no special tools
Comments about openPR
OpenPR is clearly structured and remains true to its principle of confining itself to the essential parts. OpenPR has proven to be a very good and reliable partner to our media agency: Within the shortest time the releases are online and go down well with the media representatives. The success of OpenPR is reflected in the steadily increasing number of press releases. It is good that OpenPR exists!
Ursula Koslik, Director Marketing & PR, F+W Hamburg