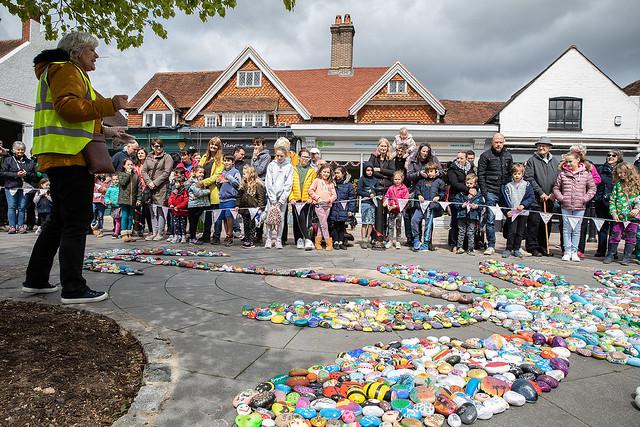 For immediate release: Monday 29th April 2019Volunteers from several groups in Cranleigh, Surrey joined forces on Saturday to set a new world record for the village.The record, for the title of “Largest display of painted pebbles/stones”, was set with 3,646 painted pebbles displayed in Fountain Square during the annual Spring into Cranleigh shopping event.Guinness World Records, who now need to verify the record attempt, established formal guidelines for the record, including that the artwork on each pebble was required to display a suitable degree of craftsmanship.A similar record was used to establish a benchmark for this record attempt, giving the volunteers a minimum target of 1,150 painted pebbles. This goal was exceeded by more than three times as enthusiastic pebble painters from Cranleigh and further afield came together to contribute their creations for the display.Cranleigh Chamber of Commerce president Rosemary French OBE, one of the event organisers, said:“We are over the moon at the success of this world record attempt, which places Cranleigh on the map. It was delightful to see young and old come together to create something extraordinary.“As a Chamber of Commerce, we continue to work hard to attract visitors to our High Street and inject greater vibrancy into the local community. Cranleigh has so much to offer those who live, work and visit here, as demonstrated by the fantastic work of Cranleigh in Bloom and their volunteers.”One local artist, 80-year-old Bea Cole, contributed more than 700 painted pebbles, decorated by her and her friends. This prolific pebble painter contributed stones to fill the centre-piece of the display, a large flower in celebration of Cranleigh in Bloom reaching the RHS Britain in Bloom finals this year.Bea has been part of the Cranleigh Rocks group since its inception last year, with her painted pebbles giving much pleasure to local children who find them after they are hidden. As a non-Facebook user, Bea enlists her husband Brian to provide updates and her son Adam (known in the group as the Rock Ninja) to hide the pebbles around the village.In preparation for the world record attempt, Bea has held group painted sessions, with her friends becoming part of the Cranleigh Rocks family.Other local groups including primary schools, Scouts and Guides, Jigsaw School, Care Ashore, Air Cadets, and even a team of scientists from UCL Mullard Space Science Laboratory, came together to decorate pebbles and donate them to the display.Pebbles were added to the display throughout the day, with the flower taking shape between 9 am and 2 pm when four independent witnesses officially judged the exhibition.Spring into Cranleigh was sponsored by local Christmas Tree grower Hans Christmas Anderson. Julie Alexandersen from Hans Christmas Andersen said:“It was great to smash our target for the world record attempt, and we look forward to receiving the official confirmation from Guinness World Records in due course. This day was very much a team effort, with volunteers from all parts of the community coming together to pull off something exceptional.”Cranleigh Chamber of Commerce has been representing the local business community since 1948 and draws its members from all sectors ranging from large companies to sole traders and retired individuals.We offer members the opportunity to grow their business through networking, promotion and inter-trading, as well as the chance to enhance and grow the local business environment as a whole.Through strong links with local government, we give members a voice on local issues affecting the local business community, helping to protect business and environmental interest in the Cranleigh area.Cranleigh Chamber of Commerce, 20 High Street, Cranleigh, Surrey, GU6 8AE www.cranleighbiz.co.uk 01483 274566

02-15-2017 | Energy & Environment
Utilitywise plc
Water market deregulation in England
The water market in England is deregulating, giving business the chance to tap into savings and other opportunities. Here’s how it will affect your organisation. Water deregulation in England – an aid to navigation In April 2017, water industry deregulation will start in England, giving businesses, charities and public sector organisations the ability to shop around and switch retail service provider. Until now, only non-domestic customers in Scotland and very high water
02-01-2012 | Industry, Real Estate & Constr …
Neschen AG
Neschen closes loss-making plant in England
Bückeburg, 31 January 2012 - The company Neschen AG based in Bückeburg is closing its UK production plant in Basildon in mid-2012. Around 30 employees work at this plant producing self-adhesive products mainly for intercompany deliveries to Neschen AG and its US subsidiary. The plant closure should lead to an improvement in the group's EBITDA of 1.3 million euros from 2013 onwards. The independent British sales company Neschen UK Ltd.
12-15-2011 | Industry, Real Estate & Constr …
What House?
House Prices Fall in England and Wales
According to latest figures issued from the Land Registry, property prices across England and Wales fell by 0.9% during the month of October 2011 with a total annual fall in value of 3.2%. The figures show that this overall monthly decrease in property values is the highest since February 2009 and that the average price of a home now stands at £159,999. Properties in the East of England including new homes
08-19-2011 | IT, New Media & Software
Rich IDSman
Riots in England - who is to blame?
The whole world watched in horror as the riots in the UK reached epic proportions. Images of burning cars, shops being smashed and looted and burning buildings flashed across TV sets throughout the world. It looked like a make believe horror movie except it was real. The vast majority of the vandals were teenagers and kids as young as 12 years old. They were robbing anything and everything they could.
12-22-2010 | Advertising, Media Consulting, …
Gullivers Sports Travel
Cabs to Drive England Fans Cricket Crazy
The International Cricket Council and Gullivers Sports Travel are gearing up cricket fans in England for the ICC Cricket World Cup 2011, which starts on 19 February. Gullivers, the official UK travel agent for the event, is urging fans to get behind the England team and support its mission to bring back the Cricket World Cup from the Asian sub-continent. To drive the point home, more than 150 ICC Cricket World
11-01-2010 | Business, Economy, Finances, B …
Propacea Limited
Bank of England Pessimistic On Home Values
In response to the savage cuts to public spending announced last week, the Bank of England has warned that property prices are unlikely to rise – and will probably fall – during 2011, as lending remains stubbornly low and household budgets are squeezed. In September, mortgage lending fell to a 10 year low, with none of the traditional post-summer ‘bounce’ that agents were hoping for. “In those parts of
Comments about openPR
We publish our press releases on openPR.de because we like people who are "open" - just like us.
Frank Obels, CEO, INCONET - Informationssysteme, Communication und Netzwerkberatung GmbH