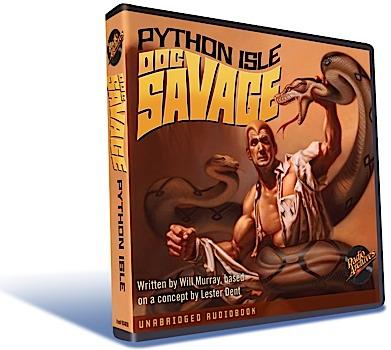 "Python Isle", a Doc Savage adventure by Will Murray, is the first audiobook release from RadioArchives.com

Radio Archives today announced a new series of audiobooks, based on favorite pulp novels of the 1930s and 1940s. The audiobooks will begin Radio Archives’ new line of original audio productions based on classic pulp fiction.The first series of audiobooks will be the seven Doc Savage novels penned by pulp author and Doc Savage authority Will Murray, featuring covers by artist Joe DeVito. Future series will include the exploits of pulp heroes The Spider and Secret Agent “X”, as well as other pulp fiction properties. The new audio productions will utilize the talents of some of the top voice actors and recording talents in the United States. The first audiobook release is scheduled for June 2011.“We’re thrilled to have Will Murray’s excellent Doc Savage novels as the lead-off offerings in this exciting new series,” said Harlan Zinck, president of Radio Archives. “The audiobooks and other new audio productions will nicely complement our classic radio and pulp reprint offerings.”Murray’s Doc Savage stories were published in the 1990’s and were the first new Doc Savage stories in more than 40 years. “Creating audiobooks of these extensions of the Doc Savage canon brings a new dimension to this classic pulp character,” Murray said.The new audiobook line, which will be created in digital stereo, will be produced and directed by audio producer Roger Rittner, who created the "Adventures of Doc Savage" full-cast radio series, now available in a deluxe CD set from Radio Archives. "I'm delighted to be able to bring the superb quality of Radio Archives productions to these exciting stories," said Rittner, who has a 30-year history of both recorded and live classic radio and audio productions. Radio Archives is a manufacturer and distributor of fully restored old time radio programs and pulp fiction reprints.For further information, as well to inquire about retail opportunities, contact Harlan Zinck at (800) 886-0551 or via e-mail at Service@RadioArchives.com.RadioArchives.com is one of the largest distributors of old time radio and pulp fiction entertainment in the United States. Specializing in fully restored radio programs, remastered from original recordings, we are known for our outstanding audio fidelity, impressive packaging, and commitment to top quality customer service.RadioArchives.com 1402 S Kahuna Drive Spokane Valley, Washington 99212