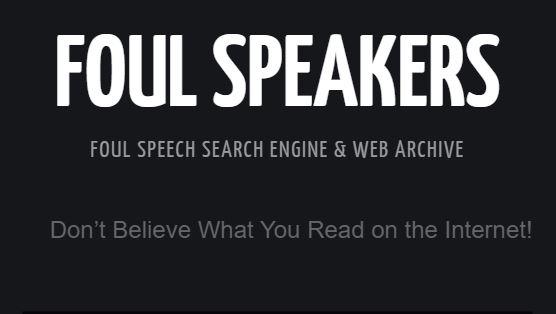 A niche search engine is aggregating the work of the internet’s foulest speakers and archiving it in a format that begs users to remain skeptical. FoulSpeakers.com uses modern scraping techniques to crawl some of the darkest corners of the internet. Websites infested with consumer complaints, cheater reports, catfish, police informants, cyber bullies, gossip, and other forms of negative information.Foul Speakers uses several scraping techniques ranging from primitive PHP cURL scripts to Google’s state of the art Puppeteer library for Node. The first version went live in November of 2019. That version used auto-blogging software to aggregate content from RSS feeds made available by source websites. Unfortunately, RSS has fallen out of favor with developers in recent years, so the next version used cURL to parse links from source code and copied source code from those links. Unfortunately, javascript has surged in popularity among developers in recent years and cURL cannot execute javascript. Fortunately, Google released Puppeteer which provides a high-level API for controlling headless Chrome. In layman’s speak that means that Puppeteer permits Foul Speakers to parse entire web pages including javascript using Google Chrome. This allows Foul Speakers to take full page screenshots of source material while copying main text elements.Many websites crawled by Foul Speakers have gone offline in recent months. The most common type of website to go down has been cheater reporting websites. Websites where vengeful former lovers go to expose those that cheated on them. Foul Speakers is not sure why so many cheater websites pop up and disappear so fast, but thanks to Foul Speakers the work of their users lives on with a sort of Wayback Machine for negative content.What about lies? Lies are one are one of the foulest forms of speech known to man. That is why Foul Speakers is the ideal context for aggregating works that should not be believed at face value. That is why Foul Speakers displays the phrase “Don’t Believe What You Read on the Internet!” in the top right-hand corner of every page. It has also developed an online test for users to take before deciding to believe what they read on the site. Foul Speakers hopes that doing such things will help discredit the internet as a source of information and help society learn to stop believing what they read online.Foul Speakers is quickly becoming the internet’s centralized source for up-to-date negative information about people and businesses. If you would like to know if you or anyone you know has been the target of a vengeful nemesis simply visit FoulSpeakers.com and type in a name.Learn MoreFoul Speakers: Foul Speech Search Engine and Web Archive https://foulspeakers.comCyrus Sullivan P.O. Box 86653 Portland, Oregon 97286Foul Speakers is the internet’s latest search engine and web archive with a twist. It only seeks out negative information and presents it in a context that begs users not to believe it.

10-25-2019 | Business, Economy, Finances, B …
QY Research, Inc
Smart Home Speakers Market Size
Los Angeles, United State, October 24, 2019,- This research study is one of the most detailed and accurate ones that solely focus on the global Smart Home Speakers market. It sheds light on critical factors that impact the growth of the global Smart Home Speakers market on several fronts. Market participants can use the report to gain a sound understanding of the competitive landscape and strategies adopted by leading players
10-04-2019 | IT, New Media & Software
MDxBlocks
MDxBlocks Attendees & Speakers at OilComm2019
MDxBlocks is proud to announce about its participation in the OilComm2019, hosted at Houston Mariott Westchase, Houston, TX on October 2-3,2019. Catch us at Booth #714 for networking and understanding our #Blockchain solutions in both upstream & downstream for Oil & Gas Industries. Here is the list of Speakers and Attendees for the conference from MDxBlocks: Dr. Claudio Lima : Dr. Claudio Lima MDxBlocks – Advisory Board Member, is going to provide insights
07-02-2018 | Tourism, Cars, Traffic
Car Audio Speakers Market Report 2018
Car Audio Speakers Market Report 2018: Segmentation by Product (2-Way Speakers, …
Global Car Audio Speakers market research report provides company profile for Harman, Clarion, Sony, Delphi, BOSE, Panasonic, Pioneer, Yanfeng Visteon, Alpine, Keenwood and Others. This market study includes data about consumer perspective, comprehensive analysis, statistics, market share, company performances (Stocks), historical analysis 2012 to 2017, market forecast 2018 to 2025 in terms of volume, revenue, YOY growth rate, and CAGR for the year 2018 to 2025, etc. The report also
03-24-2017 | Advertising, Media Consulting, …
MarketResearchReports.biz
Global Hybrid Wireless Speakers Market Professional Survey Report 2017: Single-s …
This report studies Hybrid Wireless Speakers in Global market, especially in North America, China, Europe, Southeast Asia, Japan and India, with production, revenue, consumption, import and export in these regions, from 2011 to 2015, and forecast to 2021. This report focuses on top manufacturers in global market, with production, price, revenue and market share for each manufacturer, covering Edifier JBL Logitech ViewSonic YAMAHA NEC Philips Terratec Pioneer BOSE By types, the market can be split into Single-speakers Double-speakers Multi-speakers By Application, the market can be split
02-29-2016 | Politics, Law & Society
Motivational Speakers Sydney
David Ferrier is the leading sales speakers and motivational speakers in Sydney
Australia 29.02.2016. David Ferrier is an experienced, thought-provoking and entertaining sales speaker with good command in motivating the cluster of people at a time. The motivational speaker must have all the skills which are required for motivation, energizing and enlightening the audience. Most of the business organizations would like to hire motivational speakers to host your event, conference or seminar. Motivational speaker can represent your business, brand or services in
06-24-2011 | Business, Economy, Finances, B …
Speakers Corner
Speakers Corner Proudly Presents Innovation Speakers
In a world where innovation is the central point upon which companies can seize new growth opportunities, create new markets and even transform industries, corporate events are the central stage for on which to grandstand innovation. Speakers Corner holds a catalogue of personalities who can imbue a passion and knowledge for the subject, including Zunaira Munir, Nick Jankel, Jane Young, Noreena Hertz and Steven Attenborough. Innovation is not just about coming
Comments about openPR
OpenPR is clearly structured and remains true to its principle of confining itself to the essential parts. OpenPR has proven to be a very good and reliable partner to our media agency: Within the shortest time the releases are online and go down well with the media representatives. The success of OpenPR is reflected in the steadily increasing number of press releases. It is good that OpenPR exists!
Ursula Koslik, Director Marketing & PR, F+W Hamburg