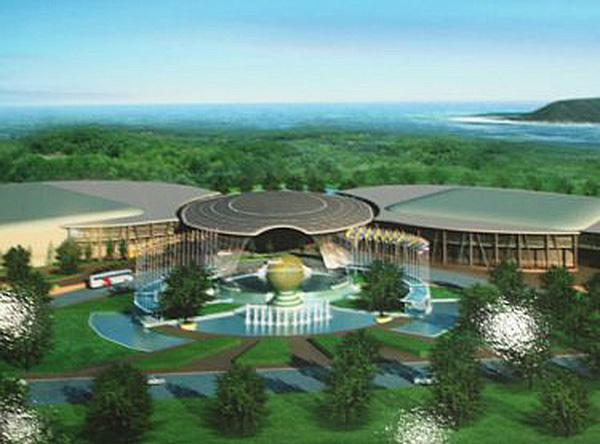 The winning design for the Phuket Exhibition and Convention Centre

At a ceremony in Phuket Town on Saturday 26th March 2011, Phuket Governor Tri Augkaradacha announced the winning design for the 2.6 billion baht (US$86 million) Phuket Exhibition and Convention Centre in Mai Khao.

Shortlisted from three finalists, the concept by KAED 103 is in the shape of a turtle shell. However, the plans will be modified to incorporate some Sino-Portuguese architecture, a feature which some locals said was important to them.

When asked why they chose KAED103, Governor Tri remarked; "It was the one that matched the demands of Phuket people."

Muang Thong Thani Convention Centre is home to the famous Impact Arena; a 12,000 seat concert hall which has hosted shows by stars such as Michael Jackson, Kylie Minogue and The Rolling Stones.

However, it seems that the fate of the Phuket Exhibition and Convention Centre may rest in the hands of Thailand’s ruling Democrat Party.

Should the Democrat Party lose the Thai general elections in June this year, it remains unclear whether the Exhibition and Convention Centre would be built.

“I don’t know the other parties’ policies, but next term if we are still in the Government, I guarantee the project will continue. I expect the centre to be finished by the start of 2014,” said Thai Finance Minister, Korn Chatikavanij.

You can read the full story here... http://blog.phuketoceanvillas.com/phuket-exhibition-and-convention-centre-guaranteed-to-be-built/

Planning will now move to the construction phase which is due to start in September although a construction company is yet to be decided upon.

Rebecca Smith is a real estate journalist with more than 15 years experience. She is currently the sales director for Phuket Ocean Villas (http://www.phuketoceanvillas.com) who specialise in luxury ocean view property investments in Phuket, Thailand.

03-09-2018 | Business, Economy, Finances, B …
Etech Global Services
Etech Exhibiting at PACE Convention & Expo
Etech Global Services is proud to announce their participation at the PACE Conference in Atlanta, Georgia between April 15-18, 2018. Each customer interaction has meaningful details and, when analyzed, helps provide you with insights that are important for your business’ decision making. With this opportunity, Etech can share their knowledge with various businesses on the industry’s best practices and the technologies that help make customer engagement more measurable and efficient.
08-26-2013 | Fashion, Lifestyle, Trends
Saint City Event GmbH
7. Tattoo Convention Offenbach Rhein / Main (Germany)
Color under the skin – 7th Tattoo Convention in Offenbach THE event in the Rhine/Main area in terms of body art & lifestyle On the weekend of 7 to 8 December 2013 Offenbach invites to the 7th Tattoo Convention. At the Fairgrounds of Messe Offenbach visitors can expect about 100 national and international tattoo artists and dealers in an extraordinary atmosphere. After the successful events in previous years, the Tattoo Convention Offenbach attracts
03-05-2012 | IT, New Media & Software
Impowersoft
Impowersoft debuts Aspire at the IIABA Convention
The Independent Insurance Agents & Brokers of America (IIABA) also known as “The Big I”, is a national alliance of 300,000 agency employees and experienced bipartisan government affairs staff in the nation’s capital. impowersoft will debut ASPIRE, a revolutionary agency management system, at the Annual IIABA Convention held in Washington D.C. from April 29th to May 1st. Although an official commercial release date is still to
01-26-2012 | Leisure, Entertainment, Miscel …
Anime Punch, L.L.C
ANIME PUNCH ANNOUNCES ITS NEWEST COLUMBUS CONVENTION
Sci-fi and comic book conventions have traditionally focused the bulk of their content on promoting their own industries and selling as much product as possible instead of entertaining their attendees. Revoluticon will take a different approach that will focus heavily on entertaining instead of selling and feature extensive live programming including a variety hour, several game show spin-offs, quiz shows, a play put on by the staff, improv comedy, and
10-07-2011 | Tourism, Cars, Traffic
Newlink Communications
PANAMA TOP MEETINGS & CONVENTION DESTINATION
Panama City, Panama, October 5th, 2011.- Panama has become one of the top destinations in Latin-America to host major international events. Just now, Panama is welcoming thousands of foreign visitors from around the world to attend the World Baseball Classic, as well as the UN Preparatory Meeting for the Climate Summit COP 17. The World Baseball Classic 2011, a major international baseball event organized by the International Baseball Federation (IBAF),
12-05-2007 | Tourism, Cars, Traffic
SCANDI INTERNATIONAL Destination Management Germany
SCANDI INTERNATIONAL join GCB German Convention Bureau
SCANDI INTERNATIONAL Destination Management Germany join GCB, which is the marketing organisation for Germany as a conference location. SI DMC provides over 700 companies in 55 countries with first class destination management services. SI DMC clients are leading international travel agencies, airlines, tour operators and Germany specialists. SCANDI INTERNATIONAL launch new meeting and conference Germany product under the label SI Meetings | Conferences \"First class destination service all over Germany\".
Comments about openPR
OpenPR is clearly structured and remains true to its principle of confining itself to the essential parts. OpenPR has proven to be a very good and reliable partner to our media agency: Within the shortest time the releases are online and go down well with the media representatives. The success of OpenPR is reflected in the steadily increasing number of press releases. It is good that OpenPR exists!
Ursula Koslik, Director Marketing & PR, F+W Hamburg