BS/2 Awarded for Achievements in Uzbekistan 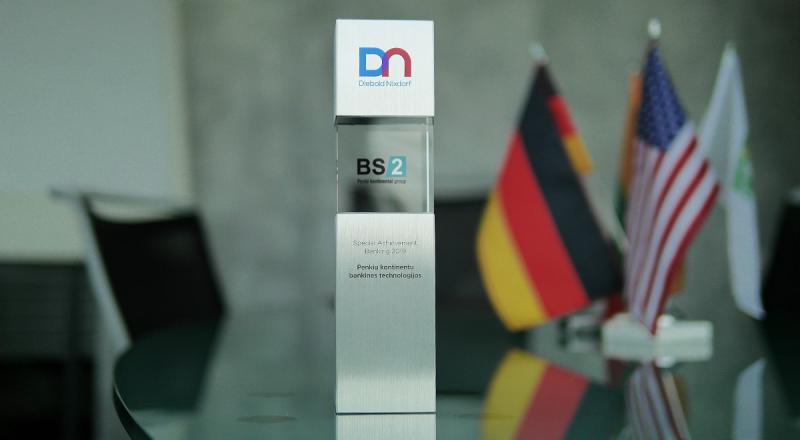 The banking technologies company Penkių kontinentų bankinės technologijos (BS/2) of Penki Kontinentai Group received an exceptional award from the world leader of the banking and trade equipment Diebold Nixdorf for successful business development in Uzbekistan.The Special Achievement Banking 2019 award was presented to BS/2 at the Banking Eurasia Partner Summit, held in Rome (Italy) on April 8-10. Over 120 delegates from 30 countries participated in the annual event, shared strategic plans for the future with their colleagues and discussed last year results.“We are pleased that the results BS/2 achieved in one of the major countries of Central Asia were recognized by our reliable partner Diebold Nixdorf. Currently, the financial sector of Uzbekistan is experiencing some major reforms. Banks are actively introducing innovations, increasing the number of ATMs and expanding the range of services. It is gratifying that our company can contribute to the development of banking in Uzbekistan by offering financial organizations advanced solutions for self-service devices,” says Anton Valinčius, director of BS/2 Uzbekistan.Last year the company executed several large projects, providing the country's largest banks with over 300 Diebold Nixdorf self-service devices with cash recycling functionality. The devices also included the proactive security solution ATMeye.iQ and currency exchange system FCX.iQ integration.The company BS/2 Uzbekistan was established more than 10 years ago. It contributes to the development of the local banking technology market. Today, the range of provided services includes the sale of specialized equipment and software, system maintenance, IT infrastructure monitoring, consulting, as well as other services catered to unique client needs.According to Anton Valinčius, Uzbekistan is becoming one of the most attractive countries for foreign investors. In Central Asia, it ranks first in terms of population (over 32 million inhabitants) and second, (after Kazakhstan) in economic development. Last year Uzbekistan embarked on the development of digital banks at the state level and improved the regulatory framework in the field of e-commerce. In January 2018, the term “digital banking” appeared in the legislation, and revealed the need to develop the full range of modern technologies that allow interaction between banks, their customers and government through electronic communication channels.BS/2 is the part of the Penki Kontinentai Group. The company, which has been operating for over two decades, represents the world's largest manufacturer of banking and trading equipment Diebold Nixdorf in 13 countries. In eight of them, BS/2 provides outsourced IT services. BS/2 service coverage is 25,000 units of equipment (ATMs, automated teller safes and information kiosks, etc.) In addition, BS/2 develops its own software solutions for security, cash flow management and optimization of business processes, which are highly appreciated by the experts and used in 80 countries of the world. BS/2 clients include the biggest banks in the Baltics, Central Asia, Transcaucasia, Eastern Europe and other regions.Germanas Kavalskis Chief Communications OfficerPenki Kontinentai Group Kareivių str. 2, LT-08248, Vilnius, Lithuania+370 626 27488 germanas.kavalskis@5ci.lt www.5ci.lt

02-27-2020 | Business, Economy, Finances, B …
Penki Kontinentai Group
Penki Kontinentai Turnover Exceeded 70 Million Euros In 2019
The turnover of the Penki Kontinentai Group operating in the field of banking technologies, payment solutions, retail, fiber optic Internet and IT services has grown by more than 50 percent compared to 2018 and exceeded 70 million euros in 2019. "The successful start of the year gave a powerful impetus to our future work. Financial indicators reflect the high level of team professionalism and consistent compliance with the development strategy in
01-08-2020 | Business, Economy, Finances, B …
Penki Kontinentai Group
The Largest Lithuanian Postal Service Provider Continues Cooperation with ASHBUR …
Lietuvos paštas, the largest Lithuanian postal service provider, extended the cooperation agreement with ASHBURN International, which develops and implements software solutions for authorization of payment cards and network management of EFTPOS terminals, for another two years. By the agreement, ASHBURN International will continue to ensure the operation of all Lietuvos paštas payment terminals, which are connected to the TransLink.iQ system, which allows real-time monitoring, parametrization and software update of all devices.
11-20-2019 | IT, New Media & Software
Penki Kontinentai Group
ASHBURN International in TOP 10 Payment and Card Solution Providers in Europe 20 …
The well-known international magazine Banking CIO Outlook included ASHBURN International, which develops and implements transaction routing and EFTPOS terminals network management software, in the TOP 10 Payment and Card Solution Providers. Banking CIO Outlook Magazine, which is published in Silicon Valley, highlights the latest technological trends in the banking sector. Industry experts share their experience and assess the latest global trends in payments and security. Each year, a reputable group of
09-17-2019 | Business, Economy, Finances, B …
Penki Kontinentai Group
What is Face Detection and how can banks use it to protect ATMs
Major developer of software solutions for banks and retail BS/2 company presents a biometric technology-based feature of Face Detection for ATMs at “RBR: ATM & Cyber Security 2019” - the world’s leading conference focused on physical and logical ATM security. The event will be held in London in October 2019 and attract 400+ banks and security experts from over 40 countries worldwide to discuss current problems of ATM security

04-19-2021 | Industry, Real Estate & Constr …
Piranha
BS Fixings Launches exciting new website.
BS Fixings is proud to announce the launch of their brand-new e-commerce website, https://bsfixings.uk/ . After a period of consultation with customers, internal departments and specialist conversion rate optimisation professionals, the site went live in the first quarter of 2021 with a whole host of features designed to make sourcing and purchasing fixings https://bsfixings.uk/fixings/, fasteners, and other stainless-steel products for the trade and construction markets as easy as possible.
04-24-2019 | Business, Economy, Finances, B …
Penki Kontinentai Group
BS/2 Provides Cash Monitoring tools for VTB Bank in Georgia to Improve Cash Effi …
VTB Bank is one of the leading banks in the Georgian financial market. With almost 15 years in business, it established itself as a modern financial institution, introducing innovations and improving the quality of services. Since the beginning of 2019, technical support for all bank self-service devices has been entrusted to BS/2 Georgia. Cash flow is monitored by the Cash Management.iQ software solution developed by Penkių kontinentų bankinės technologijos (BS/2)
02-15-2019 | IT, New Media & Software
Penki Kontinentai Group
Unique Face Recognition Solution Will be Displayed by BS/2 at The Largest ATM-Fo …
More than 1200 well-known banking technology brands from 25 different countries will participate in the ATMIA Conference and Exhibition in Orlando (Florida, USA), which will be held on February 19-21. One of the most important events of this year has a global perspective and gives a great opportunity to share experience and knowledge for industry representatives. Among the participants is the banking technology company BS/2, which will display the own
10-02-2018 | Business, Economy, Finances, B …
Penki Kontinentai Group
BS/2 is among TOP15 Technology Leaders
International banking technology company BS/2, specializing in IT outsourcing, software development and equipment supply, is listed in TOP15 Technology Leaders according to the VERSLO ŽINIOS ranking of Sector Leaders 2018. The biggest business portal in Lithuania VERSLO ŽINIOS evaluates companies and creates the rating of leaders in several different sectors each year. This list is based on the company's profit data and business value nationally. “The new technologies revolutionized our life. BS/2
07-25-2018 | Business, Economy, Finances, B …
Penki Kontinentai Group
The Cryptomate Network Maintenance Is Entrusted To BS/2
BS/2, a company specializing in banking solutions, and a crypto ATM manufacturer Cryptomat signed a service agreement on the cryptomate network maintenance. By the end of the year, it is planned to install in Georgian cities about 20 ATMs with function of buying bitcoins and litecoins. According to the World Bank, Georgia is the world's third largest miner of cryptocurrencies. The surveys or show that up to 5% of households in
06-21-2018 | Business, Economy, Finances, B …
Penki Kontinentai Group
BS/2 maintains 13,000 POS-terminals in Georgia
The company BS/2 operates more than 20,000 POS terminals in 7,000 outlets in the Baltic States, Central Asia and Caucasus. BS/2 provides more than 20,000 POS terminals to 7,000 outlets. It is planned to increase the POS terminals network to 25,000 by the end of 2018. As the result of the recently implemented project, BS/2 Georgia began maintaining 12,000 POS terminals of one of the largest Georgian commercial banks. “According
Comments about openPR
We publish our press releases on openPR.de because we like people who are "open" - just like us.
Frank Obels, CEO, INCONET - Informationssysteme, Communication und Netzwerkberatung GmbH