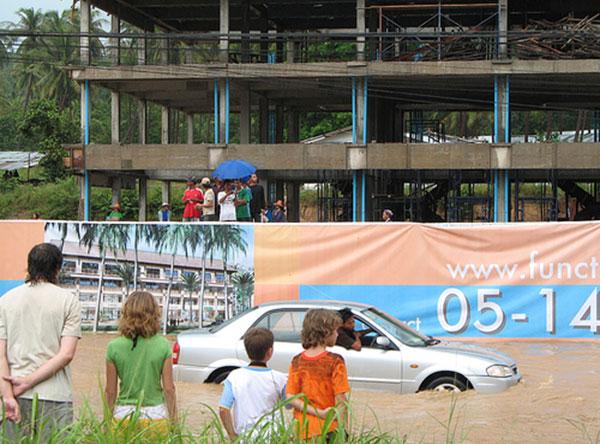 Koh Samui, Thailand: Thousands of tourists have been left stranded as high winds and rain pound Koh Samui, causing widespread flooding, power outages and severing the Island’s transport links.“This flooding is the worst we have seen in a decade. Flash floods have come rushing down from Samui’s hills, with two days of continual, pouring rain. The most important thing for us now is to evacuate people to safety,” said Koh Samui mayor, Chaikwang Ramnet.Locals and expats have been using sandbags to prevent the rising flood waters from entering their homes and businesses after Samui took another battering last night.Thai Authorities have started evacuating people to temples on higher ground as the flood waters continue to rise. Soldiers have been deployed to rescue people from the densely populated tourist areas of Chaweng, Maenam and Lamai.Tourists are being advised to stay in their hotels until flights resume, as the only way to get on or off the Island at present is to hitch a lift with the Thai Navy.Koh Samui’s tourist industry is likely to be hit hard as March and April form part of the tourist high season.Flash floods have affected six southern provinces of Thailand over the past few days, causing land, sea, rail and air travel to be disrupted. The floods have caused devastating damage to farm land and property in many areas.So far, the media have reported twelve deaths attributed to the floods, with over 700,000 people being affected throughout Thailand.Phuket has also suffered from heavy rainfall and strong winds in recent days but disruption has been minimal with Phuket International Airport and other transport services reporting business as usual.This isn’t the first time Koh Samui has been brought to a standstill by storms; on 2nd November 2010 the Island experienced flash floods which also left tourists stranded when the airport suspended all flights. Businesses experienced power outages and a number of hotels in oceanfront locations were forced to evacuate guests to higher ground.Article source: http://blog.phuketoceanvillas.com/koh-samui-thailand-cut-off-as-storms-rage/Rebecca Smith Phuket Ocean Villas - http://www.phuketoceanvillas.comRebecca Smith is a real estate journalist with more than 15 years experience. She is currently the sales director for Phuket Ocean Villas (http://www.phuketoceanvillas.com) who specialise in luxury ocean view property in Phuket, Thailand.149/12 Srisoonthorn Road, Cherngtalay, Thalang, 83110, Phuket, Thailand

You can edit or delete your press release Koh Samui, Thailand cut-off as storms rage here

10-29-2018 | Advertising, Media Consulting, …
TAT Newsroom
Samui goes green to protect island ecosystem
TAT joins residents and tourists on Ko Samui in the fight against single-use plastics to reduce waste. Bangkok, 29 October, 2018 - The Tourism Authority of Thailand (TAT) is working together with local stakeholders and tourists on Ko Samui to eliminate the use of single-use plastics and encourage all to reduce waste, reuse and recycle to help protect the island’s ecosystem. Local Thai authorities on Ko Samui are proactively campaigning for recycling
10-20-2017 | Tourism, Cars, Traffic
ONYX Hospitality Group
72 Hours with OZO Chaweng Samui
What’s good to see, eat and do on the Island of Coconuts Bangkok, Thailand. – Located off the eastern coast in the Gulf of Thailand, Koh Samui is an island filled with dazzling palm-fringed beaches with plenty to do and see. The vocal local team at OZO Chaweng Samui believe that 72 hours is just right to cover the best attractions, enjoy delicious cuisine and go on an adventure. See Koh Samui’s
01-11-2011 | Tourism, Cars, Traffic
Samui Beach Village Rentals Co Ltd
Samui Beach Village Announces Free Nights in March
Koh Samui, Thailand, January 11th, 2011: Stay for 7 and Pay only for 5 Nights... Plus receive a complimentary massage for each guest + a free private chef service if choosing a villa stay Looking for a place to get away and escape the daily grind and long days? Samui Beach Village has exactly what you need - 5 star luxury comfort and services, a stunning beach at your doorstep
12-18-2010 | Tourism, Cars, Traffic
Samui Beach Village Rentals Co Ltd
Samui Beach Village LAST MINUTE SPECIALS
Koh Samui, Thailand, December 16th, 2010: If you’re looking to book a holiday at the last minute this Christmas, Samui Beach Village has some unbelievable offers to make sure you and your wallet have a wonderful escape! Book before the 26th December 2010 and stay before the 31st December to receive some very special rates! We are offering some VERY SPECIAL RATES on our last few remaining Luxury Koh Samui Villas and
12-18-2010 | Tourism, Cars, Traffic
Samui Beach Village Rentals Co Ltd
Samui Beach Village TASTE OF THAILAND PACKAGES – PLUS 25% OFF!
Koh Samui, Thailand, December 16th, 2010: Are you looking to not only get away to a Tropical Paradise but also have an insight into Thai Food and how to prepare it and cook it for yourself? Then why not take advantage of this superb offer with not only a 25% REDUCTION on selected Luxury Koh Samui Villas PLUS something a little EXTRA….. TASTE OF THAILAND EXPERIENCE includes; • A Private Chef Service for lunch
11-23-2010 | Tourism, Cars, Traffic
Samui Beach Village Ltd
Samui Beach Village – Free Return Flights From Bangkok To Samui Or Phuket To S …
Koh Samui, Thailand, 20th November10 - Stay with us in one of our Luxury Samui Villas or Ocean Rooms during May through November 2011 and we will happily pay for your return flights from Bangkok-Samui, or from Phuket -Samui! Not only will we pay for your flights, but if you book before 1st January 2011, we will reward you with a MASSIVE 15% early bird discount when you book
Comments about openPR
I can't but agree to the positive statements about your portal: easy to use, clear layout, very good search function, and quick editing!
Jens O'Brien, Borgmeier Media Communication