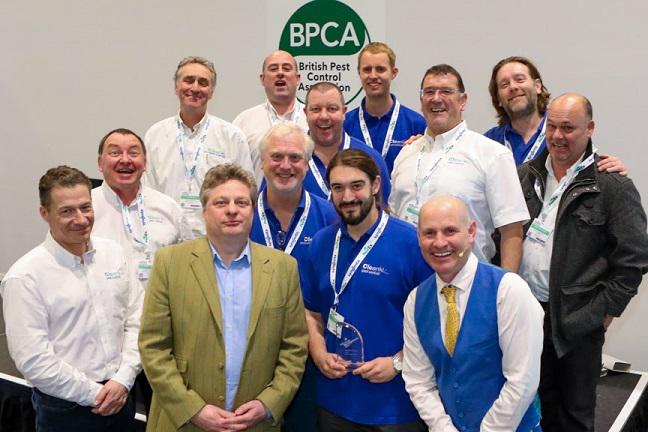 Croydon-based Cleankill Pest Control has cause to celebrate after being named ‘Company of the Year’ at the 2019 British Pest Management Awards (BPMAs). At the same event, Cleankill’s Managing Director, Paul Bates, was Highly Commended in the ‘Unsung Hero’ category.Organised by the British Pest Control Association (BPCA), the BPMAs celebrate individuals and companies that demonstrate exemplary performance and help portray the pest management industry in a positive light. Modern pest control is no longer the flat-cap and whippet brigade, it is a highly-developed industry that has significant impacts on public health, food safety, environmental sustainability and economic development.Commenting on being named ‘Company of the Year’, Paul said: "We are absolutely thrilled to win. We were up against some amazing high-profile companies, like Rokill and Safeguard. These businesses have been in operation for a long time, so for us to be shortlisted alongside them was s a real achievement. To then be named ‘Company of the Year’ is wonderful. “It is not just an endorsement by our peers, it is also a clear demonstration that our approach to business is the right one. Everything we do as a business: our customer service, staff development and training, and the way we support community projects and the environment, are all part of a business ethic that sees pest control, not as a relic from the past, but as a profession vital to modern life.”Referring to being Highly Commended in the ‘Unsung Hero’ category he added: "I was surprised, delighted and honoured to receive this award. For me, it's recognition of the huge effort the whole Cleankill team has invested in making people outside the sector realise that we are a highly professional industry. Since Cleankill began in 1995, it has been one of our main aims – to get pest control recognised as a profession and not a trade. It seems that message is finally getting through."Phil Halpin, BPCA President, said: “Congratulations to all my colleagues who picked up an award at the BPMA ceremony. The judging panel assures me that the quality of candidates was very high, so display your awards proudly.“Taking the time to celebrate each other’s achievements helps show the world the important role we all play in protecting public health and safety”.The awards were presented at PestEx 2019, held at ExCel London on 20th and 21st March. The presentation took place on the first evening, with ceremonial duties being performed by ‘One Show’ regular and ecologist, Mike Dilger.The next evening, Cleankill were present at the Gatwick Diamond Business Awards, where they had been shortlisted in two categories – ‘Employer of the Year’ and ‘Business Person of the Year’ for Paul. After success in 2018, when they were named ‘Responsible Business of the Year’, this year they had to contend with just being finalists in both categories. After the event, Paul commented: “With over 45,000 businesses in the Gatwick Diamond region, and after considerable success in previous years, it is a real honour to even be named a finalist at these awards. Sometimes it’s your turn to be the bridesmaid, but to even be shortlisted is a real achievement and a testament to great work being done by Cleankill’s staff.”EndPress enquiries please contact Suzi Christie on 075591140 or e-mail suzi@blueberry-pr.co.ukCleankill is a member of the British Pest Control Association and has a wide range of accreditations, including SafeContractor, CHAS Premium Plus, PICS, CEPA, ISO 9001 and ISO 14001. In 2018 they were accredited to the gold standard by Investors in People, the only English pest control company to achieve this accolade. (www.cleankill.co.uk)The company has recently expanded into new regions with the acquisition of Good Riddance Pest Control in Bristol, Pest Control Bucks, and Bird Control Sussex. These businesses now operate as subsidiaries of Cleankill (Environmental Services) Ltd.2, Danecroft PLace Hellingly Hailsham BN27 4ES

12-05-2018 | Business, Economy, Finances, B …
Cleankill Pest Control
Cleankill expands with acquisition of Good Riddance
Croydon-based Cleankill completed the purchase of Good Riddance Pest Control on 30th November 2018. Founded in 2002 by Howard Taffs, Good Riddance Pest Control provides commercial and domestic pest control services in and around Bristol, Bath and Weston-Super-Mare. Mr Taffs approached Cleankill when he decided to retire. Commenting on the decision, he said: “Within the industry, Cleankill is well-known as a company that looks after its staff and its customers. Like Good Riddance
07-13-2017 | Business, Economy, Finances, B …
Cleankill Pest Control
Pest control company scoops first national award
Staff at Surrey based Cleankill Pest Control are celebrating after the company won its first national award. Cleankill clinched the Service Provider of the Year category of ARMA’s (Association of Residential Managing Agents) inaugural ACE Awards. The awards ceremony, which was held at Tobacco Dock in London’s east end, was attended by 450 industry professionals. The awards were introduced to celebrate excellence and exceptional achievement by the UK's leading residential