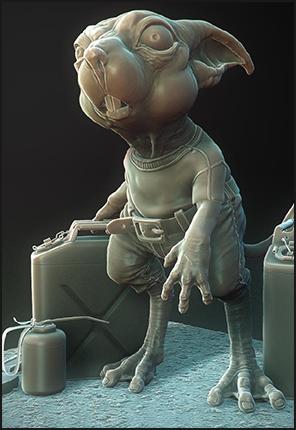 The Third Guild is pleased to announce the immediate availability of a new character creation tutorial series for ZBrush, by Martin K. Krol. “Characters Made Easy: Part 1” is a high quality 12 hour tutorial series, in HD, that provides a guide to the process of character creation in ZBrush from the ground up. These tutorials are aimed at artists who are new or fairly new to Zbrush and follow Martin as he works through the process of creating the geometry for a character model, in real time, providing expert tips about the tools and techniques that he uses along the way. Martin K. Krol, said “I have been working with ZBrush since close to it's inception. Over the years and as the package evolved I have stayed in close contact with the developers and have learned a lot about Zbrush.” and “Through watching these videos I hope that artists will learn ZBrush's extensive tool set in a much shorter period of time than it took me.” About Martin K. Krol Martin is a Canadian based digital artist who has worked in the Film, Games and Commercial Industries. His work includes a stint as the lead modeller at Technicolor | VFX and his film credits include 300, Underworld: Rise of the Lycans and The Fountain. The Third Guild is an online store that provides high quality digital content created by a growing collective of talented artists. It was founded by Neil Hayes in 2010. Dr Neil Hayes is the founder and director of The Third Guild. The Third Guild Limited is a UK registered company. The Third Guild Limited 136-140 Old Shoreham Road, Brighton, BN3 7BD. United Kingdom. Press Contact: Neil Hayes email: press@thethirdguild.com Product Page: http://www.thethirdguild.com/products/zbrush-tutorials-characters-made-easy-part1/ Company website: http://www.thethirdguild.com/ Media Resources: http://www.thethirdguild.com/pages/press-and-media/

07-13-2017 | IT, New Media & Software
Aspose
Robust OCR Engine Implementation & Enhanced Characters Splitting Mechanism using …
What’s new in this release? We are proud to announce the new release of Aspose.OCR for .NET 17.6.0. The major development in this release is the improvements made to make processing of OCR operation more fast and robust. Implementation of the OCR engine has been upgraded in such way that neural network calls have been reduced. More OCR process classifier has been introduced and characters splitting mechanism is also improved
06-27-2011 | Industry, Real Estate & Constr …
GOEPEL electronics Ltd.
easyOCR™ Function enables Reading of Asian Characters
GOEPEL electronic has developed easyOCR™, an easy-to-use software for automatic reading of texts on displays of engine control units (ECUs). A new easyOCR™ function now enables reading Asian characters of any font sizes without pre-learning. The software function’s benefits were additionally combined with an intelligent image pre-processing. Within a multi-stage process text areas are separated from backgrounds. Highlighted and inverted, text passages are pre-processed to enable the automatic reading. Furthermore,
04-20-2011 | Tourism, Cars, Traffic
Hannover Adventure Zoo
Prickly characters and lucky bags at Hannover Adventure Zoo
Barbary lion offspring and a dark secret on the banks of the Zambezi. Majestic eagles and clever coati in the Show Arena. Mini elephants taking part in mother-baby exercises in the Jungle Palace, a bag of surprises in the Outback: Hannover Adventure Zoo presents animal attractions in seven unique zoo worlds for the new season. Barbary lion offspring: royal prickly characters Prickly and stubborn, the royal offspring of the Barbary lion have
01-06-2011 | IT, New Media & Software
Kernel Data Recovery
Now get full support to Unicode characters while performing BKF file repair
BKF file that facilitates computer users to backup important files and folders will no more be a reason of data loss because of its corruption. Kernel for BKF recovery now facilitates computer users to repair the corrupt BFK file with complete accuracy and recover the data encompassed in it. The motto behind developing the Kernel for BKF recovery tool is to let the computer users create BKF file without the
11-29-2010 | Fashion, Lifestyle, Trends
googlin
Chat rooms for free: customize your own avatar with animated avatars and cartoon …
Googlin.com is website provides teenchat, chat rooms for free and free online chatting services. Googlin offers chat rooms services as a solution to make people meet on the web-pages with small avatars provided by the desktop application. Here you can customize your own avatar with animated avatars, cartoon characters and avatar makers. Get your favorite chat rooms according to your need and make lots of online friends. Googlin is the only
01-28-2010 | IT, New Media & Software
DomsNetwork, Inc
YouMe - control real world characters
Today it was announced by DomsNetwork, Inc that a public beta release of YouMe will be available mid 2010. YouMe has been in development since September 2008, and has had a private alpha run successfully from late 2009. YouMe allows subscribers to control real world people, by sending real time requests delivered to that users mobile phone for them to carry out or deny; these users are known as ‘you’s.
Comments about openPR
I can't but agree to the positive statements about your portal: easy to use, clear layout, very good search function, and quick editing!
Jens O'Brien, Borgmeier Media Communication