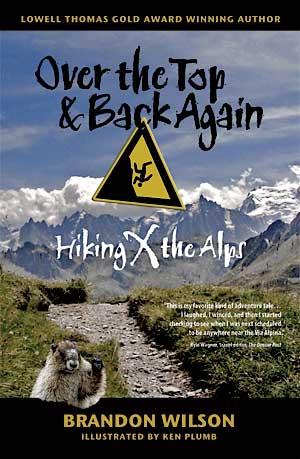 Over the Top & Back Again, a Book of the Year Award Finalist by Brandon Wilson

Over the Top & Back Again: Hiking X the Alps, the latest travel adventure book by Brandon Wilson, has been named a finalist in the 2010 BOOK OF THE YEAR AWARDS by ForeWord Reviews. It was selected from 1400 entries in 56 genres, representing more than 350 publishers.Over the Top & Back Again chronicles Wilson’s 1200-mile (1900-km.) hike with his wife for 111 days on the recently formed Via Alpina. This ultimate adventure led across Italy, Slovenia, Austria, Germany, Liechtenstein, Switzerland, and France to Monaco. Besides offering immersion into Alpine life and wilderness, it meant climbing 3000 feet (1000 meters) from valley to mountain hut each day—the equivalent of 12 Mt. Everests—in extreme conditions, including Föhn winds, hail, ice, snow, and more than 40 days of rain.However, it was more than pain and peril as the couple hiked in the shadows of Mt. Blanc, the Eiger, and the Dolomite Range. Little compares to the beauty, serenity, wildlife, legends, culture, and cuisine they found along the way. Plus hiking is a unique way to witness the endangered Alpine ecosystem.In a recent review of Over the Top & Back Again, ForeWord Reviews wrote, “Wilson's casual writing style showcases his humor and pulls readers into his tales of dangerous treks, eccentric characters, and uncooperative weather. For outdoor enthusiasts, this book will awaken the travel bug within and inspire adventure. For others, it's a worthwhile armchair journey through beautiful country with friendly guides.” A common theme in Wilson’s books is that an ordinary person can overcome seemingly insurmountable challenges—“Never say “Impossible!” His past adventures have led readers step-by-step across the wilds of occupied-Tibet, then from London to Cape Town on an edge-of-your-seat African safari, and finally on a peace walk while blazing the path of the first Knights Templar from France to Jerusalem. Over the Top & Back Again is the first Via Alpina (Trieste to Monaco) travel narrative published in English, with 53 author photos, maps and custom illustrations by Ken Plumb. It provides a humorous first-hand account for those who dream of making a similar journey themselves—on foot or maybe just in their mind. It is the fourth in a series of true travel adventure books by Brandon Wilson and published by Pilgrim’s Tales (Hawaii). Along the Templar Trail: Seven Million Steps for Peace received the Lowell Thomas Gold Award for 2009 Best Travel Book (Society of American Travel Writers). Others include: Dead Men Don’t Leave Tips: Adventures X Africa and Yak Butter Blues, which won the Independent Publisher IPPY Award.Since 1998, ForeWord Reviews has been one of the publishing industry’s most respected magazine and online review service for readers, booksellers, book buyers, publishing insiders, and librarians. Published six times a year, each issue reaches 26,000 librarians and booksellers. The Book of the Year Awards program was created to spotlight distinctive books from independent publishers. They explained, “These books are examples of independent publishing at its finest.” A panel of librarians and booksellers will determine the final Gold, Silver and Bronze award winners to be announced at the ALA Annual Conference in New Orleans in June. Over the Top & Back Again is available from your favorite bookseller. For more information, a video and a preview, visit pilgrimstales(dot)com.Pilgrim's Tales publishes books of adventure, discovery and enlightenment.Pilgrim's Tales, Inc. P.O. Box 854 Volcano, HI 96785 contact: Publicity Dept.

11-30-2011 | Leisure, Entertainment, Miscel …
Pilgrim's Tales, Inc.
Brandon Wilson’s Award-Winning “Along the Templar Trail" Published in German …
Brandon Wilson’s inspiring book, "Along the Templar Trail," has been published in a new German edition, "Auf dem Templerweg: Sieben Millionen Schritte für den Frieden." The English edition won the 2009 Lowell Thomas Gold Award for BEST TRAVEL BOOK. Paia, HI, November 29, 2011 - In this time of political grandstanding, it is refreshing to hear about someone who quite literally, “walks the talk.” Recently, author/photographer Brandon Wilson and his 68-year-old
06-28-2011 | Leisure, Entertainment, Miscel …
Pilgrim's Tales, Inc.
Brandon Wilson’s Award-Winning Adventure Tales Go Digital
Pilgrim’s Tales, publisher, is proud to announce that Brandon Wilson’s award-winning series of four travel adventure books is now also available from Amazon.com for Kindle. Brandon Wilson, a Lowell Thomas Gold Award-winner and Explorer Club member, is most recently author of “Over the Top & Back Again: Hiking X the Alps” (ISBN 9780977053636/ 9780977053629), which received the 2010 Book of the Year Bronze Award (travel essay category) from ForeWord Reviews. It
06-28-2011 | Arts & Culture
Pilgrim's Tales, Inc.
“Over the Top & Back Again” by Brandon Wilson Receives 2010 Book of the Year …
"Over the Top & Back Again: Hiking X the Alps," the latest travel adventure book by Brandon Wilson, has been named 2010 Book of the Year Bronze Award winner (travel essay division) by ForeWord Reviews. The announcement was made on June 25, 2011 at the American Library Association Annual Conference in New Orleans. Wilson’s book was selected by librarians and reviewers from 1400 entries in 56 genres, representing more than
11-23-2010 | Arts & Culture
Pilgrim's Tales, Inc.
New Spanish Edition of Award-Winning Book, Yak Butter Blues, Leads Readers on an …
A Tibetan Journey of a 1000 Kilometers Began with One Bold Step. “Impossible” was what everyone told Brandon Wilson and his wife Cheryl when they spoke of hiking a 1000-kilometer (650-mile) pilgrimage trail across Tibet from Lhasa to Kathmandu. There were plenty of cards stacked against them, but those “impossibilities” only made them more determined. Their quest to become possibly the first Western couple to trek this path across the earth’s