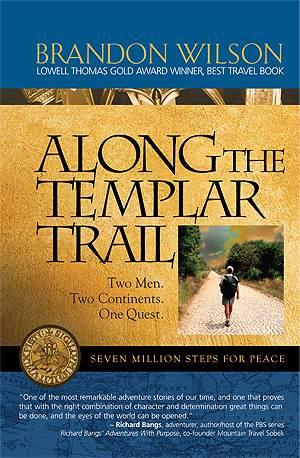 Pilgrim’s Tales, publisher, is proud to announce that Brandon Wilson’s award-winning series of four travel adventure books is now also available from Amazon.com for Kindle.Brandon Wilson, a Lowell Thomas Gold Award-winner and Explorer Club member, is most recently author of “Over the Top & Back Again: Hiking X the Alps” (ISBN 9780977053636/ 9780977053629), which received the 2010 Book of the Year Bronze Award (travel essay category) from ForeWord Reviews. It is the story of an intrepid midlife couple who dig deep to face their most gonzo escapade ever—hiking the daunting 2000-kilometer Via Alpina across eight countries. Besides promising total immersion into Alpine life and wilderness, it meant climbing the equivalent of 12 Mt. Everests—and facing their greatest fears. Join them in this empowering, original, and wildly subversive tale. Includes photos and maps by the author and illustrations by Ken Plumb.Other books in Wilson’s true-adventure series include “Along the Templar Trail: Seven Million Steps for Peace” (ISBN 9780977053698/9780977053681). This heartwarming and impassioned odyssey was named 2009 Best Travel Book by the prestigious Society of American Travel Writers, and chosen as a Book of the Year Finalist by ForeWord Reviews. Following in the footsteps of the legendary first Knights Templar, an American and a 68-year old Frenchman embark on an inspiring quest. Traveling simply on foot and trusting in the kindness of strangers, they carry a message of peace across two continents to Jerusalem. After the Middle East erupts in war, everything remains uncertain—except their steadfast and perhaps life-threatening resolve. Includes photos and maps by the author. A new German edition will be published in late 2011.Wilson is also the author of “Dead Men Don’t Leave Tips: Adventures X Africa” (ISBN 9780977053650/9780977053643). After their overland “dream” safari from London to Cape Town turns into a living nightmare, a honeymooning couple sets off to discover Africa’s heart and soul on their own. Adventure is their companion as they cross the Sahara, climb Kilimanjaro, whitewater raft the Zambezi, hunt dik-dik with Pygmies, photo stalk mountain gorillas, and hop the gun-run through war torn Mozambique. This darkly humorous travel adventure offers an un-sanitized look at day-to-day life on a wild trip into the unknown. Includes photos by the author.“Yak Butter Blues” (ISBN 9780977053674/9780977053667) is the final in this series and his debut book. Join Wilson, his wife Cheryl, and their Tibetan horse, as they become the first Western couple to trek an ancient 1000-kilometer pilgrim's path from Lhasa, Tibet to Kathmandu. Facing lung-searing altitudes, slow starvation, illness, blizzards, Chinese bureaucracy and bullets, their incredible odyssey provides a riveting tale of human endurance, a look at the kindness of strangers—and at a Tibetan culture teetering on the edge of extinction. Little could prepare them for this ultimate test of resolve, faith... and very survival. An IPPY Award Winner. Includes photos by the author. A Spanish edition (ISBN 9780977053605) was published in 2010.Pilgrim’s Tales, Inc. publishes true stories of adventure, discovery and enlightenment. Their books are available worldwide in hardcover, paperback and digital formats (Kindle and Kindle apps for iPad, iPhone, iPod touch, PC, Mac, Blackberry, Android-based devices, and Windows Phone 7), from your favorite bookstore or Internet bookseller. Based in Hawaii, they are members of the Travel Publishers Association. Visit www.pilgrimstales.com for sales information, video trailers, photos, reviews, excerpts, interviews and more.Pilgrim's Tales publishes books of adventure, discovery and enlightenment. Members of the Travel Publishers Association, they are based in Hawaii.Pilgrim's Tales, Inc. P. O. Box 854 Volcano, Hawaii 96785 USA

06-07-2018 | Tourism, Cars, Traffic
Triphobo
Las Vegas Travel Tips
The city of Las Vegas is known as a universal goal of betting in the clubhouse that are situated over this city and the nightlife that is offered to the voyagers, who visit this goal from various parts of the world. For single ladies voyagers to Las Vegas, the season of New Year ought to have stayed away from as the city is uncommonly swarmed amid this time. Nonetheless, the
07-12-2017 | Advertising, Media Consulting, …
ReportsWeb
City Travel Briefing: Paris
Paris has been resilient as one of the world's leading tourist destinations despite a host of challenges related to security, accommodation and overcrowding. With a clear focus on reinventing the city for the modern traveller by transforming its infrastructure, culture and attractions, Paris is well placed to compete with emerging cities vying to become the tourist destination of choice. This report outlines Paris's strategy in attracting new (and old) holidaymakers
12-28-2016 | IT, New Media & Software
TKB GROUP
TRAVEL KA BAAP
Travel Ka Baap Travel World Under One Roof 28 December 2016, DELHI, INDIA TKB Group(www.travelkabaap.com) exists to provide Advance travel platform. Ultimately, the motto is to centralize the tourism industry at the single platform. Purpose –TKB Group exists to provide fast & feasible Travel Solutions, Consulting & Unique portal to Industries and individuals verticals in India and across the Globe.TKB Group sells solutions & results. TravelKaBaap is a growing company in which a traveler
08-16-2011 | Tourism, Cars, Traffic
South Pacific Travel
Tonga Travel Guide Launched
South Pacific Travel has launched its online Tonga Travel Guide with 125 pages of maps, photos, drawings, and travel information. Tonga.SouthPacific.org is based on the Kingdom of Tonga chapter from Moon Handbooks South Pacific, now fully updated by the original author David Stanley. The 11 digital map files used in the printed book have been modified for web use. The site outlines the many sports and recreation opportunities in Tonga. The
09-04-2009 | Leisure, Entertainment, Miscel …
Kanoo Travel
Kanoo Travel Launches New Luxury Travel Brochure
Partners with American Express Vacations to offer its Middle East customers a wide array of exciting travel destinations combining high quality with excellent value for money. Dubai, United Arab Emirates, September 1, 2009: Kanoo Travel, the largest travel company in the Middle East, today announced that it has partnered with American Express Vacations to launch a new luxury travel brochure for its customers in the Middle East. The first Kanoo Travel
04-08-2008 | Tourism, Cars, Traffic
BrilliantTrips
Resume Worthy Summer Travel
Marblehead, MA (April 7, 2008) – For those looking to get something more out of their summer travel experience, there is no need to look beyond the newly launched BrilliantTrips.com. Those aged between 18 and 26 years old can find a variety of specially tailored experiences focused on learning, adventure, cross-cultural understanding, volunteering, sustainable tourism, and ecotourism. The importance of travel abroad in today’s global marketplace is emphasized
Comments about openPR
OpenPR is clearly structured and remains true to its principle of confining itself to the essential parts. OpenPR has proven to be a very good and reliable partner to our media agency: Within the shortest time the releases are online and go down well with the media representatives. The success of OpenPR is reflected in the steadily increasing number of press releases. It is good that OpenPR exists!
Ursula Koslik, Director Marketing & PR, F+W Hamburg