Challenging year ahead for the Czech construction industry 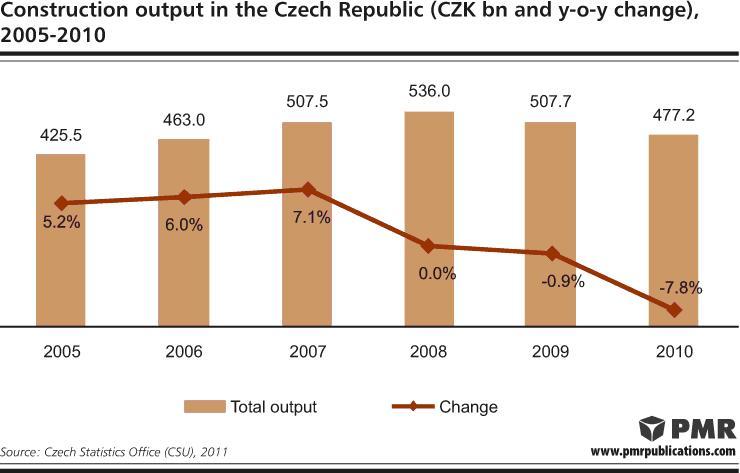 The Czech construction industry has been severely hit by the wider economic crisis experienced in 2009 and 2010. In 2009, gross domestic product contracted by more than 4%, and unemployment rose to more than 8% from 5.5% a year before. Fortunately, the economy began to recover in 2010, but the overall downturn has had an adverse effect on the construction industry. Construction output in the Czech Republic declined by 0.9% year on year in 2009, the first reduction in the decade. This followed several consecutive years of growth but was widely expected because of the difficult economic conditions and the subsequent reduction in demand. Unlike 2009, when the decline in construction activity was much less severe than the reduction in GDP, in 2010 the construction industry lagged behind the overall economy, with a 7.8% fall in construction output, in contrast to estimated growth of 2.2% in GDP. Long-awaited legislative changes which should support the industry are on the horizon. The Building Act, which has been the focus of the Ministry for Regional Development since last summer, is being reworked to speed up the application process for building permits. The changes will also lead to the elimination of much of the bureaucracy at local government level and will result in the closure of 231 local construction offices. These offices have typically been the cause of many of the delays which hamper construction projects.A major development in the country has been the adoption, on 20 January 2011, of a new strategy for transport infrastructure construction in the Czech Republic. This was introduced by the Ministry of Transport and is the result of six months’ work. The main goal of the ministry is to complete the construction of motorways and expressways in the Czech Republic, some of which were put on hold last year. The main construction projects in the field of road infrastructure are, according to the strategy, the construction of the missing section of the D8 motorway (which will pass through the Ceske Stredohori region), the completion of the Tabor section of the D3 motorway (on which building work is currently taking place), the construction of the R6 expressway between Karlovy Vary and Cheb and the completion of the section of the D1 motorway which leads to Poland. The plans also contain information on the funding allocated for infrastructure construction in the country, including a list of projects to be funded by means of public-private partnership (PPP) schemes. One of the first projects to be funded through a PPP scheme is the R35 expressway, which will link Hradec Kralove and the Moravia region. As it is indicated in the report by PMR, entitled: Construction sector in the Czech Republic 2011 – Development forecasts for 2011-2013, 2011 will be another challenging year for the Czech construction industry, but the new regulations and programmes adopted, along with the general recovery of the economy, provide an opportunity for a gradual resumption of construction activity in the country.PMR (www.pmrcorporate.com) is a British-American company providing market information, advice and services to international businesses interested in Central and Eastern European countries as well as other emerging markets. PMR's key areas of operation include business publications (through PMR Publications), consultancy (through PMR Consulting) and market research (through PMR Research). Being present on the market since 1995, employing highly skilled staff, offering high international standards in projects and publications, providing one of most frequently visited and top-ranked websites, PMR is one of the largest companies of its type in the region.PMR Publications ul. Dekerta 24, 30-703 Krakow, Poland tel. /48/ 12 618 90 00, fax /48/ 12 618 90 08 Contact Person: Anna Rojek, marketing@pmrcorporate.com www.pmrpublications.com