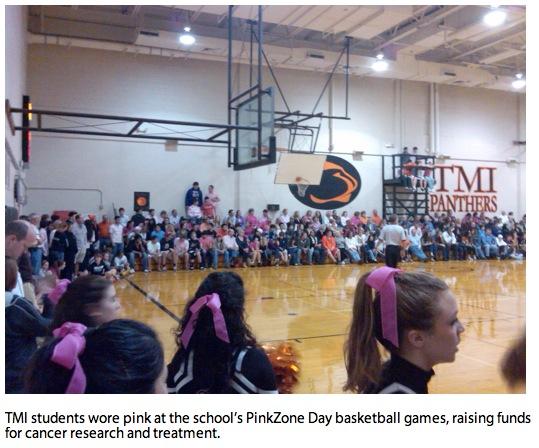 By supporting their basketball teams and wearing pink for a day, students at TMI – The Episcopal School of Texas raised funds benefiting cancer research and treatment. On Jan. 28, the school’s fourth annual PinkZone Day, the TMI Booster Club donated half of all gate proceeds from men’s and women’s basketball games. TMI students, who normally wear school uniforms, also could make a $5 donation to wear pink that day.Their contributions will be given to the Kay Yow Fund Cancer Fund in association with the Women’s Basketball Coaches’ Association. “Thanks to an incredible turnout at the basketball games and everyone who participated and contributed to our PinkZone Day, we were able to raise a total of $1,740.75,” says Stacey Patsko, TMI’s head women’s basketball coach.Named after former North Carolina State Women’s Basketball Coach Kay Yow, who was both a champion of women in athletics and women with cancer, the Kay Yow Cancer Fund is a charitable organization that fights against women’s cancers through raising money for scientific research and assisting the underserved.About TMI – The Episcopal School of Texas: Founded in 1893, TMI is a private, co-educational, college-preparatory school for grades 6-12, with optional Junior ROTC and boarding programs. For information, visit www.tmi-sa.org or call 698-7171.TMI – The Episcopal School of Texas 20955 West Tejas Trail San Antonio, TX 78257