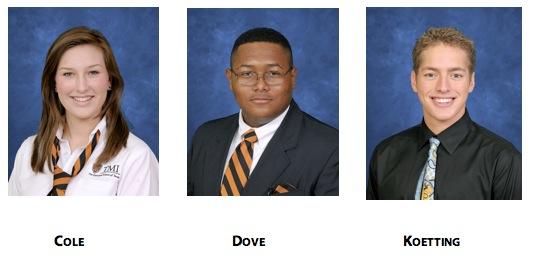 Three students of TMI – The Episcopal School of Texas were named to the Academic All-State Team of the Texas Association of Private and Parochial Schools (TAPPS).Juniors Abby Cole and Andrew Dove, along with senior Sean Koetting, qualified for the honor, which recognizes junior or senior student athletes who have earned a grade-point average of 90 or above, while distinguishing themselves in their sport. All three are honored for their contributions to TMI’s varsity swimming team, which ranked 12th overall in the state meet held last month in the Josh Davis Natatorium at Blossom Athletic Center in San Antonio. Koetting also is honored for his individual first-place wins in the 200 freestyle and 100 backstroke.About TMI – The Episcopal School of Texas: Founded in 1893, TMI is a private, co-educational, college-preparatory school for grades 6-12, with optional Junior ROTC and boarding programs. For information, visit www.tmi-sa.org or call 698-7171.TMI – The Episcopal School of Texas 20955 West Tejas Trail San Antonio, TX 78257