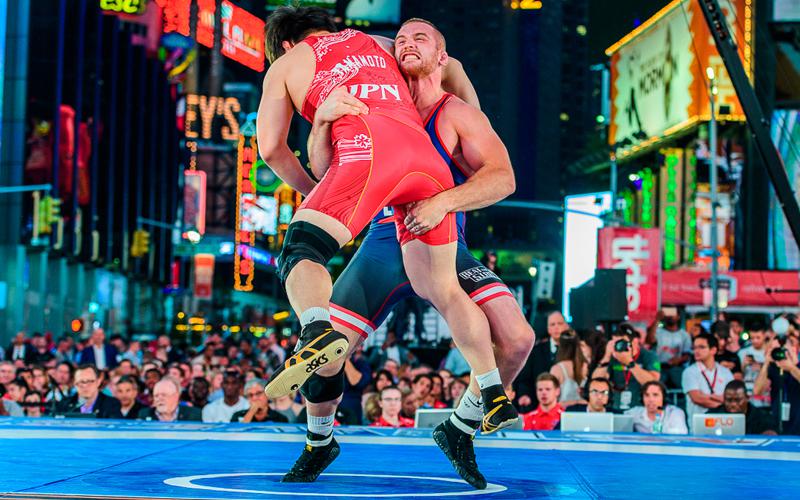 Beat the Streets Wrestling (BTS), the largest grassroots inner city wrestling program in the United States, and USA Wrestling announced today that the annual BTS benefit will be held on Monday, May 6, at the Hulu Theater at Madison Square Garden. This is the first time in six years that the annual event will be held indoors. Beat the Streets, Inc. will invite select members of the 2018 U.S. Men’s Freestyle World Team, which placed second in the 2018 World Championships and won seven World medals, as well as select top USA women’s wrestlers. The athletes will compete in freestyle wrestling. Team USA’s opponents will be announced at a later date. “When we decided to move the event indoors we knew there was only one place iconic enough to host it – Madison Square Garden,” said Beat the Streets Executive Director Brendan Buckley. “Thanks to the wrestling community, this event has really grown over the past few years and by having it at the Hulu Theater at MSG many more fans will be able to experience the event live in person.” This year celebrates the 10th straight year of Beat the Streets Benefit competitions, which began in 2010 and have since become a major showcase of the best of international wrestling. This unique and electrifying annual event has helped Beat the Streets raise millions of dollars to support local youth wrestling programs which empower young people in New York City. The first Beat the Streets Benefit was held on the U.S.S. Intrepid, an aircraft carrier docked on the west side of Manhattan. Since then, the benefit has taken place at other notable New York City spots like Grand Central Station and Times Square. Team USA has faced off against teams from around the world including Japan, Cuba, Russia and Iran. Last year, the competition was hosted at the new Pier 17 in the Seaport District and included the highly anticipated Burroughs vs. Chamizo match. The 2018 U.S. World Team, which competed in Budapest, Hungary, featured 2018 World champions Kyle Snyder, David Taylor and J’den Cox, 2018 World silver medalist Kyle Snyder, and 2018 World bronze medalists Joe Colon, Jordan Burroughs and Nick Gwiazdowski. Burroughs and Snyder are both multiple Olympic and World champions. Others on the USA team included 2016 World champion Logan Stieber, two-time World bronze medalist James Green and 2017 World silver medalist Thomas Gilman. New York City’s Madison Square Garden is one of the most famous sporting and entertainment venues in the world. The Hulu Theater at Madison Square Garden is an impressive venue with the capacity to seat over 5,000. The theater has hosted notable wrestling events including the 1998 Goodwill Games wrestling competition and the 2017 Grapple at the Garden college wrestling event. Ticket information and the final event schedule have not yet been finalized.About Beat the Streets The mission of Beat the Streets is to develop the full potential of the urban youth and to strengthen the culture of New York City wrestling. BTS works directly with the New York City Department of Education in a public-private partnership to bring the life changing sport of wrestling to over 3,000 New York City student-athletes to help them achieve their personal and athletic goals. Through the operation of wrestling programs in middle and high schools in the five boroughs, BTS and the DOE provide a safe, positive atmosphere in which disadvantaged and at-risk youth can learn the essential life lessons of grit, personal responsibility and teamwork, physical fitness and nutrition, and life-long learning. The goal of fostering strong, well-rounded student-athletes is delivered through coaching, after-school programs, life skills workshops, and summer camps. More information can be found at www.btsny.org. About USA Wrestling USA Wrestling is the National Governing Body for the Sport of Wrestling in the United States and, as such, is its representative to the United States Olympic Committee and United World Wrestling, the international wrestling federation. Simply, USA Wrestling is the central organization that coordinates amateur wrestling programs in the nation and works to create interest and participation in these programs. It has over 230,000 members across the nation, boys and girls, men and women of all ages, representing all levels of the sport. Its president is Bruce Baumgartner, and its Executive Director is Rich Bender. More information can be found at TheMat.com252 West 37th Street, Suite 400 New York, NY 10018