NCAA Champion Suriano vs. World Bronze Medalist Colon Added To May 6 At Beat the Streets Card 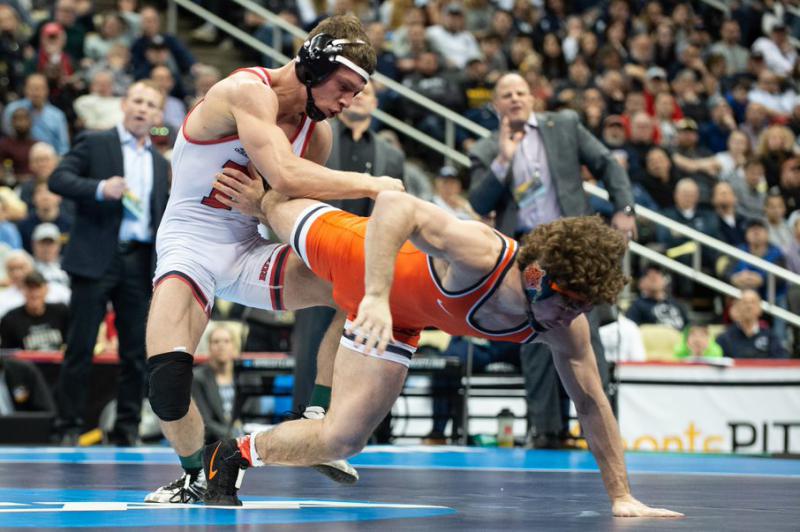 The depth of world-class-level matches on the 10th annual “Grapple at the Garden” Beat the Streets (BTS) benefit lineup was increased today as the organization announced a bout between current NCAA champion Nick Suriano (Paramus, N.J. / Rutgers Univ.) and 2018 World bronze medalist Joe Colon (Clear Lake, Iowa / Univ. of Northern Iowa) at 61kg. The bout is part of what is shaping up be a historic night of wrestling on May 6 at Hulu Theater at Madison Square Garden. Suriano was Rutgers’ first national wrestling champion (45 minutes before his teammate, Anthony Ashnault, who will also wrestle at BTS, did the same), taking the 133-lb. division in overtime last month over rival Daton Fix of Oklahoma State. The win capped the junior’s second straight appearance in the finals in a season which included a Big Ten championship, 29-3 record and second straight All-America honors. Colon, an injury replacement at the 2018 World championships at 61kg, defied the odds and won bronze in Budapest. As a senior at UNI in 2013-14, Colon finished 35-2 after a 27-4 campaign as a redshirt sophomore. His postcollegiate career has included a second place finish at the US World Team Trials in 2015 and a 2018 U.S. Open title. He currently trains in Fresno, Calif., where he also serves as volunteer assistant coach at Fresno State University. The matchup will be part of an already standout slate that includes featured bouts between 2012 Gold Medalist Jordan Burroughs and 2008 Olympian Ben Askren; an all-New Jersey match between James Green (Willingboro) and Anthony Ashnault (South Plainfield); and a battle of local State Champions in Jo Jo Aragona (Pope John XXIII HS/New Jersey) vs. Adam Busiello (Eastport-South Manor HS/New York). “Grapple at the Garden” supports Beat the Streets, the largest grassroots inner city wrestling program in the United States, serving as both a fundraiser for the organization and to celebrate its athletes as they compete on the biggest stage in the center of the world. Tickets for the evening’s action are available now via TicketMaster, priced starting at $30 at https://www.ticketmaster.com/event/3B005668AA091B69. A variety of donation packages which include “Grapple in the Garden” tickets are also available at https://www.btsny.org/bts-events or by emailing molalde@btsny.org, beginning at $1000. Doors open on May 6 at 5:30 p.m., with the main event starting at 6 p.m. For the fifth straight year, FloSports will provide live and on-demand coverage on FloWrestling.com. Beat the Streets, Inc. will invite select members of the 2018 U.S. Men’s Freestyle World Team, which placed second in the 2018 World Championships and won seven World medals, as well as select top USA women’s wrestlers.About USA Wrestling USA Wrestling is the National Governing Body for the Sport of Wrestling in the United States and, as such, is its representative to the United States Olympic Committee and United World Wrestling, the international wrestling federation. Simply, USA Wrestling is the central organization that coordinates amateur wrestling programs in the nation and works to create interest and participation in these programs. It has over 230,000 members across the nation, boys and girls, men and women of all ages, representing all levels of the sport. Its president is Bruce Baumgartner, and its Executive Director is Rich Bender. More information can be found at TheMat.com. 2019 Beat the Streets “Grapple at the Garden”252 West 37th Street, Suite 400 New York, NY 10018

You can edit or delete your press release NCAA Champion Suriano vs. World Bronze Medalist Colon Added To May 6 At Beat the Streets Card here

05-06-2019 | Business, Economy, Finances, B …
The Insight Partners
Third-Party Chemical Distribution Market Segmentation, Business Opportunities, G …
A third-party chemical distributor is an intermediate in the supply chain that sells or distribute the chemical product to the end user or the retailers. Chemical companies often collaborate with third-party distributors with various fees and provisions involved with the partnership. The third-party chemical distributor offer custom solutions that meet the specific needs for assembly, packaging and warehousing. These distributors have a thorough knowledge of the logistics, sales channel and
01-25-2019 | Industry, Real Estate & Constr …
Decision Market Reports
Electronic Article Surveillance Market Share, Trends, Technology & Financial Ana …
Global Electronic Article Surveillance Market Research Report 2019 presents the worldwide Electronic Article Surveillance Market analysis with in depth study of manufacturers, region, type and application and its future scope in the industry till 2025. The global Electronic Article Surveillance market is valued at million US$ in 2018 is expected to reach million US$ by the end of 2025, growing at a CAGR of during 2019-2025. Get Free Sample Brochure (PDF) of
01-11-2019 | Media & Telecommunications
qyreports
Know about the Evolving of Multi-channel Network Market and What makes it a Boom …
The Multi-channel Network Market report gives a well-defined perspective of the market alongside the development rate and the future market prospect. Assist the report covers market potential and preferred standpoint, opportunity and challenge and risks which is extremely helpful from business perspective. Multi-channel Network (MCN) are associations that work with different video stages. It oversees and gives administrations to an arrangement of video-sharing stages, for example, YouTube. It regularly helps
08-01-2018 | Industry, Real Estate & Constr …
MRRSE.com
Moderate Growth Projected for Global Collapsible Metal Tubes Market | Industry C …
The market for Collapsible Metal Tubes Market growing with the expansion of this Industry Sector Worldwide. Market Research Report Search Engine (MRRSE) has added a new report titled “Collapsible Metal Tubes Market - Global Industry Analysis, Size, Share, Growth, Trends and Forecast 2017-2025” which offer details about the current trends as well as scope for the near future. This research study also covers information about the production and market share
01-25-2018 | Health & Medicine
Healthcare Intelligence Markets
Sports Nutritional Supplements Market Overview & Industry Landscape by Focusing …
The research report, titled “Global Sports Nutritional Supplements Market” offers a clear understanding of the subject matter. The report has been hoarded using primary and secondary research methodologies. Both these methods are intended towards collaborating accurate and exact data relating the market dynamics, historical events, and the current market scenario. Moreover, Sports Nutritional Supplements market also includes a SWOT analysis that determines the strengths, weaknesses, opportunities, and threats impacting the
04-10-2017 | Business, Economy, Finances, B …
INDIAN INSTITUTE OF FINANCE
Global Ranking of Indian Institute of Finance (IIF)
India’s Delhi based Indian Institute of Finance (IIF)(www.iif.edu) has been ranked108th place among B-Schools in the Global Ranking of B-Schools in Asia Region out of 2638+ Universities / Institutions. Also Indian Institute of Finance (IIF) is amongst top 45% in the World from among 22,068+ World Universities / Institutions of higher education. Some of the Ivy League B-Schools in the Asia Region ranking include : Singapore Inst. of Mgt (1st);
Comments about openPR
Your portal is fast, simple, and easy to use. Others may have more functions but they also demand more editing time, you have to preformat the text in order to achieve a good result etc. I think openPR is really fantastic!
Andreas Knepper, wallmedien AG