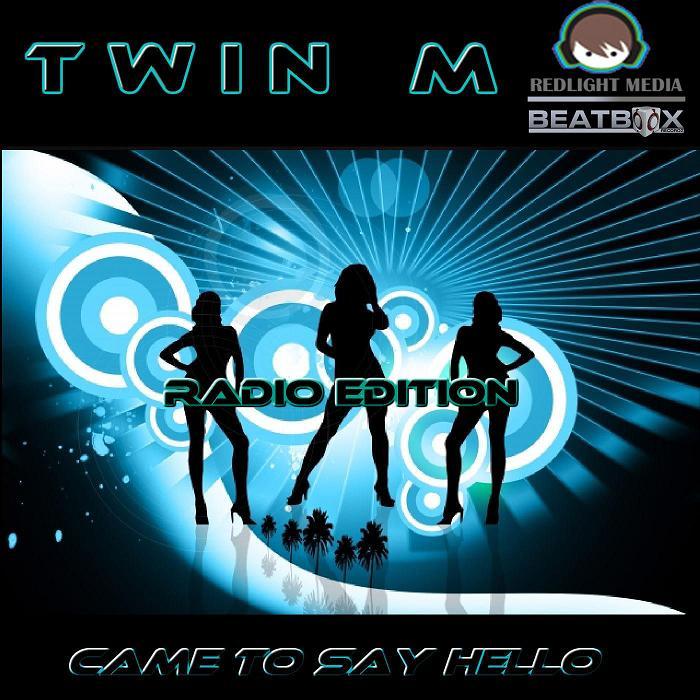 A new formation rises up into dance-pop sky. Twin M a dance project from Aachen, Germany enters the downloadstores with their first release “Came To Say Hello”. The Faces behind the radio fitting project are the german producer Michael V.(Emvace) and the songwriter and singer Michael H. Together they form Twin M. Everything started with a fun production. Michael H. wrote a text plus melody and Emvace produced a song out of it. It was obvious that there was a lot of interest in this song. That way the first demo was played in some radio station in summer 2010 already. Early November 2010 Twin M made contact with Redlight-Media and presented their song, together with Beatbox Recordz they agreed to a release. The vocals were rerecorded and the radio version reproduced. Emvace is in fact established in dance music. With the project M&Ace including Henny-M, he produced the original version of the hit “Turn Up The Volume” performed by Sandra Gee. In Addition he contributed remixes for the releases of 2SONIC, BULLJAY, EMPYRE ONE vs ENERG!ZER, LOLITA, MARCO VAN BASSKEN und VIBEKIDZ. With his own Project MVACE he published 2 tracks together with tierra already, as well as remixes for MARTINA DENNIS(together with NIGHTCLUBBERS), FORMEL DJ TEAM, HENNY-M, LUCA STEPHANO and some more. There are several Compilations he is represented on for example on TUNNEL TRANCE FORCE Vol 50 and FUTURE TRANCE 47. The songwriter of “Came To Say Hello” sings since he was small and loves to produce soundtrack and piano versions. With the song “Came To Say Hello” a dream comes true for him. It’s his first song being released in 210 countries. At the moment he works on vocals for a new ARTIC STARS single. Redlight-Media und BeatBox Recordz publish “Came To Say Hello” in two steps. The first step is a RADIO EDITION with 5 Radio Mixes. The second step is the CLUB EDITION which will include club-fitting remixes. In total there will be a remix by Emvace as well as Bazz Catcherz & Marq Aurel for the HandsUp Fans, a POP-Dance Mix made by ARTIC STARS (Canada) and a fat dancehall beat mixed with some echos and delays by S.M.A.W.. Came To Say Hello is a catchy Song that got a lot of fans already. The refrain gets right into the ears and invites to sing along. A solid Pop/Dance production that counts as a hit in a lot of circles.Redlight-Media unites independent label, dj-pool, distribution, publishing & management focusing on commercial Dance & Pop Music (Eurodance, Hands Up, Italodance, Pop-Dance, Pop, Electro and Trance)With many international releases, Redlight-Media is one of the new leading Dance indie labels.REDLIGHT-MEDIA Label / DJ-Pool / Distribution c/o Tesch Schlesische Str.21 D-40231 DüsseldorfPresscontact: redlight-rec@digital-filestore.de

12-07-2011 | Arts & Culture
Redlight-Media
Marq Aurel feat. MeeShaill new dance song
Turn up the volume for Marq Aurel's brand new winter dance hit featuring MeeShaill. Crackin basses warm up the floors during the cold season and enchanting vocals by the talented singer MeeShaill make this great track perfect. MeeShaill is the singing part of the TWIN M project and gave his voice to the song "Came to say Hello". After having great success with his latest releases "Road Rat", a co-production with BEATBREAKER which

01-11-2021 | Arts & Culture
Girl in the Jitterbug Dress
When You Can't Dance Because of Covid
When we can’t dance, because of restrictions and closures, we can read about it and immerse ourselves in our lost world. In 1943, Life Magazine declared Lindy Hop America’s folk dance. With its combination of African dance coupled with European partner dancing, brought to life by original American Big Band Swing Music, the Lindy Hop took the world by storm. There was no better place to Lindy Hop than Harlem’s Savoy Ballroom,
11-14-2017 | IT, New Media & Software
Fior Markets Research
Global Dance Studio Software Market 2017 - Zen Planner, Compu Dance, Dance Studi …
The Global Dance Studio Software Market Report will provide important aspects with overall outlook of the market worldwide. The market report delivers statistical data of market’s size in terms of both volume and value and forecast for Dance Studio Software market. The forecasts are further mentioned for the top segment of the Dance Studio Software market. Download Free Sample Report @ https://www.fiormarkets.com/report-detail/134267/request-sample In the beginning of the report, description of the market
04-23-2014 | Arts & Culture
Adelphi University
Adelphi University Department of Dance Presents Spring Dance Adelphi
Adelphi University Department of Dance is proud to present its annual program, Spring Dance Adelphi. This year’s Spring Dance Adelphi will be a mixed program and will take place from May 2-4 and May 9-11, 2014 in the Olmsted Theatre in the Adelphi University Performing Arts Center (AUPAC), located at 1 South Ave, Garden City NY. Thirty-eight students will perform in five pieces from five different choreographers, with musical styles
12-07-2011 | Arts & Culture
Redlight-Media
Marq Aurel feat. MeeShaill new dance song
Turn up the volume for Marq Aurel's brand new winter dance hit featuring MeeShaill. Crackin basses warm up the floors during the cold season and enchanting vocals by the talented singer MeeShaill make this great track perfect. MeeShaill is the singing part of the TWIN M project and gave his voice to the song "Came to say Hello". After having great success with his latest releases "Road Rat", a co-production with BEATBREAKER which
10-20-2011 | Tourism, Cars, Traffic
South Central Zone Cultural Centre, Nagpur
Orange City Craft Mela & Folk Dance Festival
The South Central Zone Cultural (SEZCC), Nagpur is organizing Orange City Craft Mela & Folk Dance Festival from 8th to 21st October, 2011 at the Centre’s premises, Civil lines, Nagpur. SEZCC, Nagpur, is one of the seven Zonal Cultural Centres, established in India in the year 1986 with its headquarters at Nagpur to preserve, promote and proliferate the cultural heritage and legacy of our Country. It constitutes
09-05-2011 | Arts & Culture
Nuevolution Dance Studio
Nuevolution Dance Studio Open House
Finally we are conducting our first open house at our new location. Free Admission to all who come. Many different classes and shows for that day. LA Style Salsa Argentine Tango Bachata Cha Cha Casino / Rueda Zumba Yoga Tae Bo and much more... Special Raffles Class Package Deals Nuevolution Dance Studio 8979 Taft Street Pembroke Pines, FL 33024 For more more information check out the website or give us a call www.nuevolutionsalsa.com 954-376-9841 "Innovate your Body and Soul" Nuevolution Dance Studio, the premier Latin Dance School in Pembroke Pines, provides students
Comments about openPR
Your portal is fast, simple, and easy to use. Others may have more functions but they also demand more editing time, you have to preformat the text in order to achieve a good result etc. I think openPR is really fantastic!
Andreas Knepper, wallmedien AG