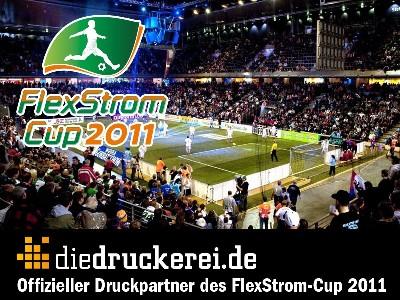 Partner of the indoor soccer tournament

Neustadt an der Aisch, Germany – diedruckerei.de is the official print partner of the renowned indoor soccer tournament FlexStrom Cup held in Berlin on 8 January 2011. Sponsoring the event, the online print portal www.onlineprinters.com produces the full range of advertising material like flyers and posters and the tournament magazine. The motto "Others print with colour. We print with passion" is more than just an advertising slogan for Onlineprinters GmbH. Rather it is a corporate philosophy that is actively lived in the company. "It is also passion that connects us with soccer, because no other sport evokes more emotions from spectators, fans and athletes. This is why we are happy to support the FlexStrom Cup 2011 with our high-quality printed products", explains Ulrich Dietzel, head of customer service with Onlineprinters GmbH.Long-standing tradition in professional soccer For years, the renowned tournament in the Deutschlandhalle had been firmly established in professional soccer. However, with the Bundesliga business becoming more and more demanding and the Europa League and Champions League gaining importance, the winter break has long become too short to hold a tournament in which Bundesliga pros can participate. This is why the legendary tournament was renamed into FlexStrom Cup and kicked off with a new concept in 2010. The next Cup will take place in Berlin on 8 January 2011. In the preliminary round, six renowned teams consisting of merited players traditionally connected to their clubs will compete against each other. In two groups with three teams each, the players will fight to qualify for the next round. The four best teams enter the semi-finals and mark the beginning of the tournament's knockout round. Active soccer players and ex-players of 1.FC Köln (2010 champion), Hertha BSC Berlin, 1. FC Union Berlin, Bayer 04 Leverkusen, Werder Bremen and Galatasaray Istanbul participate in the tournament. "More than 6,100 spectators watched the 2010 tournament in the Max-Schmeling Halle. In 2011, the number is expected to be even greater. And of course, we will be on site to cheer on the players", Ulrich Dietzel is pleased to comment on the presence of www.diedruckerei.de in the tournament.The FlexStrom Cup 2011 is broadcasted live by the TV station Sport 1 The indoor soccer tournament will take place in the Max-Schmeling-Halle in Berlin on 8 January 2011, from 2:30 p.m. to 8:00 p.m. Many soccer legends compete for the coveted cup in six traditional teams. Sport 1 (formerly DSF) will broadcast the 5.5-hours FlexStrom Cup 2011 live. In 2010, the event was the most watched indoor soccer tournament in Germany. For more information, go to http://www.flexstrom-cup.deOnlineprinters GmbH, based in the Bavarian town of Neustadt an der Aisch, is one of Europe's biggest online providers for printed matter presently employing some 300 people. In the online portal, business and private customers find over 90 percent of all types of standard printed materials in premium offset print quality and in flexible digital printing from in-house production. The broad spectrum of printed material includes printed business papers, such as corporate stationery and business cards, flyers, postcards and posters as well as adhesive-bound catalogues and saddle-stitched brochures. The company serves 25 countries of the European Union as well as Switzerland, Liechtenstein, Norway, Andorra and Monaco. Standard shipping is free to all private and business customers in Germany, Austria, Switzerland, the Netherlands, Belgium, Luxembourg, the Czech Republic and Italy. For customers in Poland, Great Britain, France and Monaco, shipping is free for orders exceeding 99 Euros. In 2010, the online print shop received the "Bavaria's Best 50" award for its excellent company development. To find product information in the print portal, go to www.diedruckerei.de and www.onlineprinters.comOnlineprinters GmbH Andrea Lachmuth Department Manager for Press & Public Relations Rudolf-Diesel-Straße 10 91413 Neustadt an der Aisch Germany Phone: +49(0)9161/620 98 01 Fax: +49(0)9161/66 29 20press@onlineprinters.com www.onlineprinters.com

You can edit or delete your press release FlexStrom Cup 2011 - diedruckerei.de Sponsors the Tournament as Print Partner here

12-05-2014 | IT, New Media & Software
Onlineprinters GmbH
Onlineprinters.com presents new corporate image film for company anniversary
YouTube video addresses change in print industry toward online printing Neustadt an der Aisch, Germany – "In 2014, we are celebrating 30 years of experience in printing and ten years of success in e-commerce. For the festive conclusion of our anniversary year we had a corporate image film produced that provides a profound insight into our daily business while addressing the change in the printing industry at the same time", Julia
10-17-2014 | IT, New Media & Software
Onlineprinters GmbH
New Christmas and 2015 products now available at onlineprinters.com
Personalised advertising products such as folding cards, stationery and calendars Neustadt an der Aisch, Germany – The Christmas spirit has arrived at the onlineprinters.com online print shop. "Customers wishing to design personalised business mail for Christmas, calendars or yearly wall planners for 2015 can do so more conveniently by using our free download templates and the online editor in the online shop," Julia Voigt, Marketing Manager of Onlineprinters GmbH, is pleased
09-26-2014 | IT, New Media & Software
Onlineprinters GmbH
Even more variety of brochures in the online shop of onlineprinters.com
Saddle stitching, adhesive or spiral binding in print runs of 1 to 200,000 Neustadt an der Aisch, Germany – The online shop onlineprinters.com has further expanded its variety in brochure printing. The brochures are available in the online shop and come with saddle stitching, eyelet binding or as spiral booklet. Newly added to our product range are brochures in small print runs. "We open up new buyer markets with them: those
09-12-2014 | IT, New Media & Software
Onlineprinters GmbH
Online Shop onlineprinters.com Opens New Customer Service Centre
International Team Answers Customer Questions From All Over Europe Neustadt an der Aisch, Germany – The customer service team of Onlineprinters GmbH, an online printing service provider active all across Europe, is growing: One million euros have now been invested at the German company headquarters in the Nuremberg metropolitan area: The expanded customer service centre received new office spaces and super-fast IT infrastructure for 40 jobs. “The centre of our attention is

03-04-2019 | Energy & Environment
Mediapak B2B
INDEVCO’s ‘Sanita Natura’ Recyclable Cup Shortlisted in NextGen Cup Challe …
‘Sanita Natura’ repulpable paper cup replaces current hot and cold cups lined with plastic and unlocks the potential for a valuable circular economy of paper. Zouk Mosbeh, Lebanon, February 27, 2019 (INDEVCO News Network) – Multinational manufacturing group, INDEVCO, announces that its specialty-coated repulpable and compostable ‘Sanita Natura’ paper cup was shortlisted in the top 29 entries of the NextGen Cup Challenge; 480 entries were submitted from 53 countries.
11-05-2018 | Logistics & Transport
Silver Service Taxi Melbourne
Melbourne Cup Day
The Melbourne Cup is annually held on the first Tuesday in 6th November with the day being a half day public holiday in Victoria and a full day holiday in Melbourne. In This event Silver Service Taxi Melbourne providing a taxi service in very affordable prices because in this event finding a taxi is very difficult and if you are lucky to get one it will cost you a fortune
08-31-2018 | Fashion, Lifestyle, Trends
Market Insights Reports
Disposable Paper Cup Market
Marketinsightsreports adds “Global Disposable Paper Cup Market by Manufacturers, Regions, Type and Application, Forecast to 2023” new report to its research database that gives a top to bottom investigation of the market as far as income and developing business sector patterns. The abstract includes business overview, product offering, revenue share, strategies, and service offering of the dominant players. This report covers several key areas in the Disposable Paper Cup market. Global
10-05-2016 | Sports
Newbreed Gear
Crystal Cup Venue Has Changed!
PLEASE NOTE THE NEW LOCATION! Weigh-ins will still be open on Friday Oct 7th from 5pm - 7pm at the NEW LOCATION: Southland Center 10 Southland Dr. Lynwood, IL 60411 Preregistration is now closed. You can still register at the door on either Friday October 7th between 5pm - 7pm or on Saturday October 8th.The doors open at 8am and the youth and teen competitors must be registered and weighed in by 9 am. Please see
03-04-2010 | Sports
Go Concierge
Go-Concierge answers World Cup travel woes
With less than 100 days until the start of the World Cup in South Africa, many people will be thinking seriously about their plans for the football tournament. Despite massive investment in the country’s infrastructure, there are still concerns about South Africa’s ability to transport the 3 million fans while they’re there. The country’s lack of established public transport is frequently cited as a factor that might hinder the success of
04-21-2008 | Leisure, Entertainment, Miscel …
Nare
THE AMERICAS CUP IN CHAOS
The Americas Cup has survived many trials and tribulations over its history, but the latest may threaten its very existence writes Martin Dinham of nare.co .uk. The Americas Cup (or Auld Mug as it is colloquially known) is the oldest sporting trophy in known existence, the first contest in 1851 pre dating the modern Olympics by almost 50 years. First won by the schooner America, the cup attained almost holy
Comments about openPR
9 o'clock: discuss press release with client, 10 o'clock: submit release to openPR, within the briefest possible time release is published and displayed in a prominent place on openPR.de. I am thrilled!
Zehra Spindler, Calypso Now! - Communication Agency