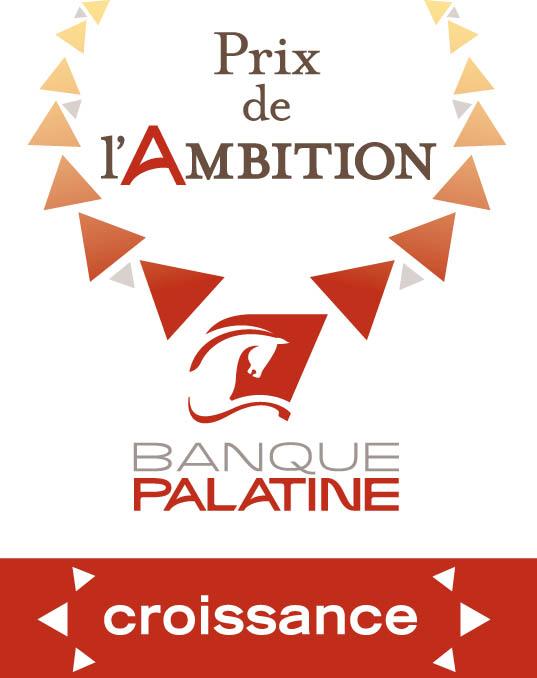 Hexis S.A., manufacturer of self-adhesive vinyl with headquarters in France, received the coveted Prix de l’Ambition jointly awarded by Banque Palatine, La Tribune and HEC Group, recognizing its continued growth performance.La Tribune, one of the leading financial newspapers in France, singled out Hexis amongst numerous medium sized businesses competing for the prize.The prize rewards Hexis, with 2 production sites in the South of France, for a sustained annual growth rate of over 35% over the past 7 years.The company manufactures a wide range of graphic vinyl and digital printing media used for sign making and vehicle markings.Hexis supports efforts aiming at a sustainable development and long term protection of the environment. Thus in 2006 the company invested EUR 400,000 in a high temperature incinerator in order to completely eliminate rejections of solvents used in the production process. They are burnt and only water and small quantities of carbon dioxide are released in the atmosphere.Hexis owns 2 manufacturing sites in the South of France and exports over 40% of its sales in over 40 countries, while enjoying sales of EUR 29 million in 2006.At its main site Hexis boasts a high tech R&D laboratory equipped with the latest scientific gear and is particularly proud of their innovative development of a cast vinyl film and a structured adhesive named Hex’Press that allows complete elimination of air bubbles during the application of self-adhesive media.Hexis, founded in 1989 by its current president, Michel Mateu, is a major European manufacturer of self-adhesive sign vinyl and large format digital printing media. Hexis is established in Frontignan, near Montpellier, France, and has a subsidiary in California, USA with affiliate Hexis companies in Italy, the Netherlands and the UK. The group has 135 employees.Martin Kugler Hexis S.A. Horizons Sud 34110 Frontignan France Tel. +33-467 18 66 84 Fax +33-467 18 36 98 e-mail martin.kugler@hexis.fr

10-10-2012 | Business, Economy, Finances, B …
Hexis S.A.
Michel Mateu of HEXIS wins Ernst & Young Entrepreneur of the Year Award
Michel Mateu, President of HEXIS S.A., manufacturer of self-adhesive media with headquarters in France, received the coveted 2012 Entrepreneur of the Year Award for the Mediterranean region jointly awarded by Ernst & Young and the news magazine L’Express recognizing his continued effort in innovative entrepreneurship. The prize rewards Mateu and his business, which operates 2 production sites in France, for his innovative entrepreneurial performance and an annual growth rate of over
05-12-2011 | Industry, Real Estate & Constr …
Hexis S.A.
HEXIS with New Cast Films at FESPA Digital 2011 in Hamburg
HEXIS will be exhibiting at this year’s FESPA Digital taking place in Hamburg, Germany to demo their Latex digital printing film and gloss laminate destined for wrapping applications. Both films are free of all materials with certain environmental issues such as PVC, solvents, plasticizers and heavy metals. The compound is flexible and conformable enough to be suitable for car wraps and in general applications that demand a conformable film. The HXL300WG2
09-18-2010 | Industry, Real Estate & Constr …
Hexis S.A.
HEXIS with new website
HEXIS launches its new Internet appearance: www.hexis-graphics.com With the new manufacturer's website HEXIS targets professionals, distributors and signmakers that are seeking information on products and solutions offered by HEXIS for their own activities and their businesses. HEXIS seeks to revitalize the availability of information and exchanges with all those interested in our company: customers, decision makers, prescribers, advertising agencies and journalists. The new site is more comprehensive and user-friendlier. Topics are directly accessible
04-22-2010 | Industry, Real Estate & Constr …
Hexis S.A.
Hexis Releases New Product Catalogue
Hexis, the vinyl manufacturer, has released the 2010 issue of their catalogue featuring a number of new products. The new catalogue comes redesigned with a fresh new look and feel and includes detailed product information. It includes technical details, applications for each product and recommended tools and laminates to use with each film. The catalogue was designed to assist customers in choosing the right product for their application. Hexis is proud to

06-05-2017 | Health & Medicine
ReportsWorldwide
Cigarettes in France, 2016
ReportsWorldwide has announced the addition of a new report title Cigarettes in France, 2016 to its growing collection of premium market research reports. "Cigarettes in France, 2016" is an analytical report by GlobalData that provides extensive and highly detailed current and future market trends in the French market. The report offers Market size and structure of the overall and per capita consumption based upon a unique combination of industry research, fieldwork,
12-07-2016 | Industry, Real Estate & Constr …
ReportBazzar
Packaged Food in France
Summary The slow but progressive exit from the persisting crisis of the French economy and the slight improvement in GDP growth in 2016 has contributed to current value growth of 1% in current value terms in packaged food. This is still modest and just in line with the CAGR seen over the review period, although this is in the context of strong price wars, stagflation and the detrimental effects of terrorist
10-01-2014 | Energy & Environment
WELTEC BIOPOWER GmbH
Biomethane for France
WELTEC Receives Order for Biogas Project with Gas Processing French agriculture has a wealth of raw and waste materials that are suitable for biogas plants. However, only half of the available materials are presently used for energy production. Thus, ambitious development plans have been drawn up: By 2020, the biomass share in the field of renewable energies in France is to rise to about 50 percent. No wonder that that the number
09-11-2012 | IT, New Media & Software
celum GmbH
celumday 2012 France
On October 4th 2012 the celumday France will take place at the Hippodrome d’Auteuil in Paris. The Tribune Présidentielle is the perfect meeting environment for customers, partners and interested parties to exchange ideas and discuss current developments as well as trends in managing brands and digital assets. At the celumday 2012 France you will experience that sportive competition and today’s business world have a lot in common: both strive to be
04-04-2008 | Sports
Speed:World:Cup
Speed:World:Cup France: Day 3
What an incredible day: 60 knots of wind, amazing speeds, upside-down timing caravan. We have rarely seen such a windy race day during competition - an experience that not many can share. Alexandre Caizergues and Charlotte Consorti, both from France, are still dominating the PKRA Speed:World:Cup in Port St. Louis. The day started calm, not very windy, and the skippersmeeting was scheduled for 9:30, due to the official function yesterday evening.
04-03-2008 | Sports
Speed:World:Cup
Speed:World:Cup France: Day 2
Epic conditions today in Port St. Louis, with three legs held in 30-40 knots of wind the race committee tested all skills of the riders, technical as well as physical. Alex Caizergues was the man of the day, with three bullets clearly in the lead now. In the womens fleet, Charlotte Consorti has also a perfect score with 4 out of 5 victories. Skippersmeeting was held at 9:00 and
Comments about openPR
Your portal is fast, simple, and easy to use. Others may have more functions but they also demand more editing time, you have to preformat the text in order to achieve a good result etc. I think openPR is really fantastic!
Andreas Knepper, wallmedien AG