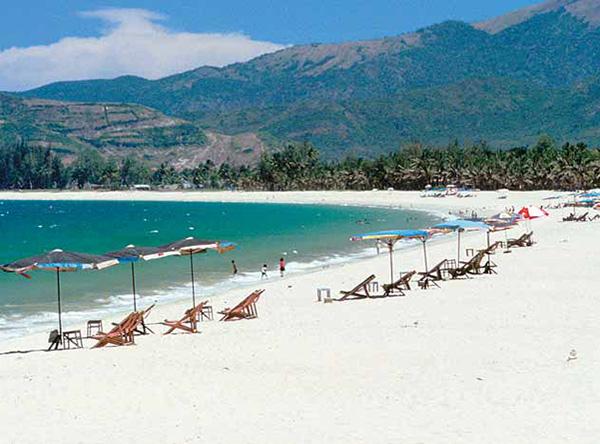 In Vietnam tourism authorities have outlined details of a ten-year plan which aims to attract more high-end tourists to its beaches.

Currently, more than seventy percent of the country’s tourists visit Vietnam’s coastal provinces but, according to the Vietnam National Administration of Tourism (VNAT), the country has failed to tap into this lucrative market.

VNAT deputy head, Nguyen Manh Cuong commented; "Getting ten customers who are willing to pay for luxury tours will bring us an income higher than one hundred customers who pay for regular tours."

Cuong added that the plan is to build luxury beach villages with villas, hotels and resorts capable of attracting high-end tourists.

Nguyen Thanh Huong, deputy head of VNAT's Marketing Department, said the number of tourists would be exactly the same but the numbers of high spenders would boost income from high quality tourism services and products.

Deputy head of the Vietnam Institute for Tourism Development Research, Pham Trung Luong, said that brand building had been given little attention in the past and would be of high priority:

"We will focus on products that are distinct from other countries in the region. The first step in brand building will be to create a logo and slogan for coastal and beach tourism. To allay fears about the adverse impacts of tourism on coastal ecology, plans will be well designed."

During the ten-year development plan, VNAT will discuss the benefits for local Vietnamese people with their local authorities.

Tourism authorities will also discuss ways to manage the sewage and wastewater issues in coastal provinces throughout Vietnam.

The pristine Phu Quoc Island in the southern Kien Giang province of Vietnam will also be targeted.

05-22-2018 | Advertising, Media Consulting, …
Spire Research and Consulting
Vietnam automobile lubricant market beckons
With automotive lubricant demand rising from 2.6 million liters (in 2015) to 4.1 million liters (in 2021), global and regional manufacturers are taking notice of the Vietnam market. How can brands win in this market? Leon Perera, Chief Executive Officer of Spire Research and Consulting, shared his insights on key trends in the Lube Report Asia magazine. With many players competing in the Southeast Asia market for motorcycle lubricants, leaders will
06-12-2017 | Industry, Real Estate & Constr …
ReportsWorldwide
Agrochemicals Market in Vietnam
ReportsWorldwide has announced the addition of a new report title Vietnam: Agrochemicals: Market Intelligence (2016-2021) to its growing collection of premium market research reports. The report “Vietnam: Agrochemicals: Market Intelligence (2016-2021)” provides market intelligence on the different market segments, based on type, active ingredient, formulation, crop, and pest. Market size and forecast (2016-2021) has been provided in terms of both, value (000 USD) and volume (000 KG) in the report. A
09-12-2016 | Politics, Law & Society
ITI-HOLIDAY
Environmental disaster in Vietnam
In Vietnam occurred the biggest environmental disaster since the deployment of Agent Orange by the Americans during the Vietnam War. It happened almost unnoticed by the world while Europe was busy with the refugee crisis and America with the forthcoming presidential elections of the USA. The perpetrators of the environmental disaster come from abroad and are supported by the Vietnamese politicians, similar as it was happen at the Vietnam War. "
09-08-2016 | Tourism, Cars, Traffic
ITI-HOLIDAY
Tourists killed in Vietnam
Vietnam belongs for tourists to the most popular and safest travel destinations in the world, as long as one can believe officially widespread reports. However, this information may not been longer current since a long time. More and more tourists in Vietnam were killed at criminal offenses as well by tragic accidents. These accidents occur mostly due to insufficient checking for compliance with statutory safety regulations by the Vietnamese authorities.
09-18-2012 | Tourism, Cars, Traffic
RNCOS E-Services Pvt. Ltd.
Booming Tourism Sector in Vietnam
RNCOS has recently added a new Market Research Report titled, “Booming Tourism Sector in Vietnam” to its report gallery. Vietnam has become one of the most popular tourist destinations in the South-east region. The country’s tourism industry has been growing unprecedentedly over the past few years with rising domestic as well as international tourists. The travel & tourism industry accounted for 10% of the GDP in the Vietnamese economy during
12-03-2011 | Logistics & Transport
Image Line Communications Ltd.
35 Years Service in Vietnam
Vietnam’s leading mutual marine insurer, the West of England, in conjunction with VINARE, held a conference for an unprecedented gathering of 130 senior members of the country’s shipping and insurance industries to celebrate its 35th anniversary of providing services to Vietnam’s shipowners last month in Nha Trang. The event featured updates on market conditions and industry developments by several members of the West of England’s management and by leading members of
Comments about openPR
9 o'clock: discuss press release with client, 10 o'clock: submit release to openPR, within the briefest possible time release is published and displayed in a prominent place on openPR.de. I am thrilled!
Zehra Spindler, Calypso Now! - Communication Agency