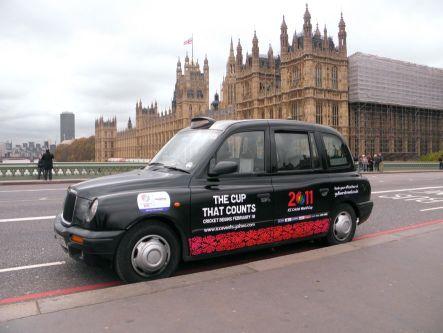 The International Cricket Council and Gullivers Sports Travel are gearing up cricket fans in England for the ICC Cricket World Cup 2011, which starts on 19 February.Gullivers, the official UK travel agent for the event, is urging fans to get behind the England team and support its mission to bring back the Cricket World Cup from the Asian sub-continent. To drive the point home, more than 150 ICC Cricket World Cup 2011 branded black cabs are hitting the cities of London, Manchester and Birmingham, calling on fans to make sure they book official packages with appointed provider, Gullivers.Gullivers has been working with the ICC since 1995 and its range of ICC Cricket World Cup travel packages starts at just £169 per person and guarantee official match tickets. Gullivers can also arrange tailor-made holidays, combining the cricket with some of the region’s many tourist highlights, including visiting tea plantations in Kerala, a houseboat stay, elephant spotting in Periyar National Park and the beautiful beaches of Sri Lanka. Hailed as ‘The Cup That Counts’, the England cricket team go into the tournament with high expectations after winning the ICC World Twenty20 2010 in the West Indies while also beginning its Ashes retention campaign in positive manner Down Under. Cricket enthusiasts will head to India, Bangladesh and Sri Lanka to support the 14 countries in the tournament, with thousands of people from the UK expected to travel to the event. For more information about Gullivers Sports Travel’s official travel packages please call 01684 878876 or visit www.gulliverstravel.co.uk.Gullivers Sports Travel is the UK’s leading and longest established rugby and cricket tour operator. Starting out as a high street travel agency, Gullivers Travel in 1971, the company became Gullivers Sports Travel in 1985 and market leader in this field. Gullivers Sports Travel’s reputation is based on personal service and a full understanding of the needs of sporting travellers, whether they are supporting or playing.Tuition House 27-37 St George's Road Wimbledon SW19 4EU