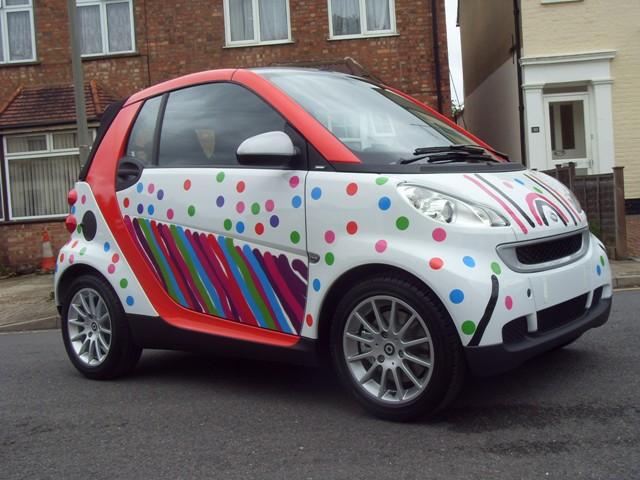 The winning Smart car design turned in to a reality

London primary school children have had the chance to design their own car as part of a competition run by Mercedes Benz Brentford.The competition, designed to support schools in the local area and encourage creativity, brought excitement to hundreds of school children as they were given the opportunity to design an attractive new livery for a Smart Car.Eighteen London schools were invited to enter the competition, which was judged by Mercedes Benz. The winner, from Isleworth Town primary school in Hounslow, then got to see their design turned in to a reality. The youngster’s drawing was cleverly re-created by vehicle wrapping specialists, Creative FX, who printed the multi-coloured stripes and spots design on to a special self-adhesive vinyl and then wrapped the Smart car.Creative FX Director, Sean Davis says "We're delighted to have been involved in such a fantastic project. The children's faces lit up when they saw the car for the first time – it was great!"The winner can now see their design everyday as Isleworth Town primary have been loaned the Smart car for a term.Creative FX is a Bromley-based company specialising in vehicle livery and automotive services, as well as signage and display projects.We specialise in the design, production and installation of vehicle wraps for both the commercial and retail sectors. Any design can be used from simple text and logo to a fully photographic vehicle wrap. We also provide stoneguard and window tinting services.As well as wrapping individual vehicles, the Creative FX team has also carried out projects for major car manufacturers, and has completed numerous special commission for events and charities, such as: Arsenal FC (Teenage Cancer Trust); Audi (the featured sculpture at the 2009 Goodwood Festival of Speed); Nissan (163 Union Jack-wrapped Micras, for the Government vehicle scrappage scheme): and an Electric G-Wiz, sold by Gordon Ramsay at a charity auction for nearly £50,000.Creative FX is an authorised supplier of vehicle badging for a number of leading car manufacturers including Audi, Toyota GB and Renault UK.Sean Davis Creative FX 020 8313 1146145 Masons Hill Bromley Kent, UK BR2 9HWinfo@fxuk.net www.fxuk.net

05-28-2019 | Health & Medicine
Young Innovations Europe
Smart Solutions
Heidelberg, May 28, 2019 – The dental group Young Innovations presents new products that increase efficiency and safety in the practice: The high-quality Galaxie Cassettes simplify the cleaning, sterilization and classification of hand instruments. A stable case made of electropolished stainless steel protects the equipment, the unique design reduces the contact points. A laser-cut pattern maximizes water through flow and increases efficiency in the RDG / thermal disinfector. Smooth rounded corners
04-16-2018 | Business, Economy, Finances, B …
ReportsWeb
Smart Mirrors
A smart mirror is an ordinary mirror with additional features and functionalities, incorporating capabilities that are otherwise done manually or in some computing system other than the mirror. For instance, a mirror that can connect to a smartphone or the internet and offer some measure of user comfort. The computing features in smart mirrors enable them to connect to the Internet and smartphones, categorizing them as connected devices. Connected devices
08-01-2017 | Logistics & Transport
Palau International Ship Registry
SMART SHIPS NEED SMART REGISTRIES
The shipping world needs to wake up and embrace the philosophy of smart shipping because it is already here and the downturn in the world economy is not going to last forever, according to Panos Kirnidis, CEO of the Palau International Ship Registry. “The maritime industry knows that smart ships and smart technology is the way forward and yet there seems to be reluctance on the part of some owners to
04-05-2017 | IT, New Media & Software
ReportsWorldwide
Smart Watch: Purchase Drivers
ReportsWorldwide has announced the addition of a new report title Smart Watch: Purchase Drivers to its growing collection of premium market research reports. This ‘360 View Update’ assesses the current state of the smart watch market. It quantifies how consumers purchase, use, and think about both smart watches and traditional watches. Findings help smart watch manufacturers, traditional watch manufacturers, and app developers refine their business strategies at this pivotal time in
11-28-2016 | IT, New Media & Software
TMR
Smart Kitchen Appliances Market ( Smart Refrigerators, Smart Dishwashers, Smart …
The rising demand for smart kitchen appliances is linked to their premium design that offers better effectiveness and more comfort than their traditional counterparts. With energy efficiency at its core, the global market for smart kitchen appliances is expected to surge at a robust pace in the near future.In a report titled “Smart Kitchen Appliances Market - Global Industry Analysis, Size, Share, Growth, Trends and Forecast 2014 - 2022,” Transparency
12-05-2014 | Energy & Environment
German Center for Research and Innovation
Smart Cities
By 2050, the world's population is expected to reach nine billion, with over two thirds of people living in cities. On Tuesday, December 9, ICT and sustainability experts will convene at the German Center for Research and Innovation (GCRI) in New York to discuss future solutions for urban systems. NEW YORK (December 3, 2014) – Urbanization, globalization, demographic and climate change are continually placing higher demands on our cities. How will
Comments about openPR
We publish our press releases on openPR.de because we like people who are "open" - just like us.
Frank Obels, CEO, INCONET - Informationssysteme, Communication und Netzwerkberatung GmbH