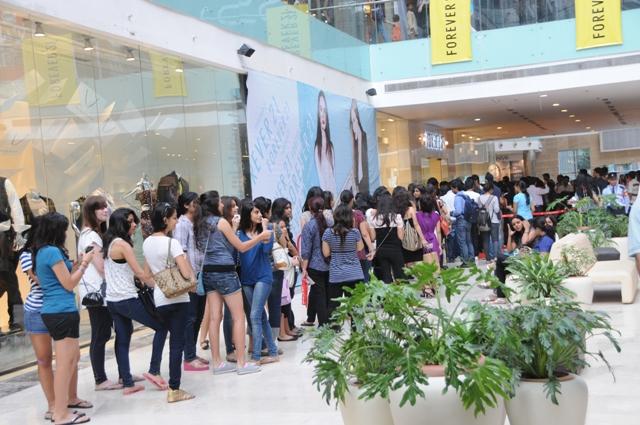 This autumn the US fashion chain Forever 21 opened its doors to the denizens of Delhi. The serpentine queues outside and later, the cash counters bore testimony to the brand having made the right impact. The store’s 10,000 sq. ft. area in the Ambiance Mall well stocked with clothes, shoes and accessories, shouted it was ready for combat. Prior to the opening, the marketing team, aligned to the mindset of today’s young generation, had been very active in social media marketing such as Twitter and Facebook. The company’s stores are normally large, 90,000 sq. ft. and 121 fitting rooms at the Times Square, for instance, compared to eight fitting rooms in the Delhi store. Conditions of which president Alex Ok can only dream of for the time being. He explained in his interview with the Indian magazine "Business of Fashion" that it was impossible to find an appropriate bigger and affordable location in the capital. It was also the real estate challenge that kept the brand from making its debut in the hotbed of fashion, Mumbai. Forever 21 whose USP lies in the product mix and quick turnover claims that their merchandise is changed and replenished every day. Also the pricing, starting with 99 Rupees, shall defy the big competitor Zara who recently opened in the neighboring mall „DLF Promenade“ with a similar hype and run on the store. Forever 21 has been brought to India by Hello Retail Pvt Ltd through the franchise model.Wide range of international fashion brands in IndiaBesides of „veterans“ such as Benetton and Pepe Jeans who came to India already in 1989 during the last two decades an illustrious group of international brands established in India, either on Franchise, Joint Venture or, more seldom, licensee basis. Here is an extract of the market entrances: Mango 2001, Nine West 2002, Tommy Hilfiger 2004, Aldo, Promod and Esprit 2005, Okaidi 2006, FCUK and Dolce & Gabbana 2007, Armani 2008, Beverly Hills Polo Club 2009 and Zara as well as Ebro in 2010. Ermenegildo Zegna, in India since 2007, plans to establish ten stores until 2015. Timberland just opened a store in Delhi and is planning further two in Chennai and Calcutta. OVS Industry recently entered a partnership with Brandhouse Retail. Gap is currently talking to potential partners as Reliance Retail, Arvind, Madura Garments and Shoppers Stop. The department store Marks & Spencer is represented on the subcontinent since 2001 with Reliance Retail.Hilfiger and Esprit in further expansionHilfiger envisages opening 500 Accessoires Stores with his partner Murjani within the next five years. Up to now the company’s products are available in 1.000 stores in 98 Indian cities. Esprit fashion is sold in 53 shops including 23 company-owned EBO (Exclusive Brand Outlets) in 11 cities; this number shall increase to 30 within the next three years. It is also considered to additionally expand through franchise partnerships. India currently does not contribute a significant percentage to the label’s annual revenues of $5 billion. Esprit has recently lowered its prices by 25 per cent on several offerings to attract more customers in India. Benetton resets the courseBenetton just reset the course: The "Times of India" wrote on 1st December 2010 that Benetton India Pvt. Ltd. sold roughly 100 stores it owned directly to its franchise network in an effort to de-risk its Indian operations. Benetton has been allowed to own its stores in India despite its 2004 split with its local partner. The move comes amid growing excitement on the possibility of the government relaxing foreign direct investment (FDI) norms in retailing. A 100% direct investment in the single brand and 26% in the multi brand retail are being discussed. But the jury is still out. Long-term investments in the fashion sectorIn spite of the existing structural weaknesses such as high rents, lack of appropriate locations and the difficulties in identifying profitable customer segments and future consumption patterns, India is, as the development in the fashion sector clearly shows, a promising field for long-term investments. The continuous growth of the Indian middle class and the increasing consumption will, we must hope, also push the Indian government to liberalize the market and to set the courses accordingly. India Fashion Forum 2011 in MumbaiAn excellent opportunity to get an overview on this comprehensive market and to experience and discuss the current trends and challenges on site is the India Fashion Forum (IFF). It will be held on 17th and 18th March 2011 in Mumbai, The Renaissance Hotel & Convention Centre. The 2-day-forum comprehends conference, exhibition, fashion shows and awards. Again about 1,500 participants from the Indian retail and fashion sector are expected. In the exhibition area roundabout 100 companies such as shopping mall operators, fashion brands and suppliers, store designers and shop fitters will present their products and services.The organizer Images Group is India’s leading b2b publisher for fashion and retail. www.imagesgroup.in, www.indiafashionforum.co.in, www.imagesfashion.comInternational press contact: Susanne Weller Parkstraße 27 40477 Düsseldorf/Germany Phone +49-211-16453973 Fax +49-3222-8358801 susanne-weller@t-online.deImages Group S-21, okhla industrial area, phase II New Delhi 110 020 Phone +91-11-40525000 Fax +91-11-40525001

04-18-2011 | Business, Economy, Finances, B …
Images Group, Delhi/India
INDIA RETAILSCAPE – A PROMISING FUTURE
The India growth story over the last few years, despite an intervening economic downturn, has been encouraging. GDP growth rate during the previous two years was about seven per cent. Growth has been fuelled by sustained investment and buoyant services. The Indian retail market has witnessed consistent growth over the last few years, maintaining its share of around 30 per cent of the GDP at current prices. These market observations are
12-01-2008 | Business, Economy, Finances, B …
Images Group, Delhi/India
INDIA - ALWAYS IN FASHION
India has always been a tremendously rich sourcing ground for fashion creativity. The world's leading fashion makers have very frequently been inspired by the diversity of India's colors, textiles and garments. In short, the country's relationship with great fashion is nothing new. It has always been there, but now, it is changing, as Indians modernize and globalize. The 9th edition of INDIA FASHION FORUM, to be held on 27/28 January 2009
Comments about openPR
We publish our press releases on openPR.de because we like people who are "open" - just like us.
Frank Obels, CEO, INCONET - Informationssysteme, Communication und Netzwerkberatung GmbH