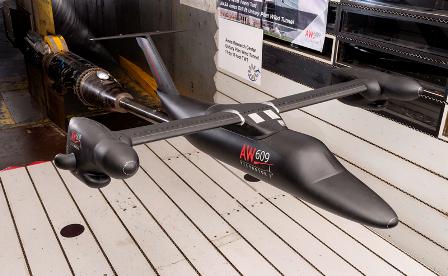 As part of a thorough review of the aircraft AW 609 behaviour, Leonardo Helicopter Division has performed a high speed wind tunnel test campaign at NASA Ames Unitary Plan 11 by 11 foot transonic wind tunnel. After a thorough assessment, the NASA AMES Unitary Plant 11’ by 11’ Transonic Wind Tunnel has been selected to obtain an accurate characterization of the aircraft in full scale conditions up to the highest speeds. The facility is pressurized transonic wind tunnel able to achieve full scale Mach numbers and Reynolds numbers close to full scale. In order to speed up the manufacturing process also for this model, the external fuselage and additional components were manufactured using the same approach chosen for the low speed AW609 model: Selective Laser Sintering technology and Windform® XT 2.0 Carbon-composite material. The parts were manufactured by CRP USA, CRP’s partner which is based in USA (Mooresville, North Carolina) under the control of the model supplier ATI Co. - Newport News (VA) CRP USA demonstrated how the use of Windform® composite materials, originally developed for the motorsports industry by CRP Technology, is now finding many uses in space and aerospace exploration. CRP USA also demonstrate the effectiveness of additive manufacturing and use of Windform® as a structural material for space applications: for the first time the Windform® XT 2.0 was used for an high speed model tested at NASA AMES facility.The architecture of the new 1:6 model for transonic high speed tests is very similar to the AW609 model but with some improvements in order to have the remote controls for the flaperons and elevator surfaces. Moreover the use of four different 6-components strain gauges balances allowed the acquisition of all the loads acting on the complete model, the wing alone, the nacelle and the tail surfaces.The model scale selected were 1:6 of the full scale in order to be fully compatible within the given constraints of the physical size of the NASA 11 by 11 tunnel. The model span was in the range of almost 2 m. The model were constructed to allow for mounting in the NASA 11 by 11 transonic tunnel, on a single strut straight sting support system. This testing encompassed speeds between Mach 0.2 to Mach 0.6 with high Reynolds numbers and a wide range of angle of attach and side slip.CRP Technology is headquartered in Modena, Italy. It is distinguished by its know-how in Selective Laser Sintering technology. It offers part production for short- and low-run production, and prototyping services with advanced 3D Printing and Additive Manufacturing solutions. As a material provider, CRP Technology develops, manufactures and sells its proprietary material Windform® for Laser Sintering. CRP Technology specific application fields including but are not limited to: automotive and motorsports, design, aerospace, UAVs, marine, entertainment, defense, and packaging.Veronica Negrelli Press Officer via Cesare Della Chiesa, 150/C 41126 Modena ITALY