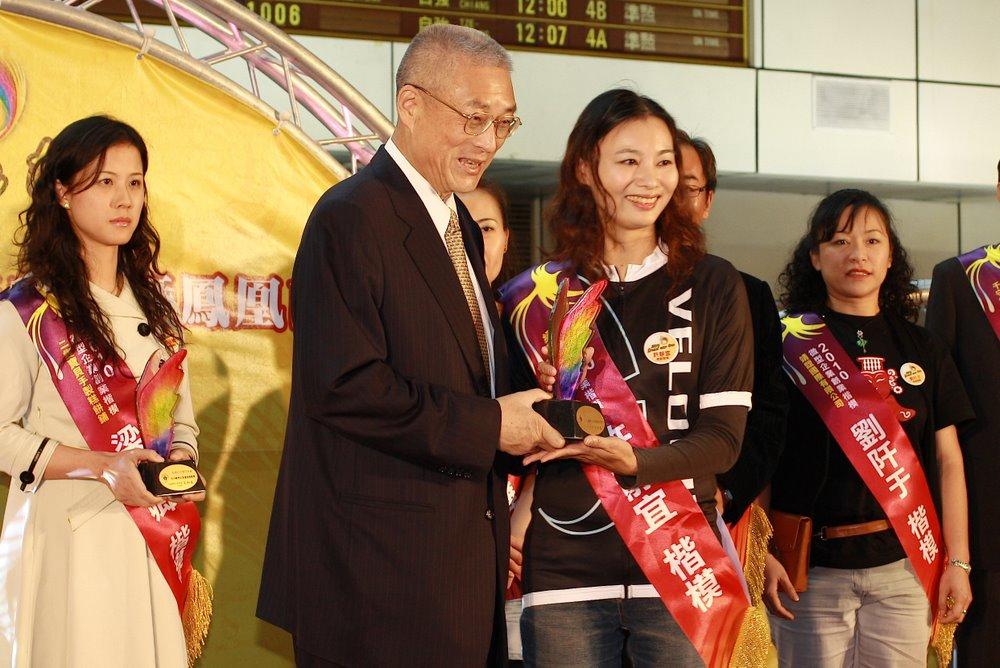 The Premier of Taiwan, Mr Wu, with Jessica Major, GM Velocite, with the Enterpreneurship Award

Velocite has been awarded with one of ten national entrepreneurship awards, presented by the Premier of Taiwan, Mr Wu during a public event held on the 4th of December in Taipei

KAOHSIUNG, Taiwan December 5, 2010 – The premier of the Republic of China, Mr Wu, presented the national entrepreneurship award to Jessica Major, General Manager of Velocite, during a ceremony held in Taipei on the 4th of December.

Velocite was selected by the Council of Labour Affairs as one of ten winners from 80 eligible applicants to receive the entrepreneurship award. The selection criteria included the success of market entry strategies, sales performance, and ability to create value for the economy.

“We are extremely happy to have been selected as recipients of the entrepreneurship award”, said Victor Major, CEO and Jessica Major, General Manager of Velocite Tech Co Ltd.

“Launching a new bicycle company in late 2009 during an economic downturn was seen as a risky move, but we not only launched, we managed to prosper. I believe that this is due to our uncompromising approach to product development and design, focusing purely on the high performance market niche.”, said Mr Major.

Velocite's successful market entry was assisted by developing a sizable customer base in a very short time, driven by a well received Velocite Sponsorship Program for amateur and semi-professional cyclists.

“We could not have done as well as we have without extensive help and support from our excellent team who work tirelessly to deliver on our business objectives. We would also like to thank our suppliers and manufacturing partners for their support and belief in us and our business.”, added Mr Major.

About Velocite Tech Co Ltd.
Launched in 2009, Velocite is firmly dedicated to making high performance bicycles, bicycle frames, wheels and components. Velocite is a company focused on achieving engineering excellence where the first and foremost priority is to apply the relevant engineering and scientific principles when developing new products in order to deliver the best riding experience. Additionally, the company is also committed to grass-roots cyclist development and has since 2009 run a sponsorship program for amateur cyclists worldwide.
Comprehensive information about Velocite, Velocite Sponsorship Program and the complete Velocite product range is available at www.velocite-bikes.com.

04-10-2019 | Business, Economy, Finances, B …
COSS.IO
COSS Exchange Undergoes Major Revamp
Singapore, Feb 27, 2019 -- Singapore's leading cryptocurrency trading platform is proud to announce its extensive overhaul which includes major improvements in its engine, user interface and a variety of long-anticipated features, all of which can potentially catapult it into the top flight of the crypto-exchange leagues globally. With a scalable architecture that can handle one million orders per second per pair, the new COSS engine 2.0 corners the market on
03-04-2019 | Business, Economy, Finances, B …
Masterbatch Market Sales
Masterbatch Market || Major Players
Masterbatches are solid or liquid mixture of additive or pigments used for coloring or enhancing other properties of polymers such as UV stabilizing, flame retardation, antistatic and antilocking. Masterbatches can be used by several technological methods including injection, blow, spinning and others. Growing end user markets such as packaging, automobile and healthcare is boosting the demand of masterbatch market. Moreover, increasing demand of plastics from construction and luxury goods packaging
01-07-2019 | Business, Economy, Finances, B …
Capital 19 Pty Ltd
Capital 19 announces Major Rebrand
Sydney based global stocks and options market leaders, Capital 19, has unveiled a new logo and a new website as part of an extensive rebranding initiative. The rebranding initiative has provided a platform to better acquaint prospective investors with our global investment expertise and capability and our unrivalled level of service that supports clients with a one-to-one personalised advisor service. “This rebrand represents a significant step in the company’s evolution. We’ve
09-30-2010 | Media & Telecommunications
IP500 Alliance
Major Companies formed IP500 Alliance
Berlin, Germany, (September 13th, 2010) DORMA, Gunnebo, JOB detectomat, Honeywell, LINK, SimonVoss, STG Beikirch, Swissphone, UTC, WAGO and more OEMs have now finalized the formation of an association (official Alliance) to drive interoperability and easy installation of smart devices in building automation applications based on IPv6. Key elements of the IP500 solution as the rising wireless standard for low-power smart sensor devices (internet of things and smart objects) is focused on
10-16-2008 | Business, Economy, Finances, B …
DEWB
DEWB with new major shareholder
Jena, 16 October 2008 – Erster Privater Investmentclub Börsebius Zentral GbR (Börsebius Zentral) is the new major shareholder in Deutsche Effecten- und Wechsel- Beteiligungsgesellschaft AG (DEWB) of Jena. The Cologne firm announced at the end of September that it had bought an equity stake of 21.2 percent. The passing of a number of statutory voting rights disclosure thresholds resulted from the consolidation of various legally independent regional investment clubs which
07-09-2007 | IT, New Media & Software
e-MedTools
Major MedSpel upgrade released
St. Louis, MO June 28, 2007 – MedSpel, a shareware medical spelling dictionary for Microsoft Word, has been updated for enhanced compatibility with Microsoft Windows Vista and Office Vista. MedSpel version 7.5 also includes many new medication names and an improved installation system. MedSpel works within the Microsoft Office spellchecker, so there is nothing new to learn about the spell check process. MedSpel has grown to include over 40,000 medical words
Comments about openPR
OpenPR is clearly structured and remains true to its principle of confining itself to the essential parts. OpenPR has proven to be a very good and reliable partner to our media agency: Within the shortest time the releases are online and go down well with the media representatives. The success of OpenPR is reflected in the steadily increasing number of press releases. It is good that OpenPR exists!
Ursula Koslik, Director Marketing & PR, F+W Hamburg