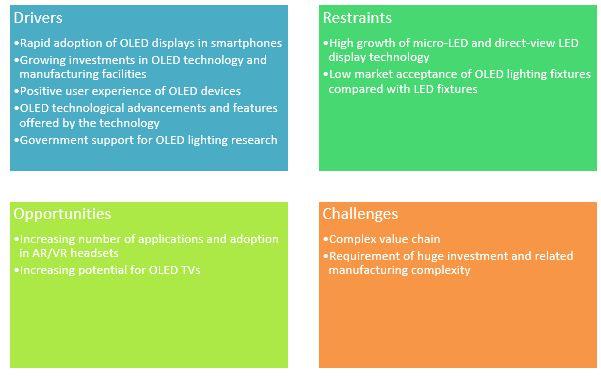 How the ncreased demand for AR/VR headsets acts as an opportunity for the market?OLED displays are lighter, thinner, and more flexible as compared to displays based on existing technologies. They emit bright colors. These displays are used in different applications in different sectors. They are used in mobile phones, TVs, wearable devices, etc. Samsung Galaxy series, Huawei P9 Plus, Oppo R9 Plus, Vivo X7 Plus, Xiaomi Redmi 3S, Lenovo Phab2 Pro, and One Plus 3 are the leading smartphone models or series using these displays. The demand for AMOLED displays in VR/AR applications is expected to increase as these displays are considered as the most appropriate for AR/VR applications, owing to their reduced response time and lower time latency as compared to other display technologies. Facebook invested USD 2 billion in Oculus, Google invested USD 542 million in Magic Leap, and Microsoft developed its own HoloLens. VR mainstream products, including Oculus Rift, Sony PlayStation VR, HTC Vive, and Gear VR, have adopted AMOLED displays.https://www.marketsandmarkets.com/Market-Reports/oled-market-200.htmlThe OLED market was valued at USD 16.58 billion in 2016 and is projected to grow at a CAGR of 15.2% between 2017 and 2023. Gain a Deeper Dive on a Specific Application, Geography, Customer or Competitor.Download PDF Brochure @https://www.marketsandmarkets.com/pdfdownloadNew.asp?id=200Several players in the automotive industry are investing in R&D activities to develop OLED lighting used in automotive. In 2013 and 2014, Audi and BMW collaborated with Philips and OSRAM Licht, respectively, to develop lighting products based on this technology for their cars. At the 2015 CES, BMW launched its concept iconic lights model based on this technology. These developments are expected to fuel the demand for OLED panels across the globe, thereby acting as an opportunity for the market.How the complexity of the OLED value chain acts as a challenge for the market?The emerging OLED market is characterized by a complex value chain involving product manufacturers, material suppliers, technology developers, and manufacturing equipment developers. For a niche technology, these complexities are increased manifold as there are no existing economies of scale in the short run. The mass adoption of OLED technology is expected to create a large demand for organic materials such as phosphorescent organic light-emitting diodes. However, the dynamic nature of the market makes penetration difficult, and the involvement of several value chain participants complicates the product development process and increases their time-to-market. The success of this technology is thus based on the effective collaboration of all supply chain participants. Widespread adoption of this technology and an increase in its applications are expected to stabilize the demand and significantly reduce the complexity of the OLED value chain.Adoption of OLED displays in smartphonesThe adoption of high-end smartphones with large displays has contributed to the demand for OLED panels worldwide as these displays offer highly bright screens, have low power consumption, and are thin and lightweight. Samsung Display is the leader in the production of small- and medium-sized AMOLED displays for smartphones and other applications. Samsung uses these displays in its flagship smartphone series such as Galaxy. Other companies such as Apple (US), Motorola (Lenovo) (China), Oppo (China), Vivo (China), HTC (Taiwan), and Gionee (China) have also started to adopt OLED display panels in their smartphones.Low acceptance of OLED lighting fixtures as compared to LED lighting fixturesHigh fixture costs, low efficacy, and short shelf life are some of the major drawbacks of OLED lighting fixtures. For instance, the cost of these lighting fixtures was USD 200 per kilolumen (klm) in 2016, and these prices fell to approximately USD 100–150/klm in large volumes. The typical performance of the current OLED lighting fixtures includes 60 lm/W efficacy, 50,000 hours shelf life, and excellent color rendering with CRI over 90 and R9 over 50. The current performance of these lighting fixtures is already suitable for most of the applications, but their efficacy is expected to improve in coming years. OLED panels have a low efficacy of 60 lm/W as compared to 120 lm/W of LED light sources. However, the mass production of these panels and the future market shift toward this technology are expected to reduce the impact of this challenge on the market in the long run. Mr. Shelly Singh MarketsandMarkets™ INC. 630 Dundee Road Suite 430 Northbrook, IL 60062 USA : 1-888-600-6441 sales@marketsandmarkets.comMarketsandMarkets™ provides quantified B2B research on 30,000 high growth niche opportunities/threats which will impact 70% to 80% of worldwide companies’ revenues. Currently servicing 7500 customers worldwide including 80% of global Fortune 1000 companies as clients. Almost 75,000 top officers across eight industries worldwide approach MarketsandMarkets™ for their painpoints around revenues decisions.