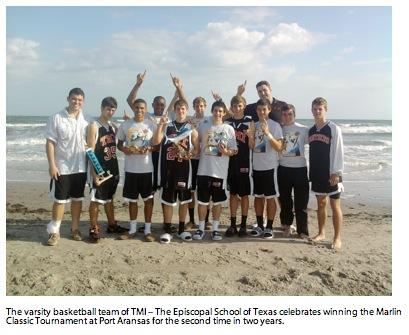 The mens varsity basketball team of TMI – The Episcopal school of Texas won the annual Marlin Classic Tournament, held Nov. 18-20 at Port Aransas High School. The Panthers won all four of their games to claim first place, while guard Nathanael Sherrod, a junior, won Most Valuable Player, and guard Mario Duran, also a junior, was named to the All Tournament team.“We are off to a good start this year,” said TMI Head Basketball Coach Chad Curran, whose team has won seven out of eight games so far this season, including a 64-55 victory over Medina Valley High School, a 4A public school that competes in the same district as Alamo Heights, Smithson Valley and Kerrville Tivy. “Our players have been working extremely hard since October, and it has paid off,” said Curran. “They have showed great character and determination in winning against some really good basketball teams.” The Panthers, who compete in TAPPS District 3-4A, previously won the Marlin tournament in 2008.About TMI – The Episcopal School of Texas: Founded in 1893, TMI is a private, co-educational, college-preparatory school for grades 6-12, with optional Junior ROTC and boarding programs. For information, visit www.tmi-sa.org or call 698-7171.TMI – The Episcopal School of Texas 20955 West Tejas Trail San Antonio, TX 78257