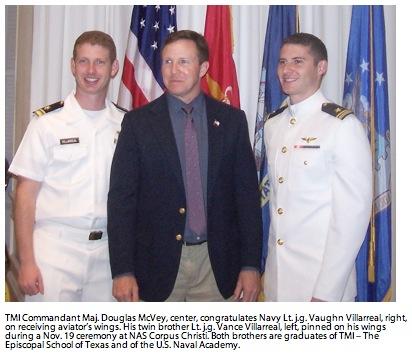 Navy Lt. j.g. Vaughn Villarreal, former battalion commander of the Texas Military Institute Corps of Cadets, received his naval aviator wings during a ceremony at Naval Air Station Corpus Christi. His twin, Navy Lt. j.g. Vance Villarreal flew in from Pearl Harbor, Hawaii, to pin on his brother’s wings.Both brothers graduated from TMI – The Episcopal School of Texas in 2003 and went on to graduate from the U.S. Naval Academy in 2007.The winging ceremony marks the completion of two-and-a-half years of flight school. Vaughn Villarreal, who earned a bachelor’s degree in Aerospace Engineering and a master’s degree in Aeronautical Engineering, has been assigned to NAS Norfolk, Va., for additional training on specific aircraft. His brother Vance majored in oceanography and has served as an officer on a Navy frigate.About TMI – The Episcopal School of Texas: Founded in 1893, TMI is a private, co-educational, college-preparatory school for grades 6-12, with optional Junior ROTC and boarding programs. For information, visit www.tmi-sa.org or call 698-7171.TMI – The Episcopal School of Texas 20955 West Tejas Trail San Antonio, TX 78257

03-12-2020 | Business, Economy, Finances, B …
MarketsandMarkets
Increasing Demand of UUV's From Navy Applications
"AUV market is expected to grow at higher CAGR during the forecast period." Based on type, the unmanned underwater vehicle market has been segmented into Remotely Operated Vehicle (ROV) and Autonomous Underwater Vehicle (AUV). The growth of the market can be attributed to the rising number of deep-water offshore oil & gas production activities and increasing maritime security threats. For AUV the growth mainly attributed to the increasing usage of AUVs
11-27-2018 | Business, Economy, Finances, B …
Insurance Navy
Insurance Navy Offers $50 Roadside Assistance
FOR IMMEDIATE RELEASE Contact: Anel Herrera Aherrera@insurancenavy.com Insurance Navy Offers $50 Roadside Assistance Palos Hills, Illinois- November 27, 2018- Insurance Navy is offering roadside assistance for $50 per six-month term. With roadside assistance, drivers are able to drive confidently and travel stress-free. Roadside assistance is a service Insurance Navy offers that is added onto an existing insurance policy. It provides assistance if a vehicle has mechanical problems while on the road. Roadside assistance
07-24-2018 | Associations & Organizations
SMi Group
Royal Navy, US Navy, DSA, Swedish Armed Forces, Royal Australian Navy, US Marine …
The Defence Safety Conference http://www.defencesafety.com/openpr, taking place at the Copthorne Tara Hotel, Kensington, London on the 1st and 2nd October 2018, will feature high level briefings from senior leaders on maritime safety. Conference organisers SMi Group are delighted to announce that the following speakers will all share their organisations priorities, challenges and solutions when it comes to enhancing maritime safety for the future: • Vice Admiral Ben Key, Fleet Commander, Royal Navy • Rear Admiral
03-20-2017 | Fashion, Lifestyle, Trends
Vision Strike Wear
US Navy Chiefs at SLF Norfolk Receive Their Navy Dolphin Shirts
When the Navy Chiefs at SLF Norfolk wanted the best in shirts for their Sailors they turned to Vision-Strike-Wear.Com The US Navy surface fleet like its big boys need constant protection from threats above and below the surface. The Mater Chiefs, Senior Chiefs and Chiefs of the United States Navy know this. When they searched the web they found a company whose primary focus was custom US Navy design and illustration.
03-17-2017 | Fashion, Lifestyle, Trends
Vision Strike Wear
RSO Oceana FCPOA Get Their Custom US Navy Shirts Today!
When First Class Associations want the finest in shirts they turn their creative goals to Vision-Strike-Wear.Com Whether it’s a perched crow atop the Liberty Bell, an F-18 screaming off the deck of a carrier for the FCPOA that are associated with these ships and commands or possibly it’s the location like NAS Oceana the FCPOA does want the best when it comes to their custom shirts. At Vision-Strike-Wear.Com they get it.
11-29-2016 | Fashion, Lifestyle, Trends
Vision Strike Wear
US Navy Corpsman Tribal Coin Released
Once again a highly detailed and exquisite coin has been released for coin collectors and United States Navy Corpsman! The detailed and highly sought after coins designed and crafted by Vision-Strike-wear.Com has come another amazing coin to be added to your coin collection arsenal: The US Navy Corpsman Tribal Coin. Detailed and bearing the original art of Frost Call, the lead designer of Vision-Strike-Wear.Com and its next level coin and apparel
Comments about openPR
Your portal is fast, simple, and easy to use. Others may have more functions but they also demand more editing time, you have to preformat the text in order to achieve a good result etc. I think openPR is really fantastic!
Andreas Knepper, wallmedien AG