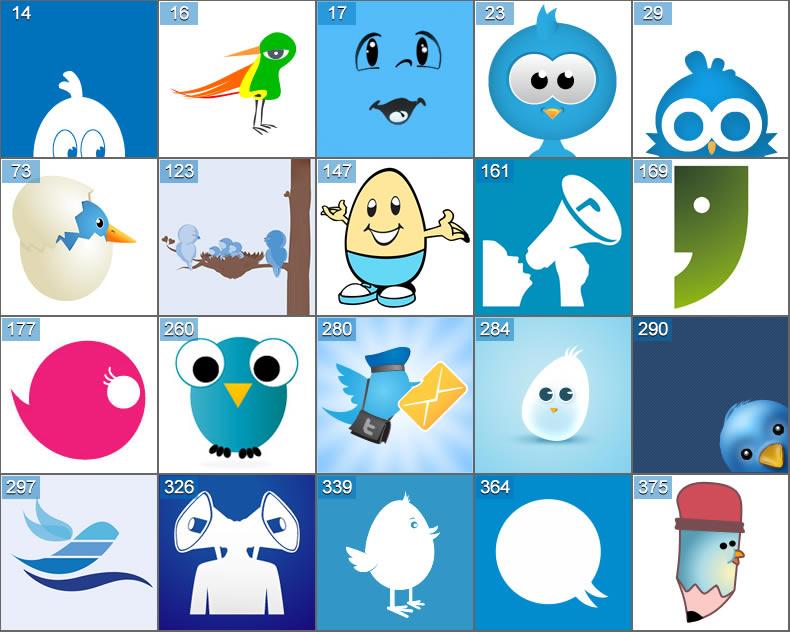 Twitter contest comes to an end. We are impressed by the great number of entries. Many designers all around the world, from the Saudi Arabia, Japan, Malaysia to US and Canada answered to our challenge and joined the contest. Lots of creative and interesting concepts have been submitted.Many designers started from the Twitter’s elements: the bird or the egg and developed funny, personalized and smart perspectives. Others built new scenarios, making connections between elements. Some of them try to catch the answer to the question: why people use Twitter? Some others tried to capture different personalities and moods of the Twitter’s users.391 entries to choose from…not an easy job for us! We made a list of 20 default avatars that you can see in the attached file. Now a jury of some great persons will decide the winning entry. Special thanks for accepting to be part of the jury to:Mark Randall – Chief Strategist at Adobe, Patrick De Laive – Co-founder TheNextWeb, Vladimir Oane – Co-founder UberVU, Octavian Cocis – Former teacher at Florence Design Academy, Gabi Lungu – Creative Director at Okapi Studio and Octav Druta – Co-founder SunnyTrail.We would like to hear your opinion too! Which of the top 20 designs is your favorite one?Palkoo is a crowdsourcing platform where highly-skilled designers from all over the world compete.Aliana Rateanu Palkoo Bucharest, Romania Stelea Spatarul Street 127510

11-23-2010 | IT, New Media & Software
Palkoo
Challenge for creative designers: what would you draw on the default Twitter ava …
About a month ago Twitter released its third avatar: the drawing of an egg, which has crossed the entire world with skepticism and questions. So Palkoo decided to launch a contest to explore the worldwide creativity! We ask designers: how should the default Twitter avatar look in your opinion? Or maybe they should have a gallery of thumbnails people may choose from? What would you draw on the twitter default

10-16-2020 | IT, New Media & Software
Thexyz Inc
Terminating Twitter API Integrations
Thexyz Inc, the leading private email service that protects people and their data announces that a Twitter authentication apps developed by Thexyz will be discontinued and no longer supported. Thexyz focuses on security, privacy, freedom, and an open internet that respects the rights of individuals. It is a goal to work with organizations that share these values and discontinue support for services that do not. Thexyz has developed applications
09-18-2020 | Politics, Law & Society
Servizio Media Word e Fotografie di Daniela Shams
Press release account suspension Twitter Daniela Shams
On Thursday 17 September 2020, the account of the publisher of Lifestyle4unique magazine was wordlessly blocked by Twitter. Daniela Shams has been on the platform since 2012 and is known for the slogan "honest, stylish, elegant". In this sense she maintains a cordial contact with her followers. It is one of many accounts where things are friendly. Daniela Shams attaches great importance to the fact that different views are mutually
07-22-2016 | Advertising, Media Consulting, …
quintly
Biggest profiles lose interactions on Twitter
The social media analytics provider quintly published a Twitter study analyzing 30,000 Twitter profiles during the first half of 2016. The analytics company reveals changes that are relevant for businesses which market on the micro-blogging service. While interactions for the biggest profiles analyzed dropped by 58% comparing H1 of 2015 with the present year, smaller profiles tend to receive more interactions than they used to. "The different aspects analyzed such as
06-06-2016 | Arts & Culture
http://mi2n.com/press.php3?press_nb=191611
Cpop goes Global with KKBOX and Twitter
SINGAPORE, May 31, 2016 - (ACN Newswire) - Twitter and KKBOX, Asia's leading music streaming brand, are working to expand the appreciation of Chinese pop music, or Cpop (#Cpop), to a global audience. KKBOX is creating #OnlyOnTwitter Cpop content on their official Twitter account (@KKBOX), including weekly live Twitter Q&A interviews with Cpop artists, autographed video clips from Cpop musicians and producers using Twitter's Challenger app, regular #KKvote contests to
08-04-2011 | IT, New Media & Software
Aaris Internet Solutions Pvt Ltd
Twitter Valuations Climb Post December
Mumbai, INDIA: In the news for its growing fan following and increasing popularity, Twitter is also putting money where its mouth is. There is an increased interest in Twitter, and there are deals being struck which redefine the company as we speak. Twitter is on the brink of closing out an $800 million dollar deal, which is set to pave the way for future growth. The move is also an attempt
01-14-2009 | Business, Economy, Finances, B …
Messe Frankfurt Exhibition GmbH
Musikmesse now on Twitter
Musikmesse is the world's biggest international trade fair for musical instruments, music software & computer hardware, sheet music and accessories. Around 75,000 trade visitors from the musical-instrument sector, manufacturers, dealers, professional and amateur musicians made their way to Frankfurt for the last event in March 2008. Musikmesse is complemented perfectly by the Prolight + Sound trade fair, which is held at Frankfurt Fair and Exhibition Centre at the same time.
Comments about openPR
We publish our press releases on openPR.de because we like people who are "open" - just like us.
Frank Obels, CEO, INCONET - Informationssysteme, Communication und Netzwerkberatung GmbH