Metrology in the fast lane 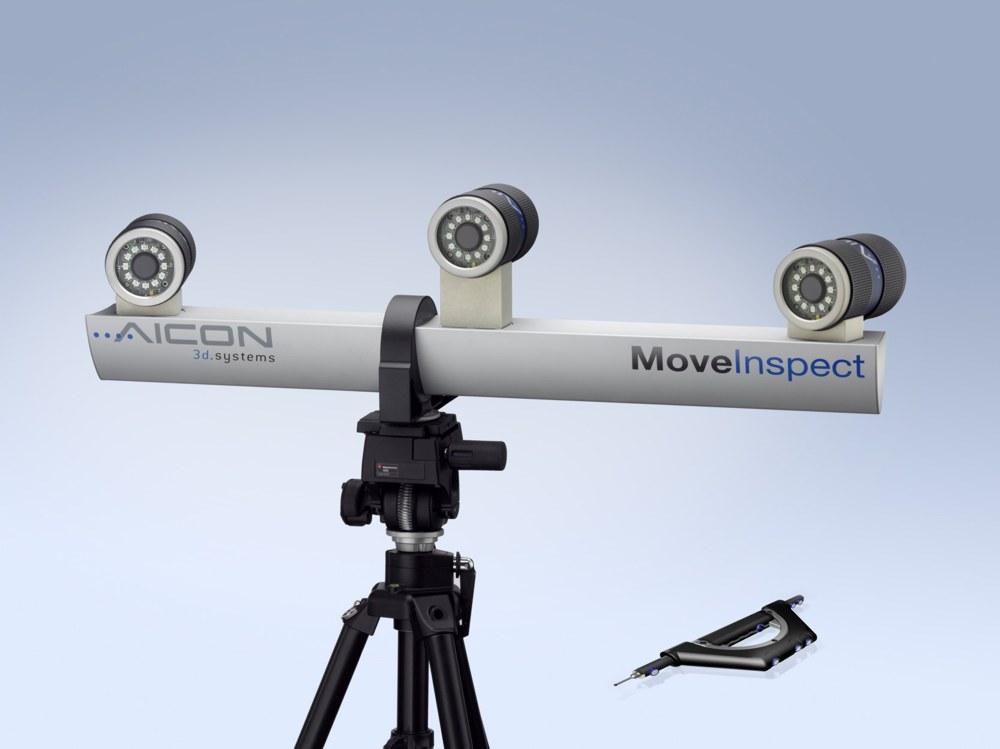 Object alignment with MoveInspect HR is much faster than with articulated arms or laser trackers!Braunschweig, 1 December 2010 – At the EuroMold show which opens its gates today in Frankfurt/Main (Germany), AICON showcases the optical measuring system MoveInspect HR. With immediate effect, this system can be used for the alignment and positioning of objects. Aligning components or machines is a daily routine both in prototyping and production: In vehicle production, the door to be mounted has to be placed in the right position to the door cutout. A component that is supposed to be milled has to be aligned to the milling machine. And when a new machine is integrated into the manufacturing process, it must be brought into position. These examples show only a fraction of the positioning and adjusting tasks in production. However, the requirements are the same in all cases: The position of the measuring object has to be inspected geometrically on the basis of specified data (CAD or reference data) by measuring the relevant points on the object. Then, deviations to the target position have to be corrected. Quite often, this task is solved with the help of laser measuring systems (laser trackers) or probing systems like articulated arms. These have a huge drawback though: They inspect the relevant points on the measuring object step by step, successively. So when the measuring object is moved during alignment, all points have to be remeasured several times. In contrast, MoveInspect HR measures all points at the same time. This is possible because AICON’s optical measuring system is able to measure and correct an arbitrary number of measuring points simultaneously.The system works with reference points, e.g. CAD datum points, and captures them at any time. Thus, the three dimensional reference is valid throughout the whole measurement cycle, even when the object or the measuring system are moved for further modification of features. Hereby, MoveInspect HR knows at any moment where the test object is located in space. With MoveInspect HR, it is even possible to measure hidden points. For this there is a trick: Before the measurement begins, the operator has to ”inform“ the measuring system about these points. For this purpose, adapter points are fixed in the visible area of the object. Then, the hidden points are touched with the MI.Probe or equipped with real-time markers. Thus it is possible to detect the positions of the hidden points. These positions are then linked to the visible adapter points. By this means, you ensure that all points of interest can be measured. Subsequently, the measurement of the whole test object is started, in which all visible and hidden measuring points are acquired at the same time. In this way, the measurement task is solved with only a small expenditure of time.At the EuroMold show, the system will be showcased on AICON’s booth in hall 8.0, stand K55.AICON 3D Systems GmbH is one of the world's leading providers of optical camera-based 3D measurement systems. The company, which was founded in 1990, was a spin-off of the Braunschweig Technical University and the VW Group's R&D unit. At that time both AICON shareholders Dr.-Ing. Carl-Thomas Schneider and Dr.-Ing. Werner Bösemann were already working in the field of camera-based optical measurement technology. Today the company has 50 employees. AICON's reference list boasts renowned automotive manufacturers and suppliers, companies from the aerospace industry, and the areas of shipbuilding and renewable energies.AICON Press Contact: AICON 3D Systems GmbH Jutta Thiel Biberweg 30C D - 38114 Braunschweig Tel.: +49 (0)531 – 58 000 70 Fax: +49 (0)531 – 58 000 60 Email: jutta.thiel@aicon.de www.aicon3d.com

04-10-2019 | IT, New Media & Software
TMR Research
3D Metrology Market key players 2028 : GoM, Jenoptik, KLA-Tencor, Bruker Corpora …
3D Metrology Market – Introduction With the increasing demand for quality control, virtual simulations, and reverse engineering in the manufacturing industry, there has been a significant rise in the demand for ‘state-of-the-art’ 3D metrology equipment in industries such as aerospace, defense, automotive, construction, power, electronics, etc. Owing to the surging demand of these equipment, sales of 3D metrology surpassed a value of US$ 9 Bn in 2018 and are anticipated to
04-29-2011 | Industry, Real Estate & Constr …
AICON 3D Systems GmbH
AICON’s optical measuring system now with interface to PowerINSPECT
Braunschweig/Germany, 26 April 2011 – As of now AICONs optical measuring system MoveInspect HR will be delivered with a direct interface to Delcam’s analysis software PowerINSPECT. MoveInspect HR is a portable coordinate measurement machine, consisting of high-resolution digital cameras and the hand-operated MI.Probe. The data are collected by sampling defined measuring points with the probe. In doing so, the system even measures hidden points fast and precisely. In contrast to
05-04-2010 | Industry, Real Estate & Constr …
AICON 3D Systems GmbH
Tactile measurement with AICON’s new MI.Probe
Braunschweig/Germany, 30 April 2010 – Just in time for the beginning of the Control show, AICON launches the unique MI.Probe. It combines extraordinary design with technical finesse – and is easy to handle at the same time. The MI.Probe works in combination with AICON’s portable coordinate measuring machine MoveInspect. This measuring system uses high resolution digital cameras for data collection. They are either mounted on tripods or on a camera
12-02-2009 | Industry, Real Estate & Constr …
AICON 3D Systems GmbH
MoveInspect Technology – the new modular system for portable CMMs
A separate measuring system for each measuring task - this philosophy is a thing of the past. Today, due to economic reasons, measurement equipment must be applicable in a versatile way. AICON’s answer to this requirement is the new system concept MoveInspect Technology for the measurement of 3D coordinates. MoveInspect Technology will premiere at the EuroMold show in Frankfurt/Main (Germany). MoveInspect Technology is based on a unique modular system that allows
02-26-2009 | Industry, Real Estate & Constr …
AICON 3D Systems GmbH
Now also ready for climate chambers: Dynamic Measurements with MoveInspect
Braunschweig/Germany, February 25, 2009 – AICON’s optical measuring system MoveInspect captures dynamic processes three dimensionally and analyses them with regard to geometric changes. Thanks to a new climate control concept, MoveInspect is now also ready for analysing movements and deformations under extreme climatic conditions, for example in environmental chambers. Here, the optical system replaces mechanical travel sensors because it reduces the setup work significantly. MoveInspect is based on a camera bar
Comments about openPR
We publish our press releases on openPR.de because we like people who are "open" - just like us.
Frank Obels, CEO, INCONET - Informationssysteme, Communication und Netzwerkberatung GmbH