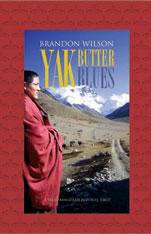 A Tibetan Journey of a 1000 Kilometers Began with One Bold Step.“Impossible” was what everyone told Brandon Wilson and his wife Cheryl when they spoke of hiking a 1000-kilometer (650-mile) pilgrimage trail across Tibet from Lhasa to Kathmandu. There were plenty of cards stacked against them, but those “impossibilities” only made them more determined. Their quest to become possibly the first Western couple to trek this path across the earth’s most remote corner was far from your usual travel fare – some even called it sheer lunacy. It was certainly far from easy or predictable. Spanish readers can now join them on their unforgettable journey. Yak Butter Blues: Una Caminata de Fe Por El Tibet (originally published as Yak Butter Blues: A Tibetan Trek of Faith, an IPPY Award winner) is an edge-of-your-seat tale of survival. Alone, with only their stalwart Tibetan horse Sadhu, the Wilsons face Tibet’s ruthless environment head-on: its relentless winds, extreme temperatures, the thinnest of air, blizzards and sandstorms…all made more challenging by exhaustion, hunger, illness, inflexible bureaucrats and trigger-happy Chinese soldiers. Although the 12-18,000 foot climbs and climate leave their mark, an even more lasting impression is created by Tibetan generous pilgrims, monks and villagers eager to share what little they possess with the modern-day adventurers: yak butter tea, the warmth of their fire, and a steadfast trust in the Dalai Lama’s return. Before long, the couple become pilgrims themselves and invaluable witnesses to a culture pushed to the brink of extinction. As they struggle to complete their journey before the path is blocked by winter’s snow, the Wilsons discover the human link connecting us all—a link that becomes clearest on a trek that removes the distractions of modern life. In doing so, they find a sense of greater purpose, wonder, renewed faith, and ultimately what it takes to endure and overcome all odds.Brandon Wilson’s Yak Butter Blues (translated into Spanish by Ramon Solé) sympathetically interweaves the story of Tibet’s survival with their own, creating a colorful, caring and classic tale. Join them for this true adventure across a startling land — on an historic thousand-kilometer odyssey once called “Impossible.”About the Author:BRANDON WILSON is the Lowell Thomas award-winning author of travel adventure books, a photographer, explorer and adventure-travel writer. A voracious explorer of nearly 100 countries, he’s passionate about inspiring others with the possibility of discovery through long distance trekking.His fascination with what he calls “slow, deliberate travel” began when he and his wife Cheryl became the first western couple to trek 650-miles across the Himalayan Plains from Lhasa, Tibet to Kathmandu. The peripatetic writer has now thru-hiked ten of the world’s great long-distance trails, including the Via Alpina, the Camino de Santiago and Via de la Plata across Spain, as well as St. Olav’s Way across Norway. He was the first American to hike the 1150-mile Via Francigena from England to Rome, and in 2006, he and a friend re-blazed the 2600-mile route of the First Crusades from France to Jerusalem on a walk for peace, naming it the Templar Trail.Their adventure was chronicled in Along the Templar Trail, the 2009 Lowell Thomas Gold Award-winner for Best Travel Book and shortlisted for ForeWord Magazine Book of the Year. Other books in Brandon Wilson’s travel adventure series include: Dead Men Don’t Leave Tips: Adventures X Africa, Over the Top & Back Again: Hiking X the Alps which chronicles their trek the length of the Alps, and Yak Butter Blues, which won an Independent Publisher IPPY Award. His photos have won awards from National Geographic Traveler and Islands magazines. His 50-page photo essay on Spain’s Via de la Plata was featured in Naïve & Abroad: Spain, Limping 600 Miles Through History by Marcus Wilder (2008).A member of the prestigious Explorers Club, Wilson is an activist for peace and human rights.Reviews:“Recommended for adventure travel and Tibetan culture collections.” ~ Library Journal“A moving and emotional testimony, and a travelogue that is the next most vivid experience to hiking upon the trail oneself.” ~ Midwest Book Review“A wonderful and wild read... His writing is charged, alive, and a little threatening. Yak Butter Blues flickers insistently like a flashbulb afterimage in the mind long after the book is tucked away.” ~ Richard Bangs, adventurer/television producer/co-founder Mountain Travel Sobek“A high-altitude tale of synchronicity, divine providence, begging monks, trigger-happy Chinese soldiers and dehydration.” ~ Pittsburgh Post-Gazette“A whooping good read—an outstanding production.” ~ Royal Robbins, renowned mountaineer “A soaring travel diary. It places the reader in the thick of the action every bit as well as Marco Polo transported Italians to China and, as it seems to me, better than Lowell Thomas led readers in the dust of Lawrence of Arabia.” ~ Maui Weekly“Told with humour and insight, you experience life at true Tibetan pace: so close, you almost smell the yak butter.” ~ Michael Buckley, author of Heartlands-Travels in the Tibetan World“Inspiring, Engaging, Compassionate! This book is a treasure to the Tibetan people and to the rest of the world. It gives us a true glimpse of Tibet and captures a beautiful land and culture that may not be around in years to come. Well done!” ~ Naomi C. Rose, award-winning author, Tibetan Tales for Little BuddhasYak Butter Blues: Una Caminata de Fe Por El Tibet by Brandon Wilson Translated by Ramon Solé and associates An Independent Publisher IPPY Award winner (English edition) 280 pages, Travel Narrative/Non-Fiction; 27 duo-tone photographs & maps 6" x 9" • ISBN: 9780977053605 • $14.95 perfect paperback Spanish edition published October 2010 by Pilgrim’s Tales, Inc. Distributed by Ingram, Baker & Taylor, Agapea, Gardners, Bertrams Available at: all Amazon.coms, BN.com, Blackwells.com (UK), Chapters.ca, SeekBooks.com (Australia), McGovern & Prentice's New Zealand. Online Books (NZ), or your favorite bookshopFor a preview with sample chapter and photos, visit PilgrimsTales.com.Pilgrim's Tales publishes books of adventure, discovery and enlightenment. Their book, Along the Templar Trail, was named 2009 Best Travel Book.Pilgrim's Tales, Inc. P.O. Box 854 Volcano, HI 96785

03-31-2021 | Tourism, Cars, Traffic
China Highlights
Top 8 Things to Do in Tibet
Tibet, the roof of the world, is every traveler's dream. The land keeps its centuries-old traditions, mysterious religious culture, and untouched pure natural scenery. Below are the top 8 attractions to see and things to do in Tibet according to their popularity and accessibility. 1. Explore the Potala Palace The Potala Palace is a symbol of Tibet. The majestic white and red building complex, set against grey/green mountains and blue sky, is an
03-08-2021 | Tourism, Cars, Traffic
China Highlights
Tibet is Going to Reopen for Travel
Have you been dreaming of a Tibet tour for a long time? It’s time to restart your travel plans now. Tibet is predicted to reopen to China expats in April 2021 after being closed for more than a year. Source: https://www.chinahighlights.com/tibet/ Building 6, Chuangyi Business Park, 70 Qilidian Road, Guilin, Guangxi, 541004, China China Highlights is one of the best China tour companies that specializes in customized and creative China tours. Our reputation
06-12-2017 | Advertising, Media Consulting, …
Lithium Hydroxide Market
Global Lithium Hydroxide Market Outlook 2017-2022 Sichuan GRM, FMC, Albemarle, S …
Lithium hydroxide is an inorganic compound with the formula LiOH. It is a white hygroscopic crystalline material. It is soluble in water and slightly soluble in ethanol, and is the weakest base among the alkali metal hydroxides. It is available commercially in anhydrous form and as the monohydrate (LiOH.H2O), both of which are strong bases. Ask For Sample Copy of Report : http://bit.ly/2sec07H This report provides detailed analysis of worldwide markets for
05-30-2017 | Advertising, Media Consulting, …
Market Research Store
Global Lithium Carbonate Market 2016 - SQM, FMC, Tibet Mineral, Yahua Industrial
The report that is written on the title Lithium Carbonate Market 2016 covers all the aspects of the global market study. This report has an estimation about the Lithium Carbonate Market size in terms of value (US$). The report contains the broad segmentation of the market. The report provides the information about the Lithium Carbonate Market and also forecasts its position in the coming years. Lithium carbonate is an inorganic
04-27-2011 | Arts & Culture
BFM Digital
Thundril (Unity) & Dhodma (Origin) An Offering To THE TIBET FUND Available April …
April 26th – Los Angeles, CA - BFM Digital, a leading digital music distributor of independent music, announces the release of two benefit albums “Thundril” and “Dhodma” in support of The Tibet Fund. This project, conceived by producers Joshua Jacobs, president, Synaptic Fusion Entertainment and Steven Weber, president, BFM Digital and Rinchen Dharlo, president, The Tibet Fund is intended to act as an instrument of awareness toward the current plight
01-28-2008 | Leisure, Entertainment, Miscel …
Tibet – Journey across a forbidden country
Tibet – Journey across a forbidden country, January 29th, 2008, ZDF, 20:15 h
The film music to the ZDF two-part travel documentary \"TIBET - Reise durch ein verbotenes Land\" (german title) The film music to the current ZDF two-part documentary “Tibet – Journey across a forbidden country” comes from the quill of the two composers Tobias Bösel and Siegfried Rolletter. The film was created according to the original diaries of the two Austrians Heinrich Harrer and Peter Aufschnaiter. The notes have remained undiscovered
Comments about openPR
I can't but agree to the positive statements about your portal: easy to use, clear layout, very good search function, and quick editing!
Jens O'Brien, Borgmeier Media Communication