HALCON flies with NASA-Robot into Space 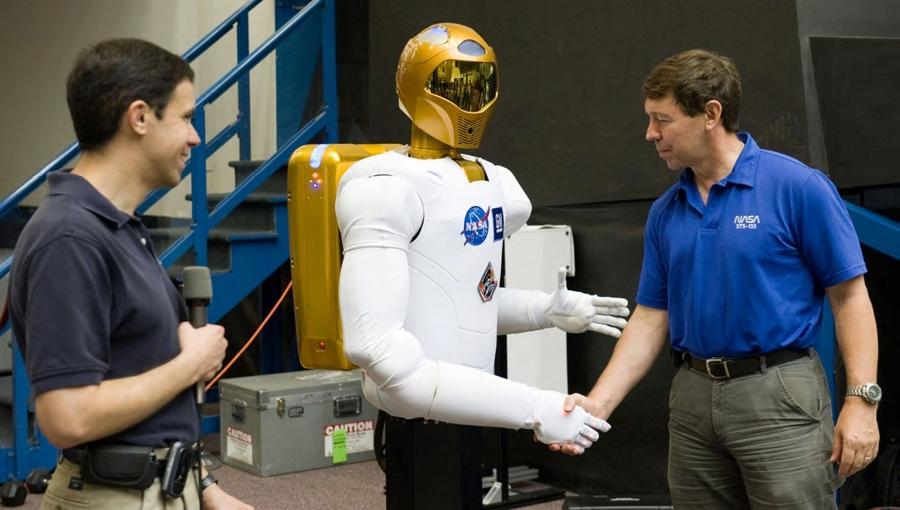 At the end of November 2010, the first humanoid robot astronaut flied into space, the Robonaut 2 (R2) which was jointly developed by the NASA and General Motors. R2 takes its visual decisions with the imaging software HALCON by MVTec (Munich, Germany).The Discovery will be launched as mission STS-133 to its very last space flight. Destination of this shuttle mission is the international space station ISS. On board of the Discovery are six human astronauts and one new colleague, the first of its “species”: It is the first humanoid robot in space ever, the so-called Robonaut 2 (R2). Amongst others, the Discovery carries an Italian multi-purpose module called Leonardo in its cargo bay. R2 travels safely cased in a special container inside of Leonardo.The Robonaut 2 is able to see autonomously and due to this fact to independently take decisions. The robot astronaut has full functional camera eyes and hands used for gripping and working. R2 comes with these skills as a result of the sophisticated image processing which was developed by the NASA with the algorithms of the standard software HALCON by MVTec (Munich, Germany). The software package HALCON includes all necessary technologies for 3D image processing. It is used to detect objects in their 3D pose from stereo images and to process in real time. Thus, R2 can see three-dimensionally and therefore decide in fractions of a second where and how its hands will pick up and deposit objects.During a first testing phase in space, the robot will work in a lab. Later, R2 will assist human astronauts for inside working, and some day it will even be available for extra vehicular activity. R2 will be advanced in this way that a next generation could assume interplanetary travels and take a landing on the Moon, the Mars, or a Mars moon. At this stage, HALCON is already armed for this purpose.More information: http://www.halcon.comAbout HALCON HALCON is the comprehensive standard software for machine vision with an integrated development environment (IDE) that is used worldwide. It leads to cost savings and improved time to market: HALCON’s flexible architecture facilitates rapid development of machine vision, medical imaging, and image analysis applications. HALCON provides outstanding performance and a comprehensive support of multi-core platforms, MMX and SSE2, as well as GPU acceleration. It serves all industries with a library of more than 1600 operators for blob analysis, morphology, matching, measuring, identification, and 3D vision, to name just a few. HALCON secures your investment by supporting a wide range of operating systems and providing interfaces to hundreds of industrial cameras and frame grabbers, including GenICam, GigE Vision, and IIDC 1394.About MVTec MVTec is a leading manufacturer of standard software for machine vision. MVTec products are used in all demanding areas of imaging: Semi-conductor industry, web inspection, quality control and inspection applications in general, medicine, 3D vision, and surveillance. MVTec has more than 30 established distributors, located throughout Europe, North and South America, Australia, and Asia (China, Japan, Korea, India et al.). In addition, MVTec, LLC works out of Boston, MA (USA), to better attend the North American market since 2007. For more information refer to www.mvtec.comContact: Dr. Lutz Kreutzer, Manager PR & Marketing | MVTec Software GmbH, Neherstr.1, D-81675 München Tel. +49 89 457695-0 | Fax +49 89 457695-55 | www.mvtec.com | press@mvtec.com

04-25-2014 | Industry, Real Estate & Constr …
MVTec Software GmbH
New HALCON Training Partner in Southern Germany
The Imaging Source Europe GmbH, long-standing partner of MVTec Software GmbH, extends the support and distribution activities in Southern Germany and becomes “MVTec Certified Training Partner”. MVTec’s distributor The Imaging Source strengthens the support and distribution activities of the machine vision software HALCON with their new sales office in Gernlinden near Munich, Germany. The Imaging Source is now part of the MVTec “Certified Training Partner” program, qualifying the employees to
04-23-2014 | IT, New Media & Software
MVTec Software GmbH
MVTec Introduces MERLIC – A New Generation of Vision Software
Munich, Germany - MVTec Software GmbH is pleased to introduce MERLIC, a new, all-in-one machine vision software product that enables users to quickly build complete solutions without programming. MERLIC offers a radically new user experience with novel interaction concepts, an image-centered user interface, and many easy-to-use tools. To keep up with the growing world-wide demand for machine vision technology, machine makers reduce development time by increasing productivity and efficiency of their
11-14-2013 | IT, New Media & Software
MVTec Software GmbH
MVTec Presents HALCON USB3 Vision Interface and 3D Vision Technology
As of now, the new universal HALCON image acquisition interface for USB3 Vision is available. This interface will be presented by MVTec in a live demo at the SPS IPS DRIVES in November 2013 in Nuremberg. Furthermore, MVTec will showcase the 3D vision technology of HALCON 11. Key benefits of the new USB3 Vision Standard are the high bandwidth in excess of 350 MB/s and an easy-to-use plug and play
09-18-2013 | IT, New Media & Software
MVTec Software GmbH
HALCON Helps Best Swimmers of the World
At the 15th FINA World Swimming Championships 2013 in Barcelona, Spain, a sophisticated vision system is applied to analyze the swimmers’ performances. This system was designed by STT Ingenieríy y Sistemas, San Sebastian (Spain), based on the vision software HALCON by MVTec (Munich, Germany). Coaches and athletes are always interested in improving their athletic performances. As in any sport, it is important for swimmers to study their technique. For this purpose,