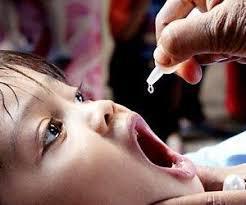 Poliomyelitis is highly infectious disease caused by poliovirus. It is also known as polio or infantile paralysis. The virus belongs to genus Enterovirus which is a type of single-stranded RNA virus. There are three serotypes of poliovirus: P1, P2 and P3 and development of immunity to one serotype does not produce significant immunity to the other serotypes. The virus is transmitted primarily via the fecal-oral route, by ingesting contaminated food or water and less commonly through oral-oral route. Those who are infected may spread the disease for up to 6 weeks even if no symptoms are present. Poliovirus colonizes the gastrointestinal tract, specifically intestine and oropharynx and after about a week, it invades local lymphoid tissue and enters bloodstream, and then may infect cells of the central nervous system. Replication of poliovirus in motor neurons of the anterior horn and brain stem results in destruction of cell and thus causes the typical manifestations of poliomyelitis. This is projected to favor a significant growth for polio vaccines market over the forecast period.Download PDF Brochure of Research Report @ https://www.coherentmarketinsights.com/insight/request-pdf/380Symptoms of Poliomyelitis:Polio mainly affects children under 5 years of age. Up to 70% of all the infections in children are without any symptoms and about 25-30% of infections in children causes’ nonspecific illness without clinical or laboratory evidence of central nervous system invasion. This has created a gesture for the organizations to focus on the vaccines options for making prophylactic approach towards the prevention of the disorder, which in turn is expected to fuel the polio vaccines market in the near future.Polio vaccines market relies on the fact that around 1% of polio cases can develop into paralytic polio which causes paralysis in the spinal cord (spinal polio), brainstem (bulbar polio), or both (bulbospinal polio).According to WHO, 1 in 200 infections leads to irreversible paralysis. Among those paralyzed, 5% to 10% die when their breathing muscles become immobilized. The statistics regarding the prevalence of the disorder is expected to be one of the crucial factor that is to fuel the market of polio vaccines.In a report, WHO has reported that Polio cases have decreased by over 99% since 1988, from an estimated 350 000 cases then, to 74 reported cases in 2015. The reduction is the result of the global effort to eradicate the disease. Of the 3 serotypes, P2 was eradicated in 1999 and number of cases of P3 has decreased significantly.Polio Vaccines Market - Global Key PlayersPlayers of polio vaccine market are: Merck & Co, Bibcol, Pfizer, Beijing Tiantan Biological, Bio-Med, Panacea Biotec Ltd, Adithya Vaccine Pharma, Sinovac Biotech Ltd, IPOLand Aventis Pasteur.Market scenario varies with change in continents and is expected to affect the polio vaccines market:There are two types of vaccine that protect against polio:• Inactivated poliovirus vaccine (IPV): given as an injection. • Oral poliovirus vaccine (OPV): given orallyOPV has not been used in the United States since 2000 but is still used in many parts of the world but, IPV is still available in US.Polio vaccines market is segmented on the basis of product and end user:Segmentation on the basis of product: • IPV • OPVSegmentation on the basis of end user: • Hospital • Clinics • Public Services • OthersAmerica has been declared polio free in 1994. In 2004, polio was declared to be eliminated from Australia, China and other 37 Pacific countries. Since 2011, there has been no cases of wild polio infections in India. This factor is projected to hinder the polio vaccines market in the near future.There are only 3 countries left in which wild polio infections still persist; Afghanistan, Nigeria, and Pakistan, which are somehow the reason for significant growth in the polio vaccines market in the near future.Indigenous wild poliovirus type 2 has not been detected since 1999. In 2015, the World Health Assembly agreed that all Member States which currently use OPV should prepare for the global withdrawal of the type 2 component of OPV in April 2016. According to WHO, member countries are required to introduce at least 1 dose of the IPV into routine immunization schedule.Grab Your Report at an Impressive Discount @ https://www.coherentmarketinsights.com/insight/request-discount/380About Coherent Market Insights:Coherent Market Insights is a prominent market research and consulting firm offering action-ready syndicated research reports, custom market analysis, consulting services, and competitive analysis through various recommendations related to emerging market trends, technologies, and potential absolute dollar opportunity.Contact Us:Mr. Shah Coherent Market Insights 1001 4th Ave, #3200 Seattle, WA 98154 Tel: +1-206-701-6702 Email: sales@coherentmarketinsights.com