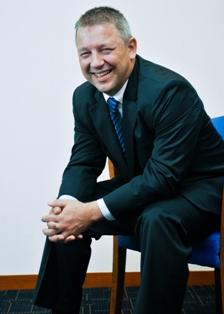 at-visions is pleased to announce Mr. Oliver Winzer as the CEO of at-visions Asia Pte Ltd. With more than 9 years experience in Asia Pacific as Regional Director IT of Amadeus Asia and MD of Optims Asia, Mr. Winzer is the ideal complement to the fast growing team of at-visions."We know and appreciate Oliver for years and are very happy that he brings his experience and industry know-how into this important role. Especially in such an important phase during expansion, his market knowledge and management experience gives us the security to provide the best advice to our customers and prospects "said Roman Kirisits, Owner & CEO of at-visions.And Mr. Oliver Winzer adds: "I've been working and living in Asia over 9 years and appreciate the region in all its diversity very much. ONEvision™ Hotel TV is a very impressive solution that has activated enormous interest in recent time. However, I was almost more impressed from the commitment that at-visions shows for the region. Under these conditions it is a great task to accompany the expansion of at-visions Asia and I am very much looking forward to it! "One of the first activities is the official opening of the new showroom to which all interested parties already are cordially invited.About at-visions: at-visions is an IT full-line provider with departments responsible for consulting, network engineering, virtualization and digital TV systems. The specific focus is on the tourism and hotel industry, in which the team of at-visions provides many years of international experience.Contact: at-visions Informationstechnologie GmbH Industriegebiet 507/1/2 7412 Wolfau T: +43 720 516200 F: +43 720 516212 contact@at-visions.com www.at-visions.com

11-30-2020 | Health & Medicine
Allied Market Research
Asia IVD Market
According to a new report published by Allied Market Research, the Asia Pacific In-vitro diagnostics market was valued at $12.9 billion in 2015, and is expected to reach $19.0 billion registering a CAGR of 5.6% during 2016 to 2022. The report offers a detailed analysis of the key segments, top investment pockets, changing dynamics, market size & estimations, and competitive scenario. Download Free Sample Report @ https://www.alliedmarketresearch.com/request-sample/1256 The Asia-Pacific IVD market is
03-21-2019 | Business, Economy, Finances, B …
RAMPF Group
RAMPF Korea – Producing in Asia for Asia
Joint Venture for the Asian markets – The international RAMPF Group has realigned the cooperation with its long-standing partner Orient Dosiertechnik from Korea with the founding of RAMPF Korea Co., Ltd. The new company based in Hwaseong City is developing and producing mixing and dispensing systems specifically for the Asian markets. Within the framework of the new joint venture based in Hwaseong City, mixing and dispensing systems are being developed and
01-23-2019 | Business, Economy, Finances, B …
International Property Media
LIXIL Asia Presents Asia Pacific Property Awards
Through its power brands GROHE and American Standard, LIXIL Asia signs a three-year deal to become the Headline Sponsor of the Asia Pacific Property Awards from 2019 until 2022. 23rd January 2019: The International Property Awards, first established in 1993, are open to residential and commercial property professionals from around the globe. They celebrate the highest levels of achievement by companies operating within the architecture, interior design, real estate and property
12-12-2014 | IT, New Media & Software
Model Engineering Solutions GmbH
MES: Expansion in Asia
Berlin, November 24, 2014: Model Engineering Solutions (MES), the Berlin-based specialist for model-based software development, has significantly expanded its business in Asia. In recent years, MES has built up a network of local partners in Japan, Korea, China, and India in order to benefit from the growing market and increasing interest in model-based development and ISO 26262 in Asia. Asia: Driving force in the automotive industry The automotive industry continues
11-03-2011 | Advertising, Media Consulting, …
Clarion Events Asia
Undersea Defence Technology Asia, UDT Asia 2011
Latest Military Diving Technologies featured in UDT Asia Equipping Asia’s navies with the latest diving technology for asymmetric warfare and operations SINGAPORE, 17 October 2011 - Naval diving and underwater special operations is a field that is seeing increased attention and investment amongst navies in Asia. Units such as the Indonesian Navy‟s KOPASKA, the Republic of Singapore Navy‟s Naval Diving Unit (NDU), the Royal Malaysian Navy‟s PASKAL are increasingly utilising specialised equipment for conducting
06-10-2011 | Politics, Law & Society
Clarion Events Asia
UDT Asia 2011
Clarion Events hosts the Undersea Defence Technology (UDT) Asia 2011 conference and exhibition to bring senior naval and industry personnel together to cover underwater developments in the region Singapore, May 30 – Clarion Events is hosting UDT Asia on 30 November – 1 December 2011. The event brings together the undersea defence community in Asia, featuring top regional naval speakers, who will be addressing the latest underwater requirements for Asian navies. According
Comments about openPR
We publish our press releases on openPR.de because we like people who are "open" - just like us.
Frank Obels, CEO, INCONET - Informationssysteme, Communication und Netzwerkberatung GmbH