Press release from: American Board of Accredited Certifications (ABAC) 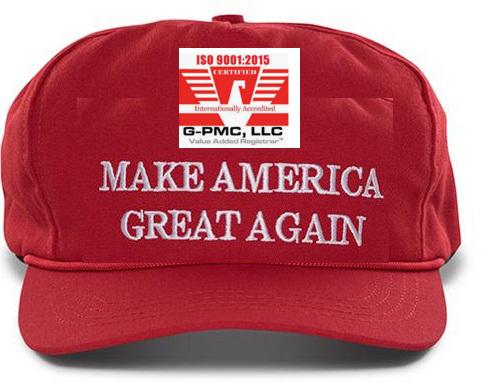 Guberman-PMC is the leading independent quality registrar in the world. A patriotic company, it's CEO has been a voice against hostile to America foreign ownership, membership, or clear as day ties of many other registrars in the industry. Guberman-PMC is a #MAGA company if there ever was one.New York, NY, USA, January 02, 2019 -- Being passionate about quality and helping businesses meet their quality goals and certification needs seems to be a natural space for a very patriotic businessman to find himself a leader in. This sums up the very driven Daryl Guberman (http://dguberman.com), quality expert, and CEO of Guberman-PMC, the #1 American-based quality registrar bar none. With the quality registrar industry under siege by a number of huge international quality registrars tied to nations hostile to America, Guberman has been working hard to educate businesses and the general public about these serious concerns. His compelling and evidence backed views can be heard on his quite active YouTube channel, where he recently released a new video “Why G-PMC is the Only ISO Registrar Supporting #MAGA”. (https://youtu.be/7H7pEl3rRuI)“It seems like even people in our own United States government aren't aware of things like the IAF quality registrar being led by a Chinese National and their working with Lockheed Martin who the facts are clear has been successfully attacked by Chinese hackers,” commented Guberman. “Or ANAB, another major quality registrar association having members and links to the most anti-Israel countries and anti-American countries on Earth. If I can be a voice against this madness I certainly will.”Part of Guberman and Guberman-PMC's open stance as the country's only quality registrar who endorses the idea of the “Make American Great Again” movement has been his recent announcement of a limited supply offer of 100% free #MAGA hats to anyone who calls or sends an email voicing support for #MAGA. And free means free, Guberman is even paying for the shipping.In the video, the energetic and charismatic business leader explains why it is necessary to support President Trump in his efforts to get America back on course and then moving forward, which is what #MAGA represents. To Guberman, and many others, this would include businesses, especially those with government contracts avoiding contaminating themselves through contact with the IAF or ANAB, and instead choose to work with an American-based, owned, and operated, deeply experienced firm like Guberman-PMC.Far from focused on the negative Daryl Guberman has shown a way for ISO-certification needing companies to avoid these traps, easily and affordably. It's almost certain as public knowledge of the ties between IAF, ANAB, and others to China, North Korea, Pakistan, and Iran rises many companies who don't make the switch could be left with severely damaged reputations, with no way of saying “we didn't know”, due largely to the work of Guberman and Guberman-PMC.Business owners are being given a clear choice to work with a pro-American ISO quality registrar or not. Hopefully, many will make the decision to change their ways and start to help “Make America Great Again”.For more information and the latest from Daryl Guberman visit http://dguberman.com.Press & Media Contact: ABAC Headquarters (US) 41 Madison Avenue, 31st Floor, Manhattan, New York, NY 10010-2202 - USA +1 212-726-2320 info@aboac.org http://dguberman.com

More Releases from American Board of Accredited Certifications (ABAC)

10-23-2020 | Industry, Real Estate & Constr …
American Board of Accredited Certifications (ABAC)
Daryl Guberman Exposes ANAB Corruption in Recent Crime Lab Certification Scheme …
With most American eyeing China with much-deserved suspicion, the Quality Certification world finds itself very much in the clutches of Chinese state actors. With a series of failures becoming known to the public, experts like Daryl Guberman are making sure the nation knows what is happening and why. New York, NY - USA | October 23, 2020 -- Quality Accreditation bodies are operating under head shaking conditions with shocking ties and
10-01-2020 | Industry, Real Estate & Constr …
American Board of Accredited Certifications (ABAC)
Daryl Guberman Makes Powerful Video Exposing ANSI's Need for Impartial Oversight …
The quality organization ANSI is facing many credibility and even loyalty issues and questions. Authority in the same space, Quality Expert Daryl Guberman has presented a solution to these concerns in a recent YouTube video. New York, NY - USA | October 01, 2020 -- When companies trust an organization to look at their quality standards there is an expectation of transparency, trustworthiness, and professionalism. Also for American companies, in this
08-27-2020 | Industry, Real Estate & Constr …
American Board of Accredited Certifications (ABAC)
Daryl Guberman Reveals Details About Texas Company Overseen By China Being Told …
China’s influence over American businesses is extremely disturbing. Daryl Guberman of Guberman-PMC has led the way in educating about this vitally important issue. New York, NY - USA | August 27, 2020 -- China works its influence in the United States in extremely diverse ways. One which many are not aware of is by controlling ISO registrars by inserting Chinese nationals in top positions. Fortunately, Daryl Guberman (http://dguberman.com) and Guberman-PMC, leaders
07-03-2020 | Industry, Real Estate & Constr …
American Board of Accredited Certifications (ABAC)
Pro-Americans Backing Guberman-PMC In Patriotic Fight For Quality Certification
Freedom loving U.S. business owners nationwide demand the right to choose their accreditation body for ISO certification. Washington, DC - USA | July 03, 2020 -- As the 4th of July approaches and Americans prepare for their annual family cookout in celebration of American independence, there's another fight for liberation that's taking place within the ISO certification community that has resulted in heated debates online, and discussions among corporate leaders inside