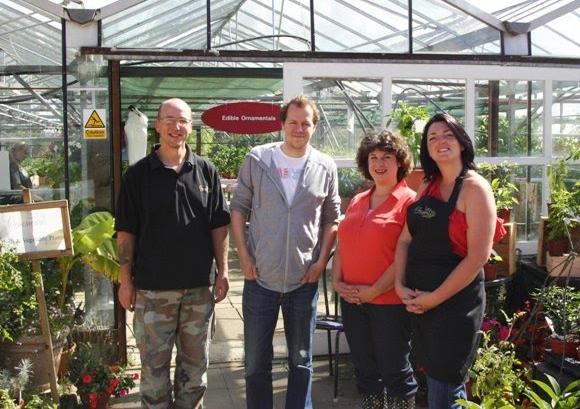 Radio presenter, Daily Mail columnist, food author and general Good Food aficionado Tom Parker Bowles couldn’t resist visiting Bedford’s chilli specialist Edible Ornamentals. Tom had invited Joanna Plumb to be a guest on his Sunday afternoon Food and Drink programme on LBC, and he was so impressed with Joanna’s enthusiasm and passion for fresh vegetables, he had to visit the nursery and sample the freshly prepared delights of the Edible Kitchen for himself.“I’m a complete chilli freak; from the mellow Poblano and Ancho right up to the insane Ghost and Dorset Naga.. Chillies are the greatest of all fruits, and far more sinned against than sinning.” Said TomAccording to Tom, The Duchess of Cornwall, and her husband are also keen chilli fans. “Prince Charles and my mother are both chilli heads,” added Tom. “They grow 14 different varieties of chillies in the greenhouses at Highgrove. It may not be as many as the 40 odd varieties that Joanna grows, but they can pick them fresh which is the real key to getting the best flavour.”After sampling Edible Kitchen’s beetroot and chocolate cake served with chilli jelly and ice cream, Tom commented, “In the olden days, it was a tradition for monks and royalty to be given chilli and chocolate on their death bed as a final treat before they passed on.” Fortunately Tom not only enjoyed his treat, but also lived to tell the tale.More about Tom Parker Bowles Tom Parker Bowles is a food writer with a weekly column in The Mail On Sunday's Live magazine, and he is also a contributing editor to GQ magazine. He co-hosts Market Kitchen on UKTV Food and regularly contributes to other TV food shows (Gordon Ramsay’s F Word, The Big Food Fight Quiz). He presents LBC’s Food and drink show every Sunday afternoon and is the author of three books about food: More about Edible Ornamentals Edible Ornamentals is Bedfordshire’s leading producer of high quality chillies and a range of fresh vegetables that visitors can pick straight from the plant. As well as local farmer’s markets they also supply fresh chillies to Morrison’s stores in Eastern England via the ‘From My Farm’ brand as well as Fortnum and Masons and leading London restaurants. Joanna’s special chilli sauces are available from the nursery and local Waitrose stores.Edible Ornamentals has featured in the national daily press, The Economist and leading national trade publications The Grocer and Fresh Produce Journal. Joanna has featured as a chilli expert on BBC’s 3 Counties Radio, Radio 2’s ‘Chris Evans Show’, and Radio 4’s ‘You and Yours’ and has appeared in several TV programmes including BBC TV’s ‘Ready Steady Cook’, BBC 2’s Economy Gastronomy and Good Food Channel’s ‘Market Kitchen’.In 2009, Edible Ornamentals won the Best Effective Promotional Campaign category in the 2010 Conquest Business Awards, and was awarded the accolade of ‘Local Food Hero for East Anglia by Good Food Channel’s Market Kitchen.In 2010, Edible Ornamentals also partnered with Virgin and offers special half day Chilli Experience days.As well as fresh chillies and chilli plants, Edible Ornamentals also grow and sell a range of fresh vegetables, including tomatoes, aubergines, lettuce, Swiss chard, and sweet corn, which visitors can pick straight from the plantFor further information about Edible Ornamentals Company visit www.edibleornamentals.co.ukColin Caldicott, Ultimedia Public Relations 29a Market Square Biggleswade Beds SG18 8AQTel: 01767 601470 E-mail: colin@ultimediapr.co.uk

02-20-2013 | Leisure, Entertainment, Miscel …
Edible Ornamentals
Bedfordshire’ Chilli specialist awarded £40,000 grant from BRCC to develop ne …
Bedfordshire’s celebrated chilli specialists, Joanna and Shawn Plumb of Edible Ornamentals, have been awarded a major grant in excess of £40,000 to create an Edible Kitchen. The grant was awarded through the Rural Development Programme for England (RDPE) by the Greensand Ridge Local Action Group which is managed locally by Bedfordshire Rural Communities Charity (BRCC). This new facility will open in early May to provide refreshments and light lunches
09-13-2012 | Fashion, Lifestyle, Trends
Edible Ornamentals
Chilli Expert features in Gordon Ramsay’s new TV Cookery Programme
Chilli specialist Joanna Plumb hit national television screens once again this week when Edible Ornamentals was featured on Gordon Ramsay’s new ‘Ultimate Cookery Course’ programme on Channel 4. Gordon Ramsay is a great fan of chillies and the programme televised on Wednesday evening looked at ways chilli can add a real zest to a range of dishes. The programme also looked at growing and storing chillies to get the maximum
02-24-2011 | Leisure, Entertainment, Miscel …
Edible Ornamentals
Edible Ornamentals wins Grower of the Year Award
Bedfordshire’s chilli guru, Joanna Plumb has just received yet another accolade as ‘Grower of the Year 2011’, when her Chawston based nursery Edible Ornamentals won the award for the best Trade Marketing Campaign of the Year. Over 500 professional growers from across the UK attended the award ceremony which was held at London’s Lancaster Hotel and hosted by TV celebrity Paul Ross. Arranged by Horticulture Week, and sponsored by national
09-22-2010 | Fashion, Lifestyle, Trends
Edible Ornamentals
Bedfordshire Chilli Growers hand-picked by Harrods
Chawston-based specialist chilli growers, Edible Ornamentals have been chosen to supply their seasonal range of chillies as part of Harrods Festival of British Foods Fortnight, which will be featured at their Food Halls and Restaurants in Knightsbridge until 3rd October. Chef Valentine Warner, who is best known for his television programme “What to Eat Now” is partnering Harrods for the event. He is renowned as a champion of small, British,

09-21-2018 | Arts & Culture
PR for RETROSPECT
“Retrospect” by Tom Tottis is published
ISBN #978-1787197305 “Retrospect” by Tom Tottis is published A family saga spanning three generations from Budapest in the 1920s to London in the 1990s About the Book: Based on a true life story, RETROSPECT is about human fortitude, chronicling the life of a Hungarian family, eventually reduced to just mother and son, and their struggle during Nazism in the early 1940s, followed by tyrannical Communism, the Hungarian Uprising in 1956, and the aftermath. From Budapest
07-09-2018 | Business, Economy, Finances, B …
ReportsWeb
Automotive Telematics Market 2018-2022 Global Key Companies - Trakm8 Holdings, T …
Telematics is the field of science in which the long-distance transmission and communication between computer-based information is arranged. In simple terms, receiving, storing and sending of computer based information is performed with the help of telematics system. The technology of telematics is generally used in different types of vehicles. Automotive telematics is the technology that deals in ensuring the safety of the car and its passengers by providing diversified computer-information based
05-24-2016 | Advertising, Media Consulting, …
Amscreen
AMSCREEN TERMINATES AGREEMENT WITH TOM GODDARD’S DIGICOM
Amscreen regretfully announces that it has today terminated its sales agency agreement with Digicom Out Of Home Digital Media Limited (“Digicom”) and temporarily suspended the advertising service on its network of forecourt screens. This follows the filing of a Notice of Intention to Appoint an Administrator by Digicom on Friday 13th May 2016. We were informed by Digicom shortly after this that payments due to Amscreen under the terms
02-05-2013 | IT, New Media & Software
Omniplex Ltd
Tom Kuhlmann explains ‘interactivity’ at Omniplex seminar
Tom Kuhlmann, one of the world’s best known e-learning designers and currently number three in the ‘World’ list of the Top Ten Movers and Shakers in corporate online learning, discussed the ‘what, when and how of interactivity’ with an invited audience at The Cellar at Vinopolis, on London’s south bank, at the end of January. Hosted by Omniplex, an official certified Articulate partner and an Articulate Centre of Excellence, as a
04-22-2011 | Arts & Culture
Aurel Scheibler / ScheiblerMitte
Tom Chamberlain : Some Other Time
Tom Chamberlain Some Other Time Opening: 29 April 2011, 6 - 9 pm Duration: 30 April – 24 June 2011 Location: Aurel Scheibler / ScheiblerMitte Charlottenstraße 2 (in the Alley) 10969 Berlin The British artist Tom Chamberlain (*1973) engages the simplest of artistic means to achieve an unusually high degree of visual complexity
05-16-2008 | Industry, Real Estate & Constr …
PMForum, Inc.
Tom Taylor named PM Ambassador™ in UK
APM Fellow Tom Taylor joins the PM Ambassadors™ Speakers Bureau in England Dallas, Texas — PMForum, Inc. is pleased to announce that Tom Taylor, former Chairman and a Fellow of the Association for Project Management (APM) in the UK, has joined the PM AmbassadorsTM Speakers Bureau. Based in London and with over 30 years of front-line project management experience, Tom advises organizations and speaks on project management throughout the UK.
Comments about openPR
We publish our press releases on openPR.de because we like people who are "open" - just like us.
Frank Obels, CEO, INCONET - Informationssysteme, Communication und Netzwerkberatung GmbH