at-visions is expanding to Asia 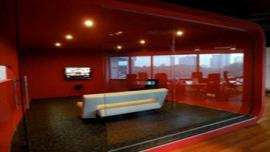 In reaction to the enormous interest in the ONEvision™ Hotel IPTV platform at-visions Asia Pte Ltd based in Singapore was founded. The Asia Pacific region is a very dynamic and emerging market for first class and luxury hotel business. An on-site organisation was indispensable given the fact of the quantity and quality of inquiries received. “The need of modern In-Room technology exists definitely to a great extent and ONEvision™ can execute to its strength in particular in this highly competitive market environment”, Mr. Roman Kirisits, Owner & CEO of at-visions seizes the emerging chances. And adds: “Singapore as the centre for the Asia Pacific region offers the best requirements for the first phase of market penetration and establishment. Further offices in countries are already planned.” Investment has been an important condition to enter the Asian market. People have been trained intensively over months and a support infrastructure has been set up. A modern, spacious office with a state of the art showroom offers the ideal place to present ONEvision™ in appropriate atmosphere."It was very important to establish a strong on-site organisation before implementing the first projects. Now we are pleased to offer our prospects as well as customers superior service – from initial presentation to after sales support and even a complete test environment for new content and technology to be considered and even implemented ", said Roman Kirisits.About at-visions: at-visions is an IT full-line provider with departments responsible for consulting, network engineering, virtualization and digital TV systems. The specific focus is on the tourism and hotel industry, in which the team of at-visions provides many years of international experience.at-visions Informationstechnologie GmbH Industriegebiet 507/1/2 7412 Wolfau T: +43 720 516200 F: +43 720 516212 contact@at-visions.com www.at-visions.com

05-26-2020 | IT, New Media & Software
suria international
Magento development company singapore
Suria International, a leading Magento web development company An online shop is the need of the hour in the age of eCommerce and mCommerce. Advancing technology has introduced several platforms to build feature-rich online stores, but Magento has remained a preferred choice of many online retailers for years. High scalability, broad system support, and result-oriented adaptability have made Magento eCommerce development popular worldwide. Magento, with its three variants- Magento Community Edition, Magento
02-26-2018 | Business, Economy, Finances, B …
Vinsys IT services (I) PVT LTD
ITIL Singapore
ITIL Singapore Certification Training at Vinsys. Get ITIL Training with EXIN & PeopleCert Accredited ITIL Certification Training with IT Tactic of Business Vision ITIL Singapore. ITIL Foundation Singapore is the most widely recognized entrance-level ITIL certification for IT professionals. IT departments need qualified specialists who can carry effective IT services. This ITIL Singapore training will show you the ITIL Singapore services lifecycle, how lifecycle steps are linked, processes elaborate, and finest
02-22-2018 | Advertising, Media Consulting, …
ReportsWeb
Baby Food in Singapore
The Singaporean baby food market is small in terms of total size, but highly developed in terms of per capita consumption. The fluctuations in the number of births have a clear effect on sales. In value terms, almost 90% of the market consists of baby milks, with the bulk of the remainder split between baby meals/drinks and baby cereals in 2015. In volume terms, milk accounts for 76.9%, wet meals
09-22-2017 | Fashion, Lifestyle, Trends
Orbis Research
Jewellery Market in Singapore
Summary This report helps to analyze competitive developments such as joint ventures, strategic alliances, mergers and acquisitions, new product developments, and research and developments in the Jewellery in Singapore Description Consumers in Singapore are becoming more adventurous and are increasingly opting for exclusive and unique designs to differentiate themselves. For example, there is growing demand for non-diamond engagement rings in Singapore, with home-grown label Carrie K witnessing a 15% boost in sales for
03-03-2016 | Business, Economy, Finances, B …
WBLCA
WBLCA & Technology Seminar Singapore
Just as technology has reshaped how individuals communicate and how organizations do business, it also having a profound impact on the practice of law. Technological developments are affecting management strategies in corporate legal departments, and changing how legal services are delivered. Venue: Singapore (Hotel Mandarin) Date: 15 May 2016 Registration: 8.15am to 9.00am (Singapore Time) Event: 9.00am to 5.00pm WBLCA & Technology Seminar examines both the: (a) legal challenges (b) opportunities
12-12-2014 | IT, New Media & Software
Avolution
Avolution Opens Singapore Office
Avolution, developer and supplier of software solutions for enterprise modeling, planning and IT strategy, announced today that it has opened a South East Asian office in Singapore. The announcement follows strong growth throughout 2014, which is projected to increase further over the next twelve months. “South East Asia continues to be a strong region for Avolution,” said Mark Denford, Asia-Pacific Manager, “and Singapore is at the centre of this growth. Singaporean government
Comments about openPR
We publish our press releases on openPR.de because we like people who are "open" - just like us.
Frank Obels, CEO, INCONET - Informationssysteme, Communication und Netzwerkberatung GmbH