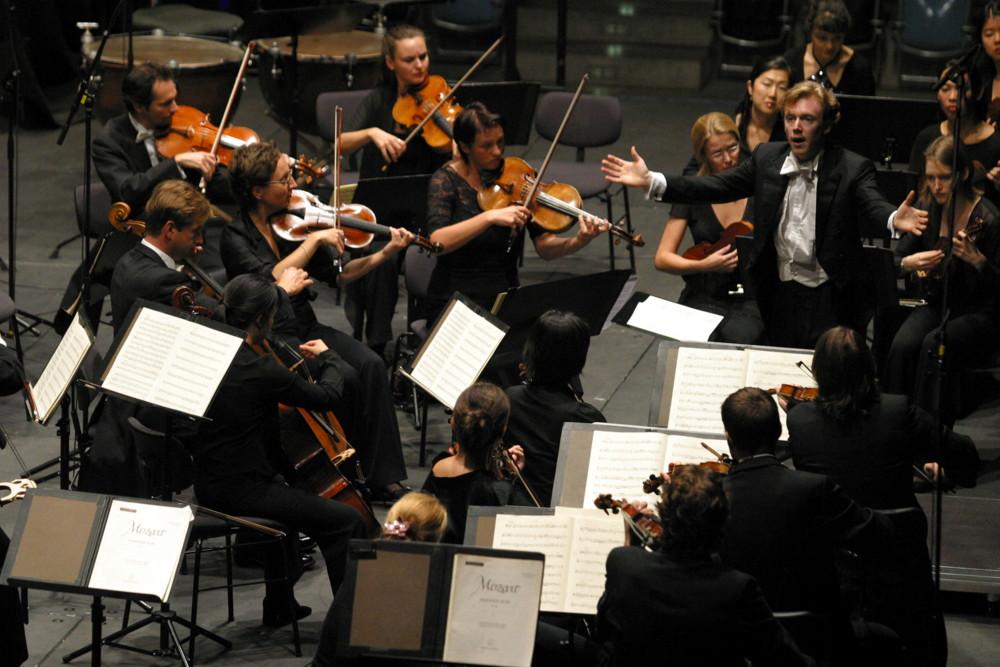 The Mahler Chamber Orchestra starts its anniversary year 2007 with its annual concert series in Salzburg. Orchestra in residence at the Mozartwoche since 2005, this year the orchestra presents a programme that focuses on works by Mozart, but also includes contemporary composers such as Heinz Holliger and György Ligeti. Daniel Harding, MCO music director for almost four years, conducts the first concert, a matinee of works by Mozart, Ligeti and Haydn. Stefan Dohr, solo hornist of the Berliner Philharmoniker, appears as soloist. This concert will also be performed in Torino on 7 February. Although the festival Sintonie, where the MCO has appeared regularly since 2003, will not take place this year, the orchestra was invited to play one concert at the Auditorium Giovanni Agnelli. The second concert will be conducted by Robin Ticciati. The young british conductor performs for the very first time with the MCO, as does soloist Jonathan Biss. Alongside Mozart’s piano concerto no. 3, the orchestra plays Webern’s Five Movements and Haydn’s Symphony no. 101. The third concert in Salzburg is also a special event, as it features Heinz Holliger in a “triple function”: he will conduct a programme that includes his own composition, Ostinato funebre for small orchestra, and will perform as solo oboist in Mozart’s oboe concerto KV 314. A day later, on 5 February, this programme will be repeated at the Teatro Nuovo Giovanni da Udine. The Mahler Chamber Orchestra celebrates its 10th anniversary in 2007. The orchestra was founded in 1997 on the initiative of Claudio Abbado and a group of musicians from the Gustav Mahler Youth Orchestra. The combined principles of artistic curiosity and the broadest possible spectrum of repertoire, both at the highest possible musical level, guided the ambitious ensemble in its founding and continue to shape its work today. The first concert of the MCO took place on 21 November 1997 in Landshut. MCO music director Daniel Harding will conduct the anniversary concert on 31 October in Ferrara. 29 January 2007, 11h00, Salzburg, Mozartwoche, Mozarteum, Großer Saal 7 February 2007, 20h30, Torino, Associazione Lingotto Musica, Auditorium Giovanni Agnelli Mozart Horn concerto no. 3 in E-flat major KV 447 Ligeti Hamburgisches Konzert Haydn Symphony no. 90 in C major Hob. 1:90 Conductor Daniel Harding Horn Stefan Dohr 1 February 2007, 19h30, Salzburg, Mozartwoche, Mozarteum, Großer Saal Webern Five Movements op. 5 Mozart Piano concerto no. 17 in G major KV 453 Haydn Symphony no. 101 in D major Hob. I:101 “Die Uhr” Conductor Robin Ticciati Piano Jonathan Biss 4 February 2007, 19h30, Salzburg, Mozartwoche, Mozarteum, Großer Saal 5 February 2007, 20h45, Udine, Teatro Nuovo Giovanni da Udine Mozart Maurerische Trauermusik in C minor KV 477 Holliger Ostinato funebre from Exercises on Scardanelli for small orchestra Mozart Oboe concerto in C major KV 314 Haydn Symphony no. 98 in B-flat major Hob. I:98 Conductor Heinz Holliger Oboe Heinz Holliger The Mahler Chamber Orchestra was founded in 1997 on the initiative of Claudio Abbado. The ensemble’s repertoire reaches from baroque to contemporary and includes everything from chamber music to symphonic programming, from operatic standards to world premieres. Daniel Harding became music director in summer 2003 and conducts a large percentage of the orchestra’s 70-80 concerts and opera performances each year. Projects with noted specialists in particular techniques or repertoire also make up an important element of the orchestra’s program, strengthening its reputation as a multi-faceted ensemble. The core of the MCO is made up of approximately 50 musicians of 19 different nationalities. The Mahler Chamber Orchestra is orchestra-in-residence in Aix-en-Provence, Ferrara, Toblach, Landshut, and at the Mozartwoche Salzburg. Long-term contracts also connect the orchestra to the Sintonie Festival in Torino and the Lucerne Festival. In its nine years, the MCO has recorded several prize-winning CDs. Discs recorded under the direction of Daniel Harding include among others: Don Giovanni and The Turn of the Screw (recipient of several awards, including the Choc de l’ année 2002). The live recording of Beethoven’s 2nd and 3rd piano concertos with Claudio Abbado and Martha Argerich was honoured with a Grammy Award. Andrea Kerner Public Relations Mahler Chamber Orchestra e.V. Heinrich-Roller-Str. 16-17 10405 Berlin Phone 0049 30 41 71 79 21 Fax 0049 30 41 71 79 29 a.kerner@mahler-chamber.de www.mahler-chamber.de

11-03-2017 | Arts & Culture
Rc Record Classic Label
Cimarosa and Perugini: Echoes of Mozart in "Il Matrimonio Segreto" release
Consider the stamina shown just over 230 years ago in Vienna, when after listening to a three-hour opera (presumably plus a pause between the two acts) Leopold II ordered the work to be repeated in its entirety after an interval for supper. Assuming at least an hour for this (probably longer), the evening’s entertainment must have extended over about nine hours – almost awe-inspiring in this sound-bite era of ours.
08-15-2017 | Arts & Culture
Rc Record Classic Label
A new CD release: Symphonies by Leopold Mozart
The rehabilitation of Mozart père, as man, has been going on for some time. His presentation in many popular accounts of the life of Wolfgang Amadeus, as callously exploitative and autocratic, as embittered by jealousy of his son’s genius, has been at the very least tempered, if not entirely refuted, by modern scholarship. We are in a better position, now, to recognise why, at the time of his death, his
11-12-2012 | Advertising, Media Consulting, …
the Adler Network, inc.
Mozart Café Opens First Palm Beach County Location at Fountains Center in Boca …
BOCA RATON, Fla. – Mozart Café has opened its first Palm Beach County location within the Fountains Center office and retail park in central Boca Raton. Owner Shimi Avni, with his business development consultant Mike Zikri, have positioned the Boca Mozart Café as their flagship restaurant. “We offer a Vegetarian, Pescetarian and Dairy Kosher menu featuring the freshest and best ingredients available, while also promoting healthy nutrition,” Zikri explained. “Our
06-11-2012 | IT, New Media & Software
AwoX
AwoX Mozart II powering Aperion ARIS
June 4, 2012 – Palo Alto, California, On May 8, 2012 Aperion Audio announced the ARIS™ Wireless Speaker, the first all-in-one “Networked Speaker” designed to work with both Windows 7- and upcoming Windows 8-based PCs. Awox has worked in close cooperation with Aperion to develop a new form factor of the AwoX Mozart II module that can be “slotted-in” to the ARIS speaker. This modular card provides the
08-04-2011 | Arts & Culture
Mag. Bettina Ruprechter
The DVD - W.A. Mozart - Don Giovanni – Live from the quarry in St. Margarethen …
DVD release of the new production of the famous St. Margarethen Opera Festival in Austria The quarry in St. Margarethen is one of Europes most beautiful and astonishing open air arenas and it is also the breathtaking scenery for the yearly opera festival in one of Austrias most beautiful regions. The fusion between art and nature creates an incredible ambiance. This year for the very first time it is the
01-13-2010 | Arts & Culture
Mahler Chamber Orchestra e.V.
The Mahler Chamber Orchestra performs works by Mozart, Kurtág and Beethoven und …
Berlin, 13 January 2010 – The Mahler Chamber Orchestra (MCO) returns to the Salzburg Mozart Week at the end of January, where it was orchestra in residence from 2005 to 2007. Once again, the festival’s main focus, alongside the music of Wolfgang Amadeus Mozart, is contemporary music: György Kurtág, one of the most important composers of our time, has been invited to help design programmes in which his music encounters
Comments about openPR
I can't but agree to the positive statements about your portal: easy to use, clear layout, very good search function, and quick editing!
Jens O'Brien, Borgmeier Media Communication