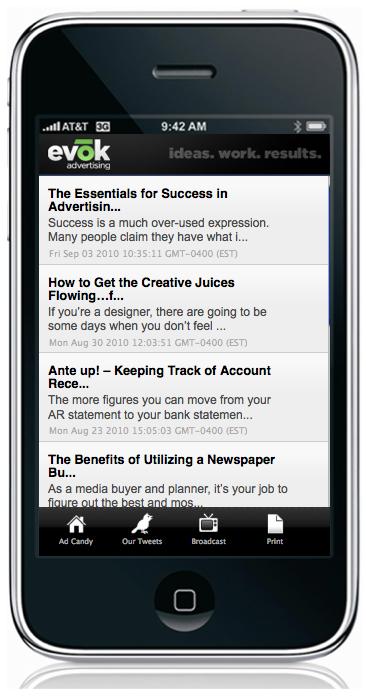 LAKE MARY, Fla. (September 15, 2010) – Many local businesses in today’s economy have found themselves trying to stretch their advertising dollars even further to bring in new customers. EVOK Advertising of Lake Mary, a creative ad agency and registered Apple developer, has created a new iPhone app for small, mid-sized and stage-2 economic development companies that are struggling to produce an advertising campaign with measurable results.According to Orlando Inc.’s Executive Vice President John Ashworth (Orlando Regional Chamber of Commerce), “To understand our economy and how to fuel it, we need to note the impact of growth-oriented businesses in Orlando. Currently, 93 percent of Central Florida companies have nine employees or fewer, and make up 44 percent of the jobs. As it is our mission to Connect Entrepreneurs to Success, I believe EVOK’s iPhone app is not only useful, but is right on target with the businesses that need the most help.” Released today, the free social media application, dubbed “Ad Candy” in the Apple iTunes store was derived from the agency’s blog, Free Ad Candy, which was recently nominated as National Blog of the Month by Wordpress. The educational business application provides detailed ad industry insights, tactics, concepts and strategies, along with real-world applications and case studies to help companies maximize return on their advertising investment.Composed of four distinct areas, the app features a white paper section tabbed “Ad Candy.” The whitepapers within the section are added weekly by EVOK’s staff, each team member focusing on their area of expertise in a round-robin rotation.Another tab within the iPhone app links the user to EVOK’s Twitter feed, where updates are posted throughout the day from the development team’s CEO, Larry Meador, a nationally-recognized emerging media specialist and member of the BPA Interactive Advisory Board. The Twitter feed links to Twitter.com/evoklarry, which has more than 36,000 followers and is the most followed advertising agency in Central Florida and one of the top followed ad agency Twitter accounts in the US.The other two tabs of the app serve as a portal to transport users to the core of of the industry, showcasing the agency’s print ads and TV spots. These invaluable sections give business owners and marketers and inside look into the development of both TV commercials and print ads. In this section, users learn why a TV commercial was filmed in HD versus SD, or why a copywriter chose a particular headline over another, and why and how it was placed in relation to imagery or specific calls to action within an ad. Both the TV spots and the print ads are RSS fed from EVOK’s YouTube and Flickr social media sites, to offer users a seamless integration of information and EVOK the ability to update the app as new work is produced.Since a large portion of EVOK’s work has been created for clients in the Central Florida market, such as Trustco Bank, Orange County Public Schools and Workforce Central Florida, downloading the app not only teaches users what works in advertising – but also teaches what works here – in Central Florida. ###Located in Lake Mary and co-founded by Scott Disbennett and Larry Meador, EVOK is a team of individuals who together capitalize on years of experience working on both the client and agency sides of the industry. With extensive and diverse capabilities, EVOK Advertising is equipped to provide a high level of service to their clients in all key areas of advertising, public relations, marketing and visual communications.Jennifer Johnstone 1025 Greenwood Blvd. Ste. 175 Lake Mary, FL 32746

10-28-2010 | Advertising, Media Consulting, …
EVOK Advertising
Evok Wins Four HBA 2010 Major Achievement Awards
LAKE MARY, Fla. (October 26, 2010) – The Home Builders Association of Metro Orlando recognized evok advertising for their work over the past year with four advertising and promotions awards, including the Grand Award, at the 2010 Major Achievement Awards. With over 15 judges from around the country, representing California, Minnesota, North Carolina, South Carolina and Texas, The Home Builders Association of Metro Orlando (HBA) honored evok advertising with awards for
07-22-2010 | Advertising, Media Consulting, …
EVOK Advertising
Ad Agency Uses the Art of Social Media to Gain New Business
LAKE MARY, Fla. (July 20, 2010) – In today’s economy, businesses are faced with the overwhelming challenge to find innovative ways to secure new clients, while competing with others who are trying to do the same. To win the battle, many companies are turning to social media to energize new business initiatives. EVOK Advertising is not only encouraging clients to use social media to its full potential, but also using
06-30-2010 | Advertising, Media Consulting, …
EVOK Advertising
Locally Created National Commercial Wins a Telly Award
LAKE MARY, Fla. (June 29, 2010) – EVOK Advertising and Vistamax Productions are celebrating their winning of a 2010 Telly award for the creation and production of the Sta-Max Plus television spot. The national male-enhancement commercial was created, filmed and edited within the state of Florida and utilized only local talent. Vistamax Productions, of Tampa, filmed, edited and produced the spot, while EVOK of Lake Mary was responsible for the strategic
06-22-2010 | Advertising, Media Consulting, …
EVOK Advertising
EVOK Advertising Hires Copywriter to Join their Creative Department as it Gains …
LAKE MARY, Fla., (June 21, 2010) – Earlier this month, it was announced that EVOK Advertising hired three new team members – now that number increases yet again. Today, EVOK announces Lawrence Werner as their new creative copywriter. Throughout his career as a strategic copywriter and an assistant creative director, Werner worked for industry standouts such as J. Walter Thompson, Chiat Day and Ogilvy & Mather, with clients ranging from Time