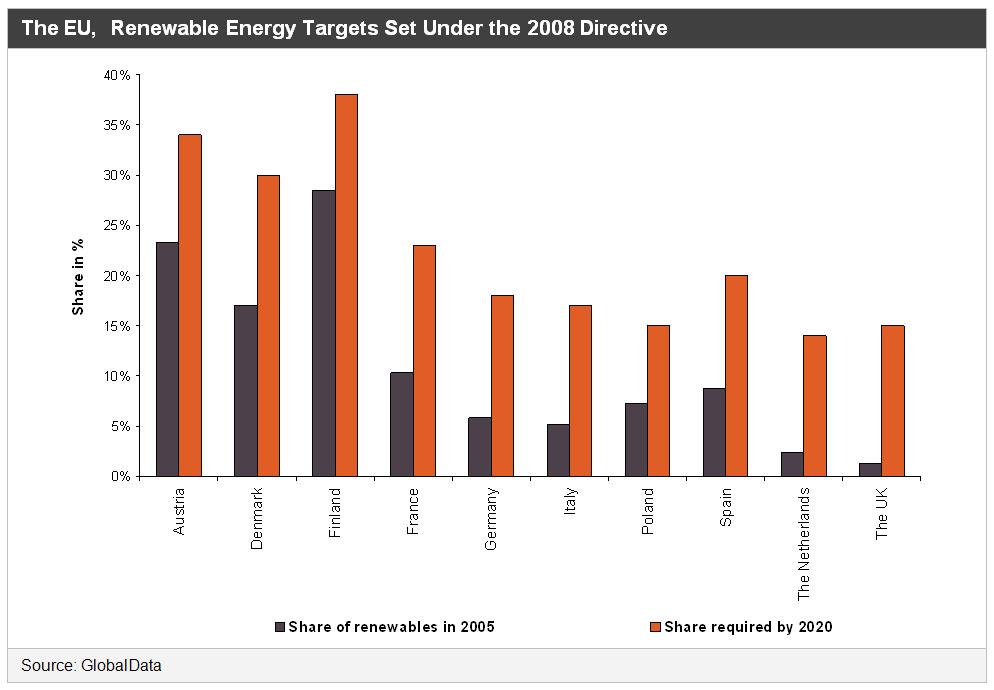 The EU, Renewable Energy Targets Set Under the 2008 Directive

GlobalData’s new report Europe Renewable Energy Policy Handbook 2010 provides an in-depth analysis of the renewable policy initiatives in the European Union (EU) and the key countries in terms of strength of policy implementation. The report provides trends and information on renewable energy policies in Europe and analyzes some of the driving forces for the renewable energy sector. It details the key policy instruments adopted by the governments in European countries and analyzes the different forms of incentives and subsidies provided for the development of the renewable energy equipment market. The report also provides information on key countries in Europe that are investing in renewable energy. The report also includes information on the renewable energy initiatives and legislative frameworks which are driving the renewable energy equipment market in Europe. Various financial instruments such as tax reforms, subsidies and preferential loans for the development of renewable energy sector is included in the report. The report also analyzes the impact of market instruments such as feed-in-tariffs on renewable energy sector. The EU’s New Directive to Promote Renewables Will Bolster the Share of Renewable Energy in the Member StatesA new EU directive on renewable energy, agreed in December 2008, requires each member state to increase its share of renewable energy, such as solar, wind or hydro, in the primary energy mix from the current 8.5% to 20% by 2020. A 10% share of 'green fuels' in transport is also included within the overall EU target (EurActiv 05/12/08).As per the binding agreement signed by every nation in the the 27-member EU, the share of renewable energy ought to be increased by 5.5% from 2005 levels by 2020 and the remaining would be calculated based on the Gross Domestic Product (GDP) of the region.There are interim targets set to ascertain the consistent advancement towards the accomplishment of targets by 2020. The interim targets are as follows:20% average between 2011 and 2012; 30% average between 2013 and 2014; 45% average between 2015 and 2016, and; 65% average between 2017 and 2018. The Member countries can choose the preferred mix of renewables to achieve the overall targets. The new proposal mandates the submission of National Action Plans (NAPs) depending on the targets. Moreover, the Member States ought to submit progress reports every two years across electricity, heating and cooling, and transport.Strong and Stable Policy Initiatives Will Drive the Growth of Ethanol and Biofuel MarketsBiofuels account for 5-6% of the total transportation fuels in 2010 and it has not experienced a significant change from 2009. The lack of a stable policy framework for biofuels dissuades investors in this sector. The usage of biofuels has declined after the government withdrew tax exemption for consumers. The use of ethanol and biodiesel in power vehicles would stagnate over the next few years due to insufficient government incentives. Tax breaks would boost the growth of this sector.New Solar Feed-in-Tariffs Will Bolster Spain’s Solar PV Panels MarketIn February 2009, the Spanish government proposed new solar feed-in-tariffs to promote the domestic solar industry. The government has created a register of solar projects to provide new feed-in-tariffs. The proposal was intended to support the solar developers and equipment suppliers. The suppliers and developers have been holding back from investing from October 2008 due to the anticipated announcements. The new tariff program inculcates government-set rates for solar power through long term contracts.A Mature Market Compels Germany to Reduce Feed-in-Tariffs For RenewablesSupportive feed-in-tariffs and financial incentives have driven the growth of the German renewable energy market and transformed it into one of the world’s largest renewable energy market. However, concerns on over-subsidization and relatively stabilized solar PV market have encouraged the German government to reduce the feed-in-tariffs. After repeated retrenchments, in June 2010, Germany announced a 16% cut in feed-in-tariffs, which would be affective from July 2010. Reduced tariffs would be applicable for all rooftop solar panel systems and those built on disused land such as former army bases. Additionally, solar installations on converted arable land will not receive any incentive.Government’s Support Through Financial Programs Propel the Growth of UK’s Offshore Wind IndustryThe UK’s £75 billion program was intended to promote the domestic wind offshore industry. The financial support would be used to build offshore wind turbines for the next phase of renewable power generation in the country. The successful bidders for 25GW (GigaWatt) wind farms across the nine zones in the seas around the UK have been announced. The offshore wind industry will aid in increasing renewable energy products and also create thousands of new jobs. The UK’s immense potential for wind energy has prompted this initiative.GlobalData: Europe Renewable Energy Policy Handbook 2010: http://www.reports-research.com/studien/europe-renewable-energy-policy-handbook-2010-p-117005.html GlobalData: More market data and market reports: http://www.reports-research.com/studien/globaldata-m-304.htmlmarkt-studie.de, founded in 2002 has emerged as a leading online portal for market surveys and market research in German speaking areas. Four years later the English language portal reports-research.com was introduced due to the extraordinary success of the portal. Again one year later estudio-mercado.es - the Spanish spoken portal - was founded. The objective of the three portals is to competently and efficiently support consultants and decision makers in management, sales and marketing in the search for worldwide market research. Prospective buyers can look into more than 60,000 market surveys from more than 200 international publishers, current market data for more than 6,000 branches worldwide, 10,000 company profiles as well as a free-of-charge research and recommendation service for individual market research.reports-research.com c/o dynamic technologies GmbH Siegburger Str. 233 50679 Köln GermanyManuel Bravo Sanchez (CEO)info@reports-research.com or Tel ++49 (0)221 677 897 32 Fax ++49 (0)221 677 897 34

10-02-2018 | Advertising, Media Consulting, …
HTF Market Intelligence Consulting Pvt. Ltd.
Renewable Energy Market Comprehensive Study by Leading Key Players: AREVA Renewa …
HTF MI recently introduced Global Renewable Energy Market study with in-depth overview, describing about the Product / Industry Scope and elaborates market outlook and status to 2023. The market Study is segmented by key regions which is accelerating the marketization. At present, the market is developing its presence and some of the key players from the complete study are EnBW, Duke Energy, Southern Company, Exelon Corporation, Hawaiian Electric, RWE Group,
10-01-2018 | Advertising, Media Consulting, …
SRES
Transforming Saudi’s Renewable Energy
The National Renewable Energy Program is trending in Saudi. The program is designed to achieve long-term economic stability and prosperity in the KSA. The Kingdom is targeting the generation of 3.45 gigawatts (GW) of renewable energy by 2020 and 9.5GW by 2023. The vision is supported by an abundant solar resource, land availability, an A-rated sovereign credit, & a strong economy. Understanding the existing situation in Saudi, the SRES initiative brings
06-30-2017 | Energy & Environment
Kuick Resarch
India Renewable Energy Sector Analysis
Renewable energy contributes substantially to the total power generation capacity in India. In fact in FY’2012, only about 56% of the total electricity produced used coal as the source of fuel to generate electricity, 20% power was produced by hydro or water based sources, 12% electricity was generated using renewable energy sources and gas contributed 9% to the total power generation. while 2% and 1% contribution came from nuclear
06-29-2017 | Energy & Environment
Kuick Resarch
Emerging Renewable Energy Implementation in GCC
GCC region is shifting focus from its most prized asset, hydrocarbons. Oil and gas, though, still dominates the trade in and out of the GCC Region but it is looking to develop its renewable sources of energy as well. All the GCC countries have started to take the renewable energy way, contrary to their most important possession, non renewable (Hydrocarbons). The growing economy with growing population has affected a growth
10-28-2011 | Energy & Environment
Renewable Energy Markets Association
Renewable Energy Markets Association (REMA)
WASINGTON, October 27, 2011 - Illustrating its voice and breadth in the renewable energy markets, the Renewable Energy Markets Association (REMA) today welcomed its newest member, EDP Renewables North America (EDPR NA). Based in Houston, TX, EDPR NA (formerly known as Horizon Wind Energy) develops, constructs, owns and operates wind farms throughout including over 20 wind farms across the United States. The addition of EDPR NA to REMA's membership represents
04-12-2011 | Business, Economy, Finances, B …
InfraNews
Sector Spotlight - Q1 2011 Renewable Energy Roundup
By Peter Kneller Regulatory changes formed a large part of the news in the renewable energy sector in Europe in the first three months of the year, with incentive systems in France, Italy and the UK all being the subject of alterations. On the deals side, utilities’ sales of equity stakes in offshore wind farms continued with Dong selling off a 50% share in Anholt to Danish pension funds, while in
Comments about openPR
OpenPR is clearly structured and remains true to its principle of confining itself to the essential parts. OpenPR has proven to be a very good and reliable partner to our media agency: Within the shortest time the releases are online and go down well with the media representatives. The success of OpenPR is reflected in the steadily increasing number of press releases. It is good that OpenPR exists!
Ursula Koslik, Director Marketing & PR, F+W Hamburg