Canadean: New Zealand - The Future of Foodservice to 2016 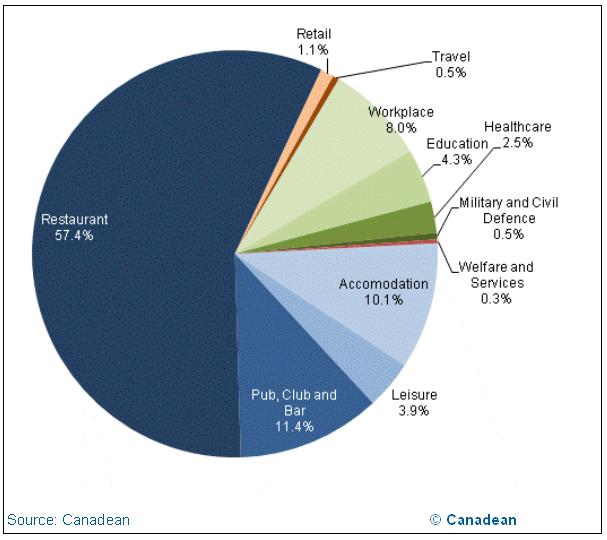 The New Zealand foodservice market recorded a CAGR of 1.43% during the review period. Per capita sales increased at a review period CAGR of 0.38%. In 2011, the profit sector contributed 92.1% to the country’s total foodservice sales and posted a per capital sales CAGR of 0.33%. Growth in the profit sector is attributable to the growth in the restaurant channel which grew by a CAGR of 1.56%. In contrast, the cost sector accounted for 7.9% of New Zealand’s total foodservice sales in 2011, recording a CAGR of 1.47% (reference see graph below).The number of transactions in the New Zealand foodservice industry recorded a CAGR 0.95% during 2006–2011 as a result of a growing shift towards smaller households, couples without children, one parent families and working families. Following the global financial crisis in 2008, growth in the sector decelerated. However, growth is projected to rebound over the forecast period and be driven primarily by an expected increase in dining out. A growth in the number of single person households and an increase in citizen’s disposable incomes are forecast to drive growth in the market.Increasing concerns regarding the health issues surrounding fast food and a greater awareness of healthy lifestyle choices are being reflected in the addition of healthier options to restaurant menus. The trend is being followed not only in the fast food segment but also in full-service restaurants and the education sector, and is expected to continue with a government-driven emphasis on healthy food over forecast period. Going forward the government are expected to implement laws regarding menu labeling in the restaurant segment, especially in fast food outlets, similar to the laws passed in the US.New Zealand’s economy has registered a subdued growth rate during the recent global financial crisis, which also affected the country’s foodservice industry. Primarily due to a change in economic conditions and a reduction in consumer expenditure, demand for the out-of-home cooked food market was adversely affected. In addition, consumers preferred to trade-down to less expensive outlets and opted for value foodservices providers.Bars and restaurants have been adversely affected by the increase of the sale of cheap alcohol in supermarkets. The growth in sale of alcohol from supermarkets has prompted the Hospitality Association to lobby for a ban on alcohol sales from these establishments, as they deem the sale of cheap alcohol as promoting binge drinking.Growth in levels of disposable income, a thriving tourism sector and a projected increase in the number of single person households are all factor forecast to support a growth in foodservice sales. Interestingly, eating-on-the-go is becoming increasingly prevalent and fine dining is being substituted for casual dining, which is forecast to increase the number transactions in the restaurants channel, which represents 60% of the country’s total foodservice sales.Tourism accounted for 10% of the country’s GDP and acted as a source of employment for a considerable amount of the population. The high inflow of travelers adds to the performance of the foodservice industry through increased sales in the various channels, primarily the accommodation, restaurant, leisure overall, and pubs, clubs, and bars channels. Leisure travel and tourism spending remained positive despite of the global financial crisis and recent earthquakes.ICD Research - New Zealand: The Future of Foodservice to 2016: http://www.reports-research.com/market-surveys/zealand-foodservice-future-foodservice-2016-p-266913.html ICD Research - Further Market Reports: http://www.reports-research.com/market-surveys/canadean-m-376.htmlmarkt-studie.de founded in 2002 has emerged as a leading online portal for market surveys and market research in German speaking areas. Four years later the English language portal reports-research.com was introduced due to the extraordinary success of the portal. Again one year later estudio-mercado.es - the Spanish spoken portal - was founded. The objective of the three portals is to competently and efficiently support consultants and decision makers in management, sales and marketing in the search for worldwide market research. Prospective buyers can look into more than 120,000 market surveys from more than 300 international publishers, current market data for more than 6,000 branches worldwide, 10,000 company profiles as well as a free-of-charge research and recommendation service for individual market research.reports-research.com c/o dynamic technologies GmbH Agrippinawerft 6 50678 Köln GermanyManuel Bravo Sanchez (CEO)info@reports-research.com or Tel ++49 (0)221 677 897 32 Fax ++49 (0)221 677 897 34

You can edit or delete your press release Canadean: New Zealand - The Future of Foodservice to 2016 here

05-11-2021 | Business, Economy, Finances, B …
PROLIM
PROLIM expands into Australia and New Zealand
Plano, Texas, Detroit, MI, Melbourne, Australia – May 11, 2021– PROLIM Global Corporation (“PROLIM”) announced today that it has acquired Melbourne, Australia-based Edge PLM (“Edge PLM”) Software Pty Ltd. Founded in March 2004, with over 330 customers, Edge PLM provides customers across Australia and New Zealand with world-class digital design, simulation, test, manufacturing and data management software and service solutions. Edge PLM specializes in the supply, integration, consulting, and training of
02-18-2021 | Advertising, Media Consulting, …
Ken Research Pvt Ltd
New Zealand Agriculture Market, New Zealand Agriculture Industry, New Zealand Ag …
Agriculture has always been of boundless importance for the New Zealand, as feeding the world’s prime population is not a relaxed task. The New Zealand government has been associate the agriculture industry with an effective amount of policies, demanding to stabilize the output and seeking ways to make sure the sector is growing healthily and sustainably. The New Zealand federal government has been decidedly supportive of agriculture for decades, and
08-03-2018 | Science & Education
MakeMyAssignments.com
MakeMyAssignments.com provides customized help in New Zealand
We all cherish the countless memories of school life and college life. It reminds us of the fun-filled, stress free days. But one thing that bothers every child during this blissful tenure is the workload that is infused on them. Many a times, the amount of work is unreasonably high that it totally takes away all the frolic and induces a sense of helpless and a will to escape. Students
09-19-2017 | Industry, Real Estate & Constr …
Orbis Research
Retailing in New Zealand
Summary This report helps to analyze competitive developments such as joint ventures, strategic alliances, mergers and acquisitions, new product developments, and research and developments in the Retailing in New Zealand Description Retailing in New Zealand experienced a positive performance in 2016, driven by the strong demand for domestic and international goods and services. This owed much to continuing economic recovery, the improvement in employment and the rise in migrants, especially in major cities
09-13-2017 | Science & Education
GlobeMetrix
Global Lixisenatide Market 2017- Sanofi-Aventis, Zealand
The Report entitled Global Lixisenatide Market 2017 analyses the crucial factors of the Lixisenatide market based on present industry situations, market demands, business strategies adopted by Lixisenatide market players and their growth scenario. This report isolates the Lixisenatide market based on the key players, Type, Application and Regions. The Lixisenatide industry research report mainly focuses on Lixisenatide industry in global market. The major regions which contribute to the development of Lixisenatide
09-12-2017 | Fashion, Lifestyle, Trends
Market Research Future
Manuka Honey Market Key Players: Comvita Limited (New Zealand), Watson & Son Ltd …
Market Research Future published a Half Cooked Research Report (HCRR) on Global Manuka Honey Market which is estimated to grow more than 4.3% during the period 2017-2023 Competitive Analysis- The major key players in Manuka Honey Market are Comvita Limited (New Zealand) Watson & Son Ltd (New Zealand) Manuka Health (New Zealand) API Health (New Zealand) Wedderspoon (New Zealand) Mossops Honey (New Zealand) Cammells Honey (New Zealand) Manuka manufacturers across various regions follow the strategy of improving their existing product
Comments about openPR
OpenPR is clearly structured and remains true to its principle of confining itself to the essential parts. OpenPR has proven to be a very good and reliable partner to our media agency: Within the shortest time the releases are online and go down well with the media representatives. The success of OpenPR is reflected in the steadily increasing number of press releases. It is good that OpenPR exists!
Ursula Koslik, Director Marketing & PR, F+W Hamburg